Dependency injection is a set of software design principles and patterns that enables us to develop looselyÂ coupled code, it is also one of the most misunderstood concepts in the object oriented programming. The Dependency injection pattern is strictly related to SOLID principles, for more information:Â SOLID principles using Typescript The main purpose of the DI is the maintainability through the loose coupling technique, here is some benefits gained form the loose coupling:

Services can be swapped with other services, late binding refers to the abilityÂ to replace parts of an application without recompiling code. For example, the following case allows developers to refers the interface IDataProvider and switch between an relational database and a NoSQL database without change the code: 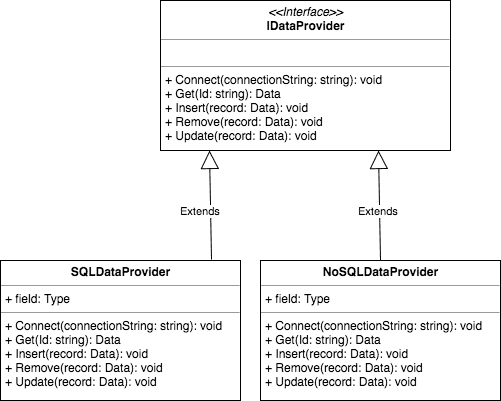 Code can be extended and reused, and the responsibility of each class becomesÂ clearly defined. Finally, adding a new features Â is more easy because the structure of code allows developers to understand where apply changes.

DI isÂ an important part of supporting unit testing. Unit tests provide a rapid feedback on the state of an application, but it is only possible to write unit test when the unit can be properly isolated from it's dependencies. By using DI, developers have the capability to inject dependencies and mocks inside the application code toÂ test an specific part of application without affecting others.

Here is a simple example of mocking for unit testing:

DI container is a software library that can automate many of the tasks involved in composing object and managing their lifetimes. The DI containers usually expose a Resolve method: it resolves instances of arbitraryÂ types. The DI containers know how to compose the requested type by using a sort of configuration or registration point where you map the abstractions(or interfaces) to concrete types. Finally, DI containers inherently compose object graphs by combining their own configuration with the information Â from classes constructors*.*

There are 3 ways to configure DI containers:

There are some patterns that describe the right way to use DI containers:

Constructor injection should be your default choice for DI. It addresses the most common scenario where a class requires one or more dependencies, and no reasonable local defaults are available.

When a dependency is optional we can expose a writable property that allows a client to supply a different implementation of the class's dependency than the default.

Property injectionÂ
should only be used when the class you're developing has a good local default and you still want to enable callers to provide different implementations of the class'sÂ dependency.

The caller supplies the dependency as a method parameter in each method call, for example:

Method injectionÂ is best used when the dependency can vary with each method call. This can be the case when the dependency itself represents a value, but is often seen when the caller wishes to provide the consumer with information about the context in which the operation is being invoked.

Dependency injection isÂ the best way to enable loose coupling, an important part of maintainable code. The benefits we can see from loose coupling are notÂ always immediately apparent, but they become visible over time during the maintenance phase. Â Cheers :)

Samuele Resca is an Microsoft MVP Visual Studio and Development Technologies, Software Engineer, specializing mainly on ASP.NET MVC and in general about everything that revolves around the web. Samuele was born in 1994, and works as a software developer @ YOOX NET-A-PORTER Group He loves the MVC frameworks, ASP.NET MVC, Javascript, Node.js and Typescript.

What the heck is polymorphism?

Protect your system from changes in 3rd party dependencies

Build a Fluent Interface in Java in Less Than 5 Minutes