Typescript is a language created by Microsoft and released under an open-source () Apache 2.0 License. The language is foused on making the development of Javascript programs scale to many thousand lines of code. The language attacks the large-scale Javascript programming problem by offering better-design time tooling, compile-time checking and dynamic module loading at runtime. The typescript language is a typed superset of Javascript, which is compiled to plain Javascript. This makes programs written in Typescript highly portable as they can run on almost any machine, web browser, web server and NodeJs.

Which problems does Typescript solves?

Typescript solves a lot of problems, especially in the following areas:

Coffescript.org is an alternative to Typescript, its syntax is similar to Python, infact it's a very different language to JavaScript. Another alternative is Google's Dart language. Dart has much more in common with Typerscript, you can find more information here. I alsoÂ recommend you to read this presentationÂ written by Neil Green, it compares Typescript, CoffeeScript and ES6. 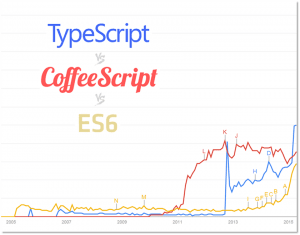 Credits: neilonsoftware.com[/caption] Typescript is an application-scale programming language that provides early access to proposed new Javascript features and powerful additional features. Typescript is useful in large-scale applications that have an OOP approach, classes and interfaces can be re-used between browser and server applications. Typescript is becoming more and more widespread, and it's also used by a lot of companies and frameworks such as Angular JS. Obviously, typescript is 100% integrated withÂ Visual studio , but it also can be integrated with other tools such as Webstorm, Eclipse, Sublime Text, Visual Studio Code and Atom;Â Typescript can be compiled using Node.js.

Getting started: Typescript and Grunt

GruntJS is a JavaScript task runner, used by a lot of frameworks and plugin to automate some tasks. Typescript can be combined with GruntJS: it watch changes performed on Typescript files and compile typescript files into JS files. The following demoÂ shows how to setup the enviroment to develop Typescript applications.

GruntJS and Typescript run on NodeJS, You can install node from here.

Firstly, let's create a new folder, which will contain the project and type the following command:

It will create the package.json file which will contains all informations about installed packages and dependencies.

Here's the final package.json, it declares all devDependencies required by Typescript: https://gist.github.com/e47a5e2c7e14557a77df You can copy the devDependencies section inside your package.json and launch the following command to solves all typescript dependencies: 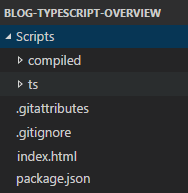 inside the project folder.

Here's the source code used or main.ts file, it will compiled into main.js file and included by index.html page: https://gist.github.com/1fce4d97db00faf6ddd2

The post simple introducing Typescript, there is the complete references guide on official site, all code used in this demo is shared on Github. Cheers :)

Samuele Resca is an Microsoft MVP Visual Studio and Development Technologies, Software Engineer, specializing mainly on ASP.NET MVC and in general about everything that revolves around the web. Samuele was born in 1994, and works as a software developer @ YOOX NET-A-PORTER Group He loves the MVC frameworks, ASP.NET MVC, Javascript, Node.js and Typescript.