React or React JS is a JavaScript front-end library from Facebook which lets you create HTML based GUI. It makes the task easier by providing a component-based architecture that was only available to languages like Java and C# before.

Because of this awesome feature, React is quickly becoming the standard JavaScript library for developing front-end. That’s the reason many programmers and developers are learning React or React JS.

But, the big question is how do you learn React? Where should you start? Honestly, I wasted a lot of my time searching for the best material to get started. Watched Tons of youtube videos never completed one, because I was not aware of the fundamental prerequisites of React JS.

In this article, I'm going to take you through the journey of how I started with React JS from just knowing HTML, CSS, and JavaScript(vanilla).

This article is a bit long, but believe me, after completing you'll get started with React JS right away.

React is a front-end library developed by Facebook. It is used for handling the view layer for the web and mobile apps. ReactJS allows us to create reusable UI components.
Unlike AngularJS, React is not a framework, rather it is an open-source library created by FACEBOOK.
React allows developers to create/compose large web applications with complex UIs from small and isolated pieces of code called “components” which can change data, without reloading the page. 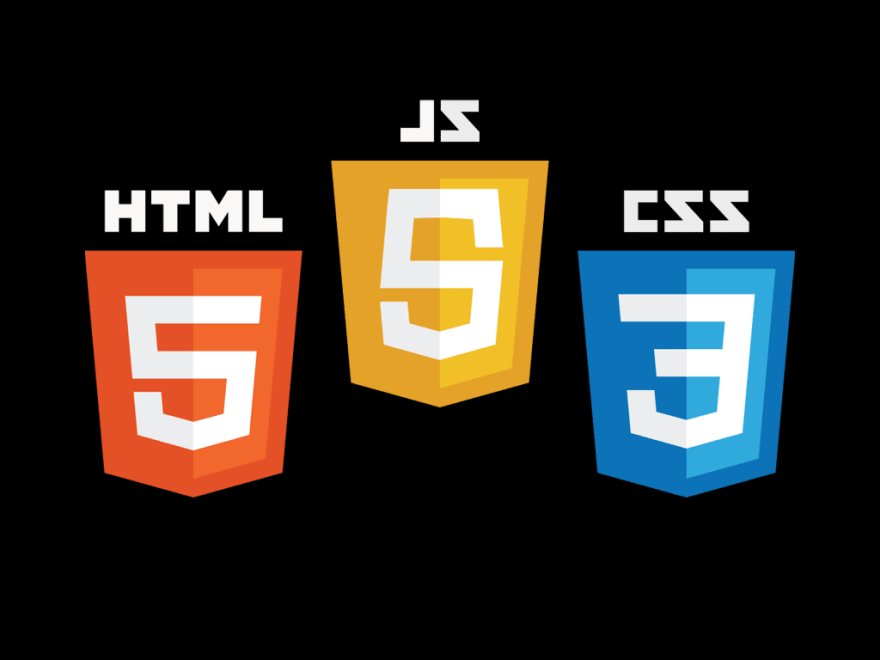 If you want to work with ReactJS, you need to have a solid knowledge of JavaScript, HTML5, and CSS. Even though ReactJS doesn't use HTML, the JSX is similar so your HTML knowledge will be very helpful.

In traditional web application programming, for even a small change in the webpage, the whole page is reloaded. This makes the web pages slower than they should be.

However, ReactJS solves this problem by only updating what’s necessary.

Before moving further, let’s set up our code. Make sure you have the latest LTS version of Node and npm installed. We’ll use React CLI to help us set up projects easily and run our app using a built-in development server. Create React App comes prefigured with a webpack, along with a plug-in system to run tools like Babel. First, we need to install React CLI. Head over to your terminal then type: 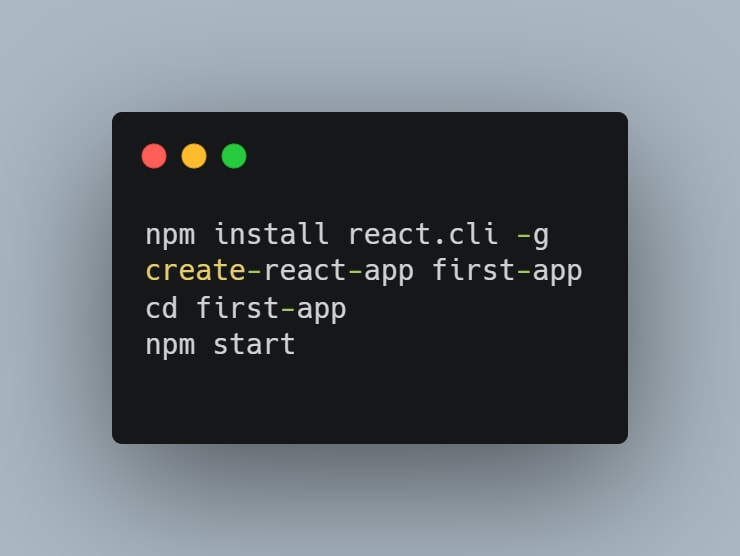 npm install react.cli -g command will install React CLI globally on your system, and create-react-app sets up a new React project. A project named first-app with some files inside it gets created at the required destination. npm start runs the project in a development server on localhost:3000. 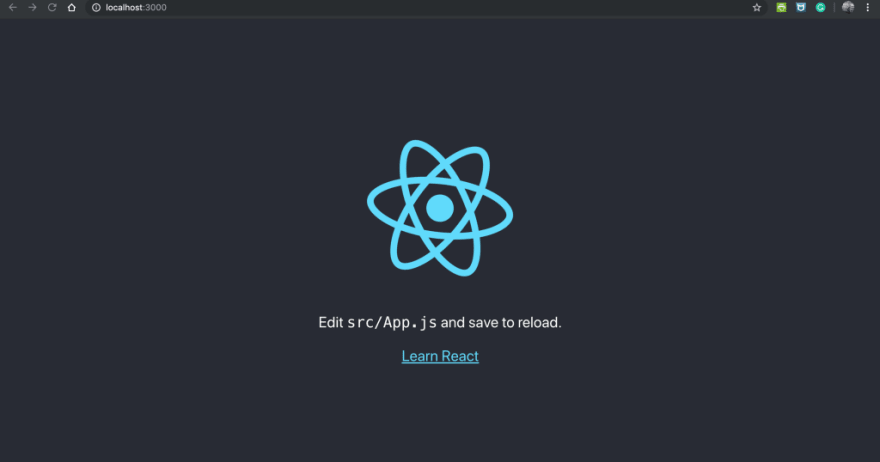 The React project file structure should look something like:

All the JavaScript we create will go into the src folder. The React logo on the screen is rendered through App.js where we are outputting the logo.svg. Let’s get rid of these files. Delete App.css (this is just a local CSS file for App.js), App.test.js (you won’t need it for quite a few days), and logo.svg. Now lets head over to App.js and type the below code into it. 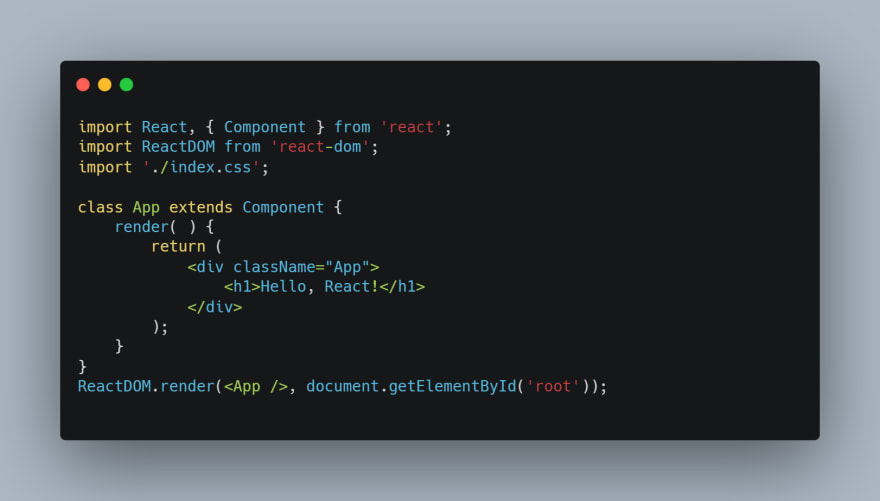 Now if you go back to the localhost:3000, you’ll see “Hello, React!”. We have the beginnings of a React app now.

What is JSX and Rendering in React?

React uses JSX for templating instead of regular JavaScript. It is not necessary to use it, however, the following are the advantages that come with it:

The following code in App.js renders "Hello, World!!!" on the screen. 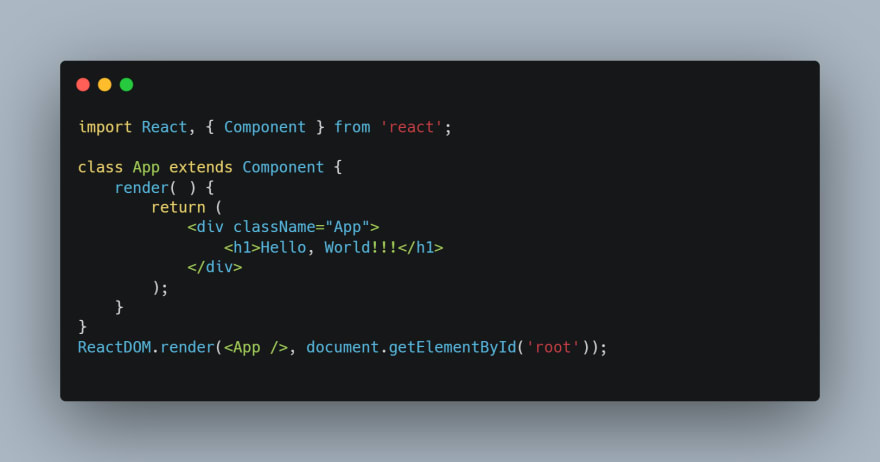 JavaScript expressions can be used inside JSX. We just need to wrap it with curly brackets {}. The following example will render 2. 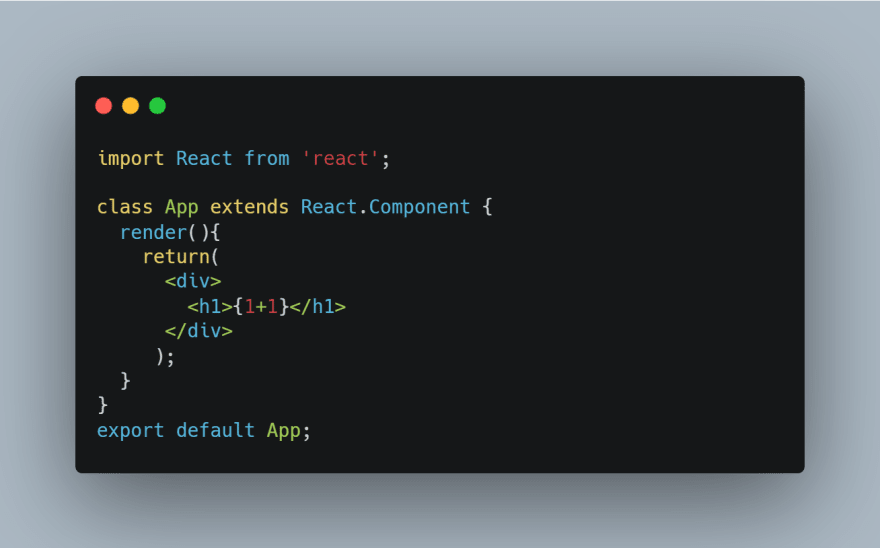 Let’s say there is a "div" somewhere in your HTML file.
Eg:

Know more about Rendering Elements in React at JavaScript XML-JSX.

React is designed around the concept of reusable components. You define small components and you put them together to form bigger components. 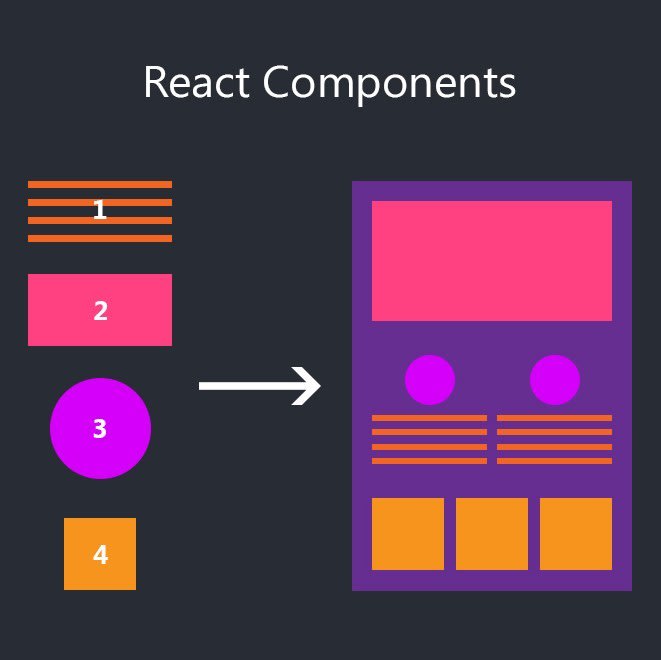 Components in React basically return a piece of JSX code which tells what should be rendered on the screen. In React we mainly have two types of components: 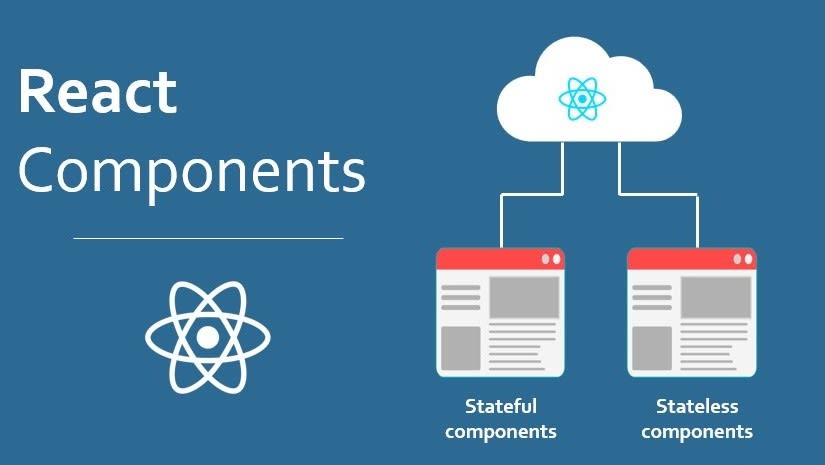 i) Functional Component or Stateless Component: 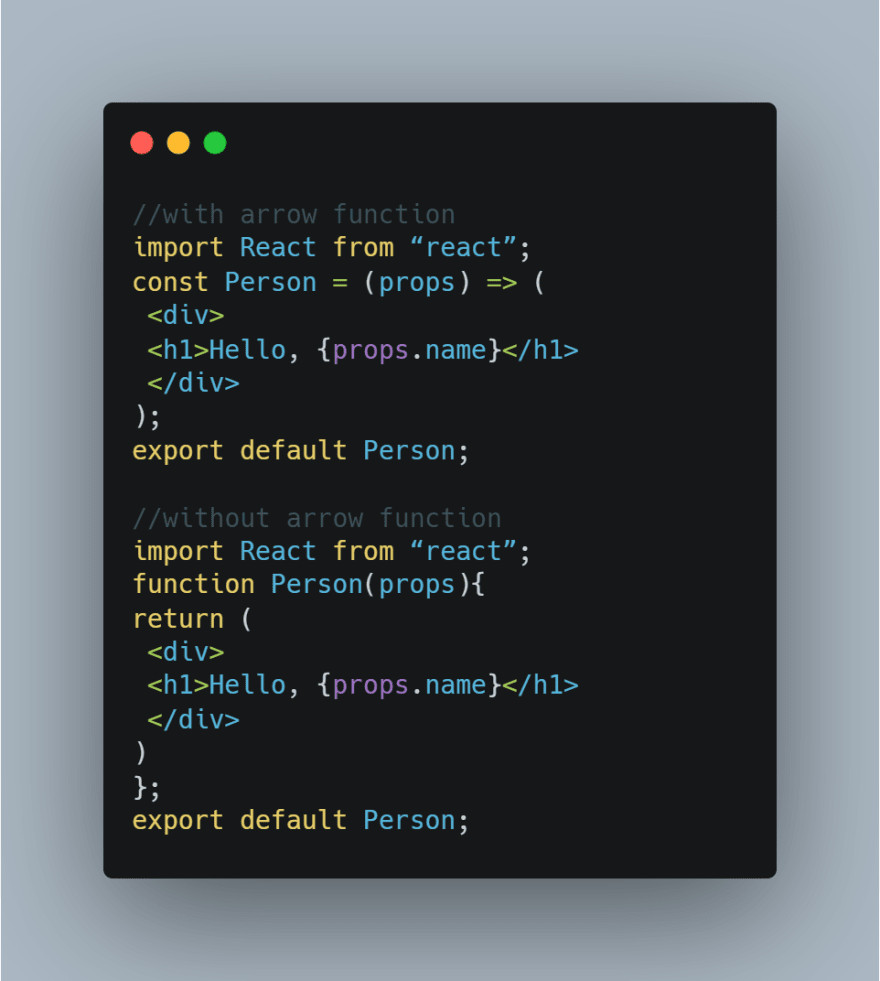 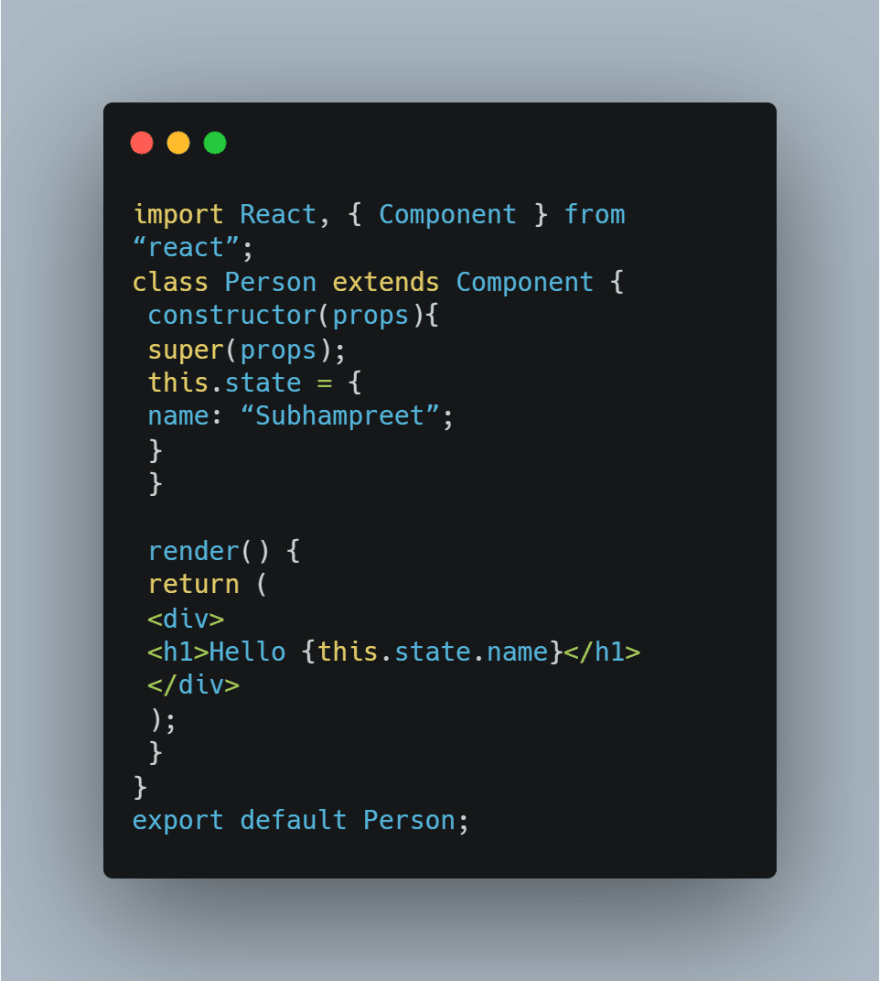 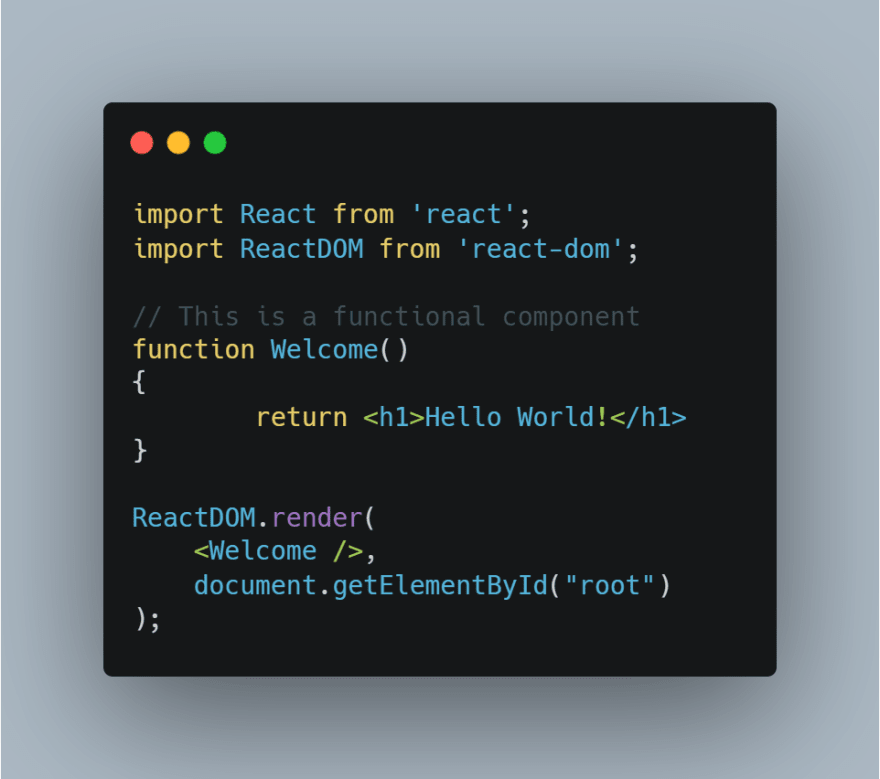 Let us see step-wise what is happening in the above example:

Know more about components and props at Components in React JS.

props and state in React JS: 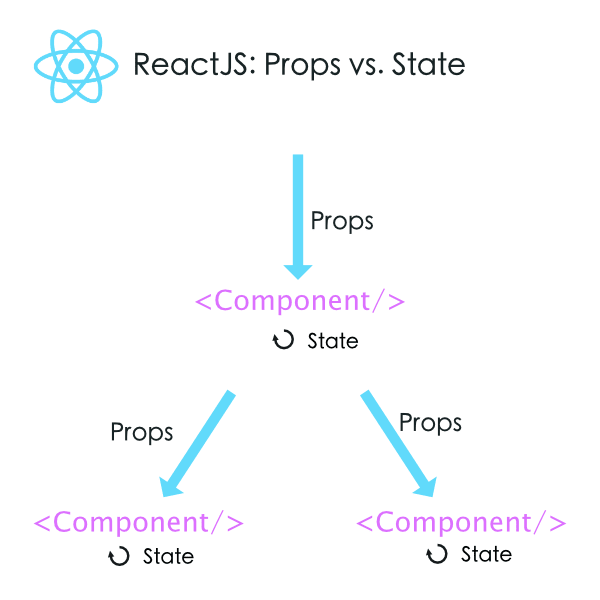 Props are short for properties and they are used to pass data between React components. React’s data flow between components is uni-directional (from parent to child only).

How do you pass data with props? 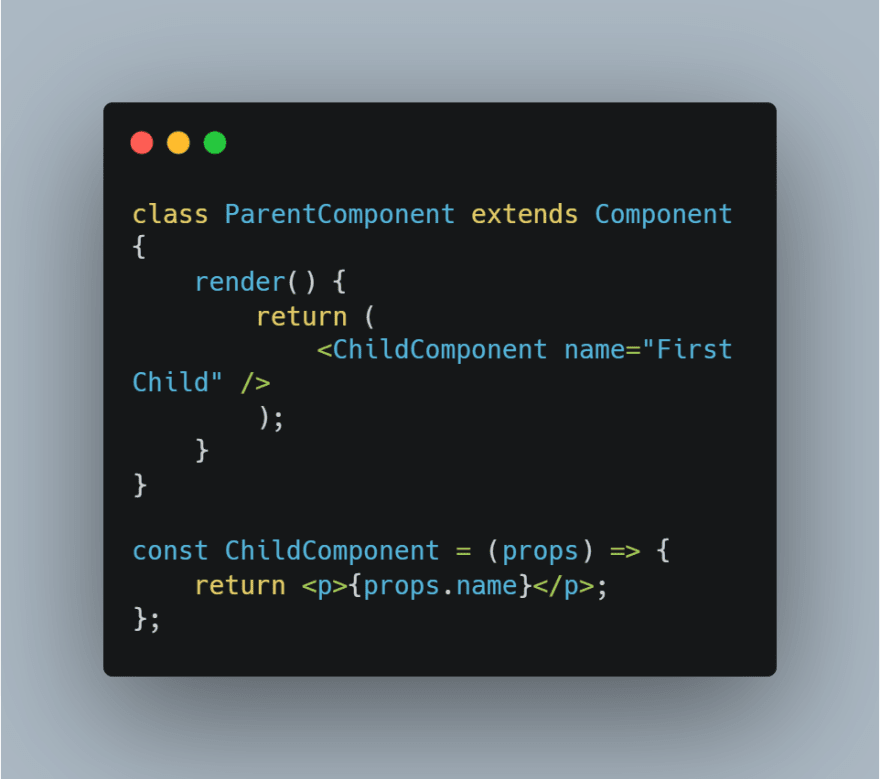 Firstly, we need to define/get some data from the parent component and assign it to a child component’s “prop” attribute.

“Name” is a defined prop here and contains text data. Then we can pass data with props like we’re giving an argument to a function: 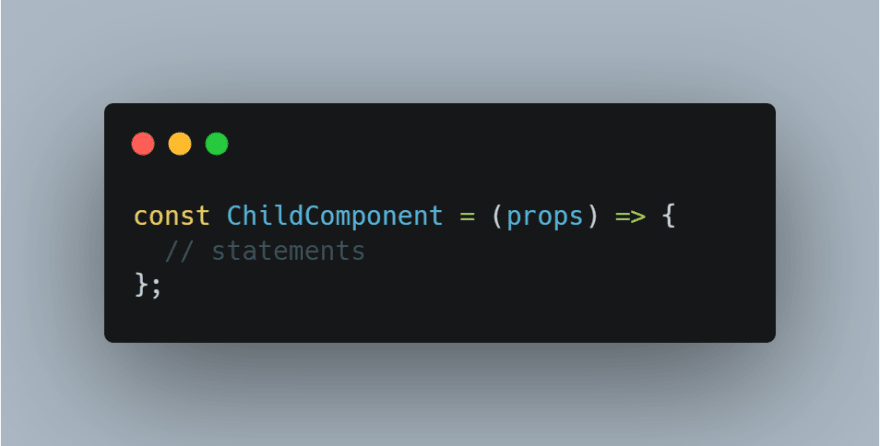 And finally, we use dot notation to access the prop data and render it: 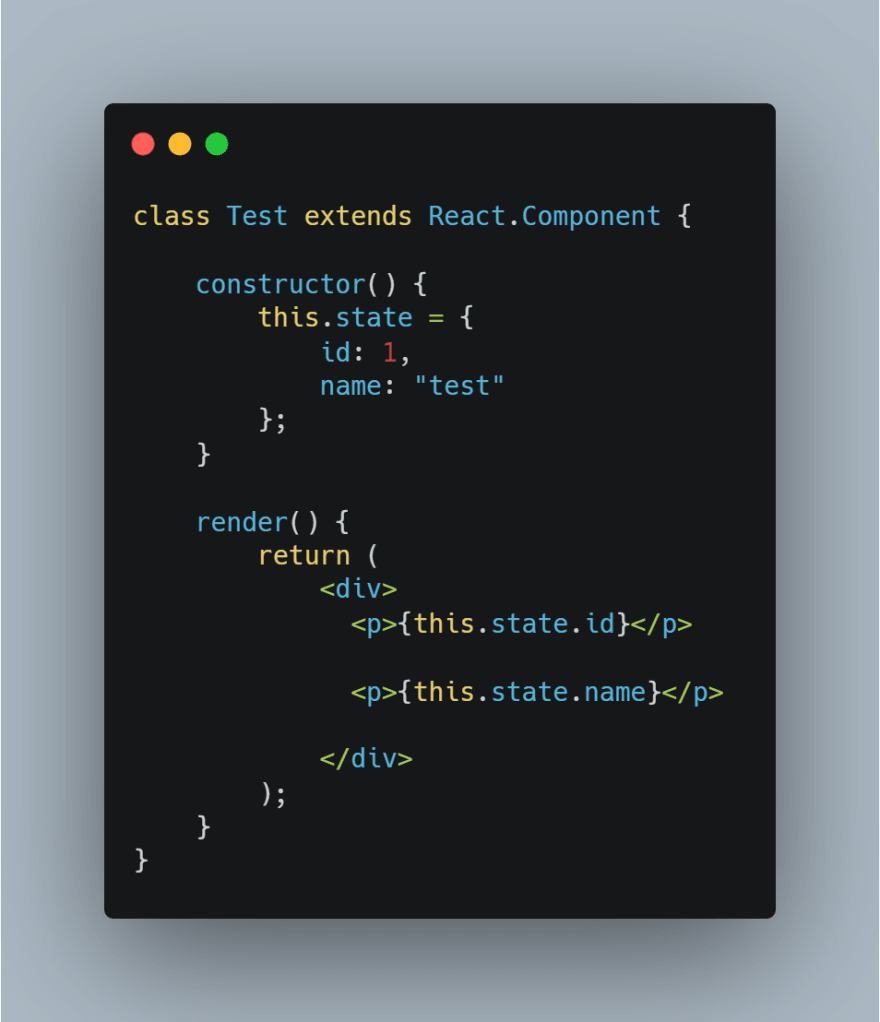 How do you update a component’s state?

State should not be modified directly, but it can be modified with a special method called setState( ). 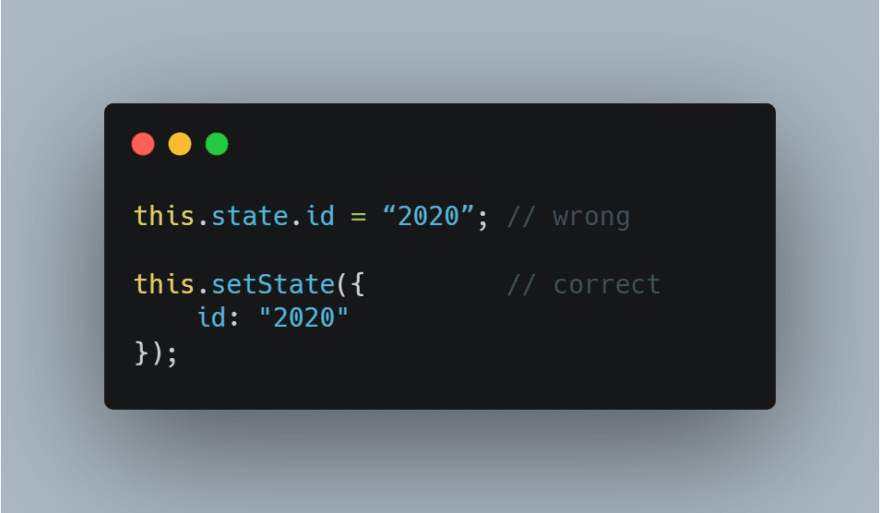 What happens when state changes?

A change in the state happens based on user-input, triggering an event, and so on. Also, React components (with state) are rendered based on the data in the state. State holds the initial information.

So when state changes, React gets informed and immediately re-renders the DOM – not the whole DOM, but only the component with the updated state. This is one of the reasons why React is fast.

And how does React get notified? You guessed it: with setState( ). The setState( ) method triggers the re-rendering process for the updated parts. React gets informed, knows which part(s) to change, and does it quickly without re-rendering the whole DOM.

React component lifecycle executes in three different intervals/phases. These three phases are Mounting, Updating, and Unmounting. Within these phases, there are methods called Lifecycle hooks that happen in a particular order.

A React Component can go through four stages of its life as follows. 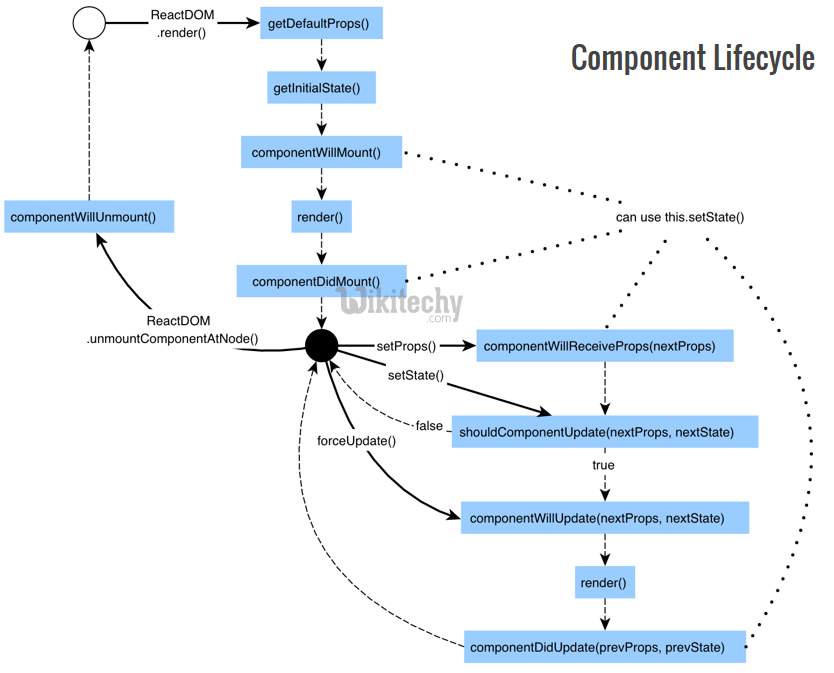 Functions of each Phase of Lifecycle 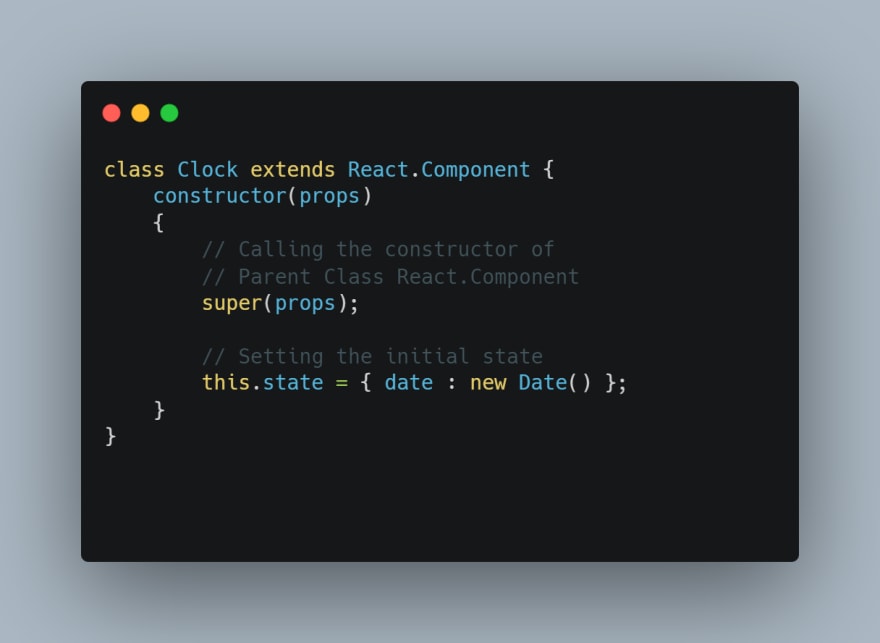 Updation: React is a JS library that helps create Active web pages easily. Now active web pages are specific pages that behave according to its user. For example, let’s take the GeeksforGeeks {IDE} webpage, the webpage acts differently with each user. User A might write some code in C in the Light Theme while another User may write a Python code in the Dark Theme all at the same time. This dynamic behavior that partially depends upon the user itself makes the webpage an Active webpage. Now how can this be related to Updation? Updation is the phase where the states and props of a component are updated followed by some user events such as clicking, pressing a key on the keyboard, etc. The following are the descriptions of functions that are invoked at different points of Updation phase.

For example, the HTML:

is slightly different in React:

Another difference is that you cannot return false to prevent default behavior in React. You must call preventDefault explicitly. For example, with plain HTML, to prevent the default link behavior of opening a new page, you can write:

In React, this could instead be: 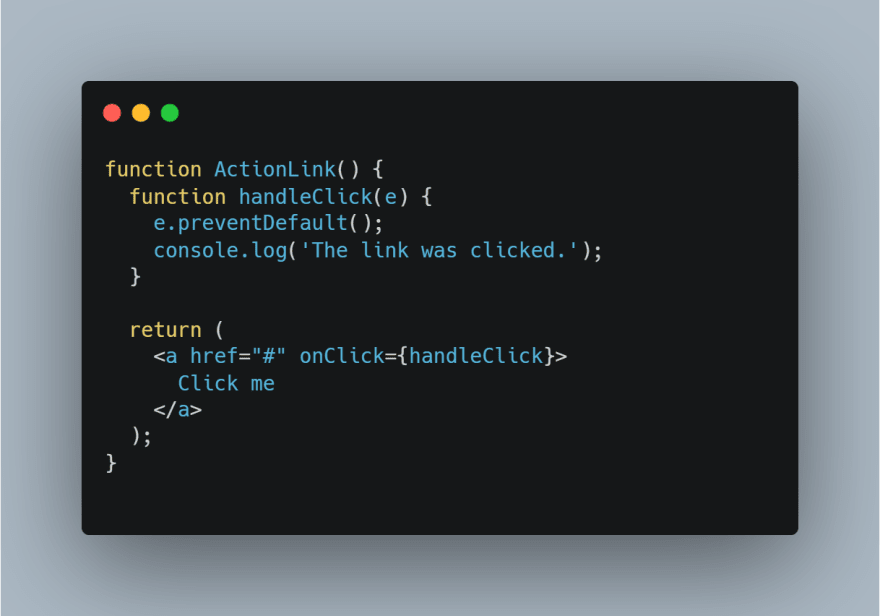 Here, e is a synthetic event. React defines these synthetic events according to the W3C spec, so you don’t need to worry about cross-browser compatibility.

When using React, you generally don’t need to call addEventListener to add listeners to a DOM element after it is created. Instead, just provide a listener when the element is initially rendered.

Know more about Event Handling in React and passing arguments to it at Handling Events-React. 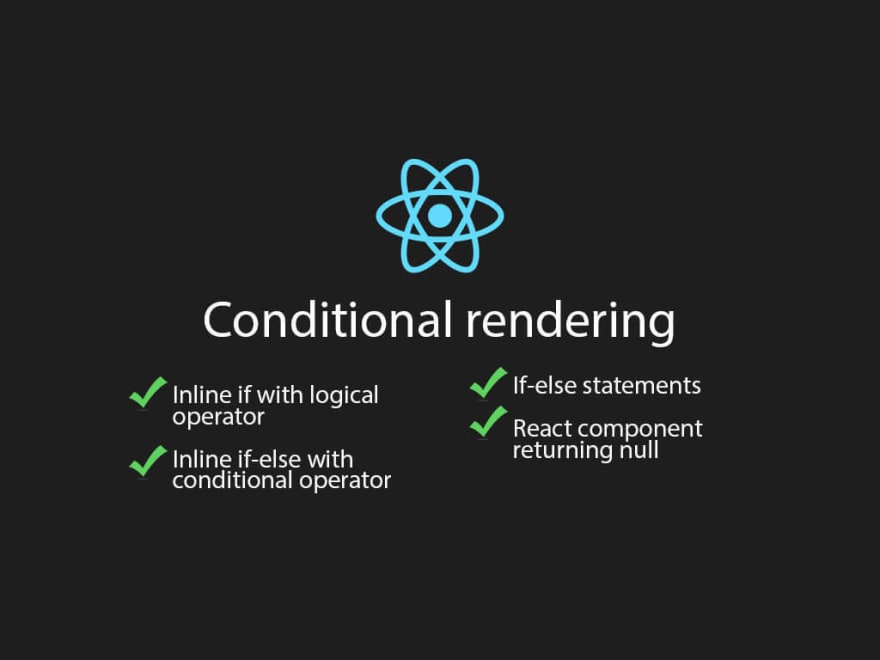 While developing an application in React or any other JS library/ framework, it is a common use case to show or hide elements based on certain conditions. It can be a simple user interaction — say, we need to show a popup when a user clicks a certain button and hide it when (s)he clicks the cross icon. To quote another example, think authentication — we make a ‘log out’ button visible when (s)he is logged in and make ‘Login/Sign up’ form visible for the opposite situation. This process of executing logic or rendering UI elements basis certain conditions is called conditional rendering.

Conditional rendering in React can be carried out using the following methods:

Conditional rendering in React works the same way conditions work in JavaScript. Use JavaScript operators like if, and let React update the UI to match them. We use an if with our condition and return the element to be rendered. 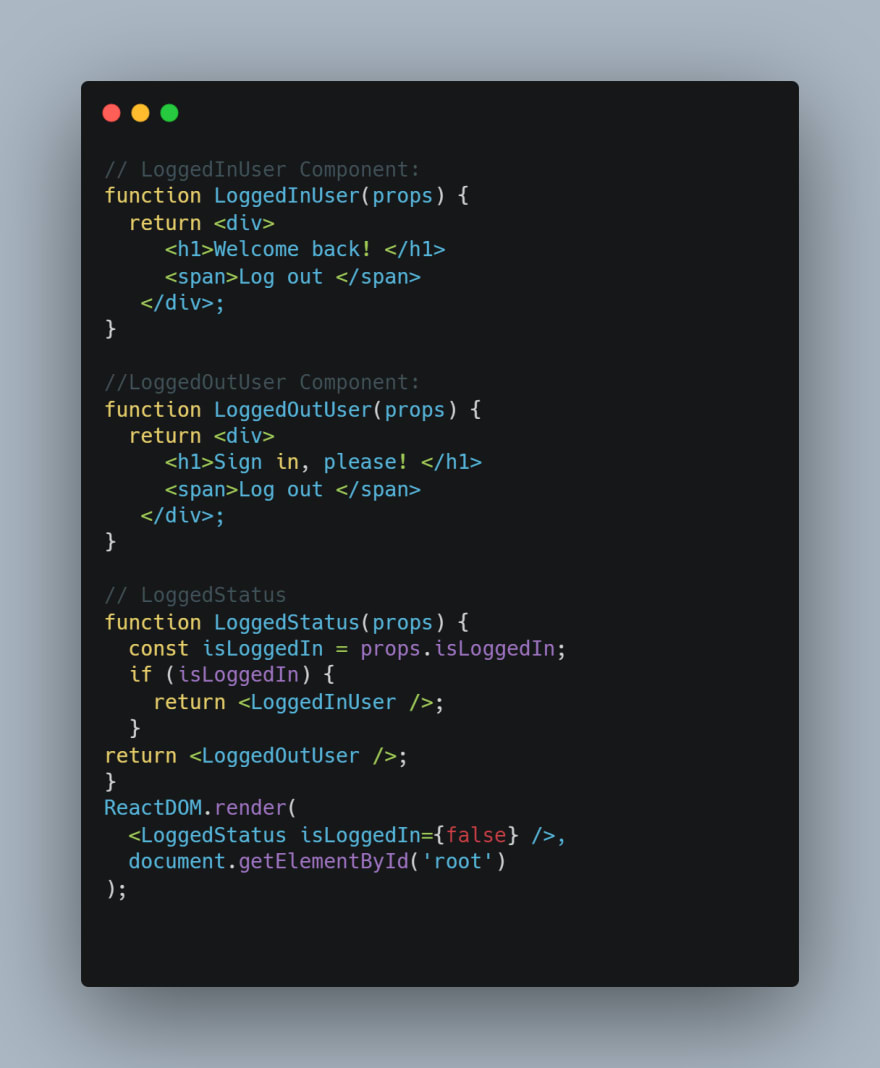 The LoggedStatus component displays either of these components depending on whether a user is logged in or not. A different greeting is rendered depending on the value of isLoggedInprop.

Consider this use case — Show an “Update” button when an edit has been made, else, show the “Edit” button. 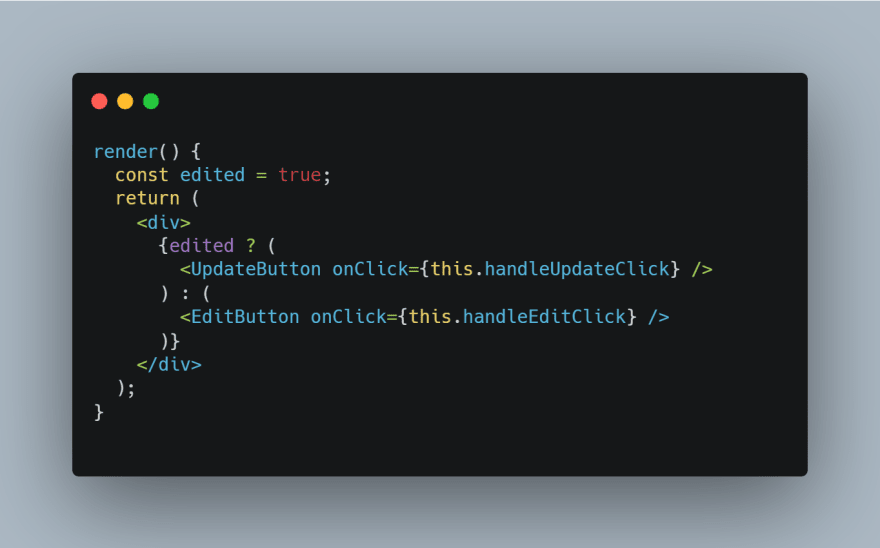 In the above example, when “edited” is true, we’ll show the “Update” button to the user. If “edited” is false, the “Edit” button is rendered.

Inline If with Logical && Operator

&& is a boolean operator, which essentially means “and”. For the condition to evaluate to true, both of the statements must be individually true.
Below is an interesting example. Let’s say we want to render a message saying “You have X tasks to do”. When there are no pending tasks, no message should be displayed. 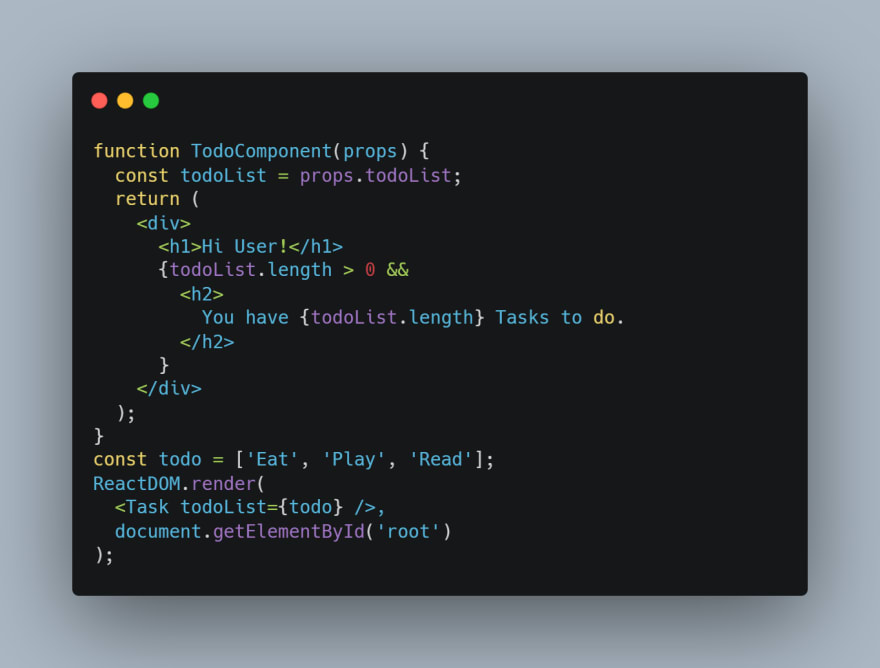 We can write switch case inline just like normal Javascript for conditional rendering in React. However, you would need a self-invoking JavaScript function. 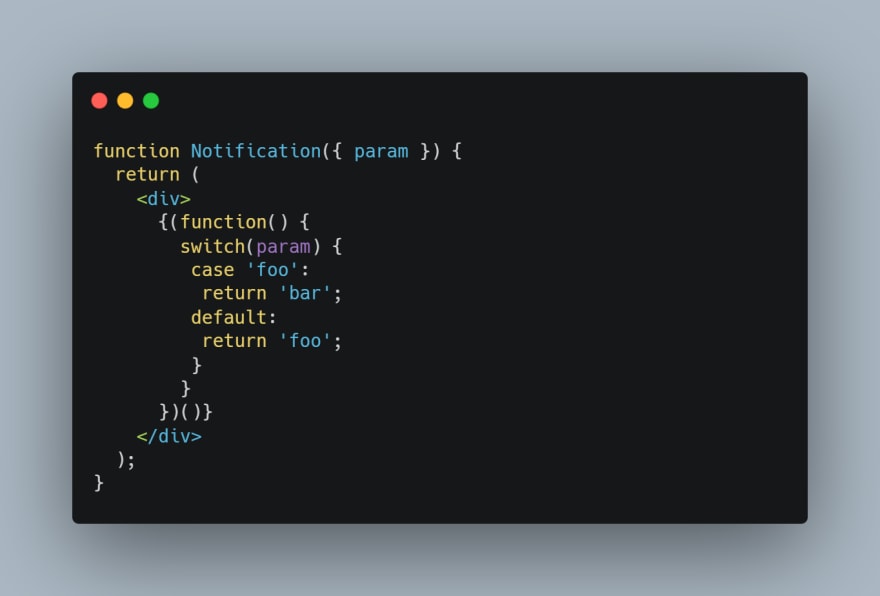 Note carefully though that you always have to use default for the switch case operator since, in React, a component always needs to return an element or null.

To make it cleaner, we can get the switch out of the render in a function and just call it passing the params we want. 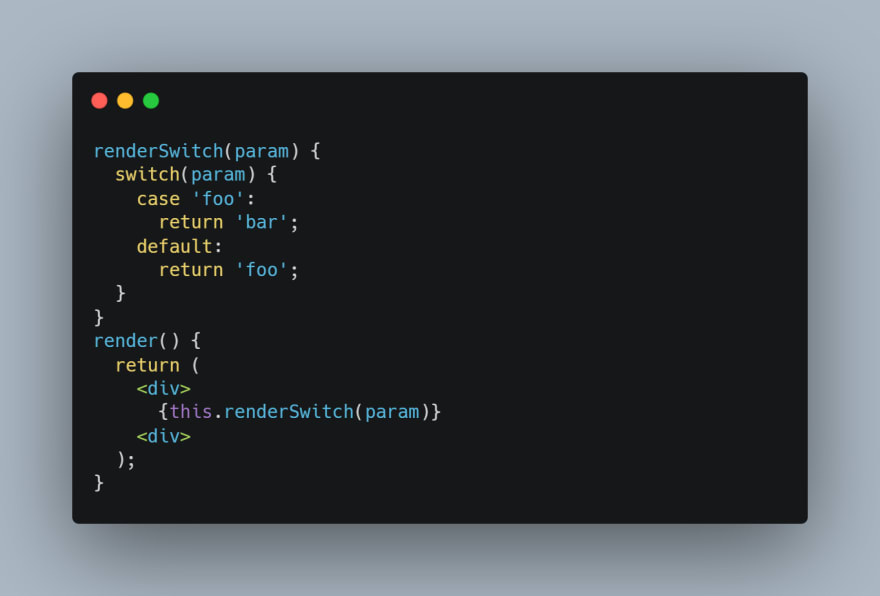 The switch case operator helps us to have multiple conditional renderings.

Higher order components or HOCs are often considered a difficult pattern to grasp in ReactJS. HOCs can be used for multiple use cases, however, in this article, we’ll be picking up HOC for conditional rendering.

HOCs are a perfect match for conditional rendering in React and can have several use cases. One of them can be to alter the look of a component. To make it more specific, it can be used to conditionally render the component itself. 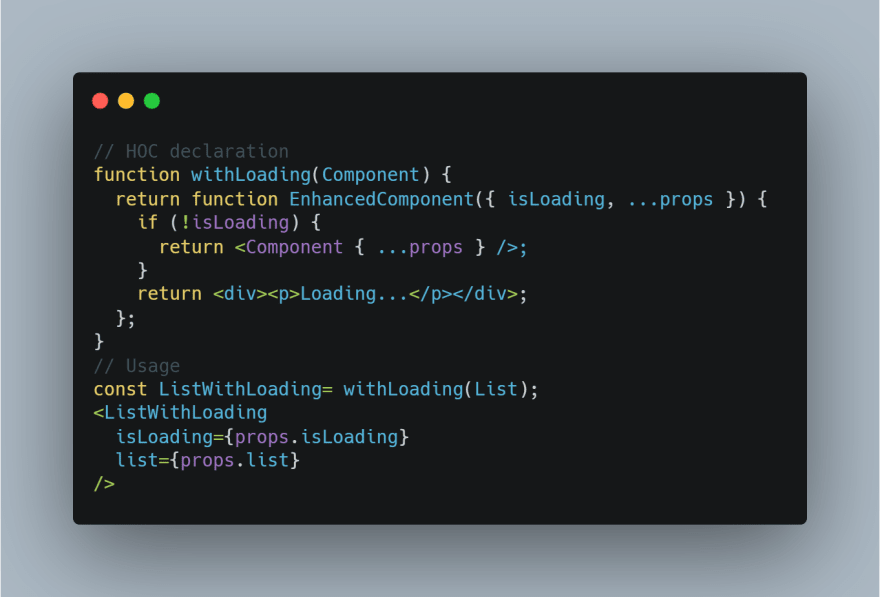 In the above example, the List component can focus on rendering the list. It doesn’t have to bother about a loading state. Ultimately, we could add more HOCs to shield away multiple conditional rendering edge cases.

Building and Deploying a React App

Everything we’ve learned so far has been in a development environment. We’ve been compiling, hot-reloading, and updating on the fly. For production, we’re going to want to have static files loading in and none of the source code. We can do this by making a build and deploying it.

Now, if you just want to compile all the React code and place it in the root of a directory somewhere, all you need to do is run the following line:

This will create a build folder that will contain your app. Put the contents of that folder anywhere, and you’re done!

Know more about Building and Deploy at React Build and Deployment

Thank You for giving this a read!!! Hopefully, this quick overview helps you ease into the world of React and provides you a bit of guidance for your initial journey. Happy Coding!

Create a tag cloud with HTML and CSS

Enough JavaScript to get you Started : #0 intro

Build a REST API with Node, Express and MongoDB