In this short article, I will show you how you can add a full-featured admin panel to your koa application.

This is a 7 minutes’ long article which can save you weeks of work.

After following this tutorial you will have an app with authentication, beautiful interface and the entire CRUD for your data. Further, you can adjust it to your specific needs.

Obviously we will use koa with some of its modules. But as an admin panel interface, we will use AdminBro, which got official koa support last week.

If you start from scratch, first initialize the repo and install koa:

Now install the following dependencies necessary to set up the admin panel:

Now we have to launch the admin interface. Create an index.js file and insert the following content:

Now, let’s run the app with node command. (you can also use nodemon)

And visit the http://localhost:3000/admin page. You should see something like this:

Ok, it’s pretty and it works, but it doesn’t do much. Let’s change that.

Fill it with your data

This is a part not exactly related to koa itself. AdminBro gives you the ability to manage data of all kinds. It supports the following adapters:

In this article, I will show you the simplest example of showing data from MongoDB with a mongoose adapter but first, make sure you have MongoDB running locally.

And change our index.js file.

This is an updated index.js file

And this is what creating new users looks like:

For the User model, AdminBro has generated an entire CRUD with validations.

The problem is with the password field which should be hashed whenever the user passes something. Fortunately, AdminBro comes with installable chunks of code which are called AdminBro Features. And guess what - there is a feature to the password hashing.

Install the feature first with argon2 which will be used to encrypt the password.

And pass the feature to AdminBro options like this

And this is basically it. Now you can create users and their passwords will be hashed automatically. Cool - right?

Before you move forward - create, at least, one user with known email and password. Let me suggest: admin@example.com:password

Since we have users in the database, with proper password hashing, let’s add an authentication mechanism.

In order to do that we will have to change buildRouter to buildAuthenticatedRouter and define the async authenticate method.

Before we do this we also have to set koa app.keys because authentication is using cookies.

most probably in the real world example you would like to take them from process.env

So we first look for an existing user and then we check her password with argon2. If everything is correct, we return the user object, which goes to the session. It can be then used inside the AdminBro.

And this is what we see after running the app again: 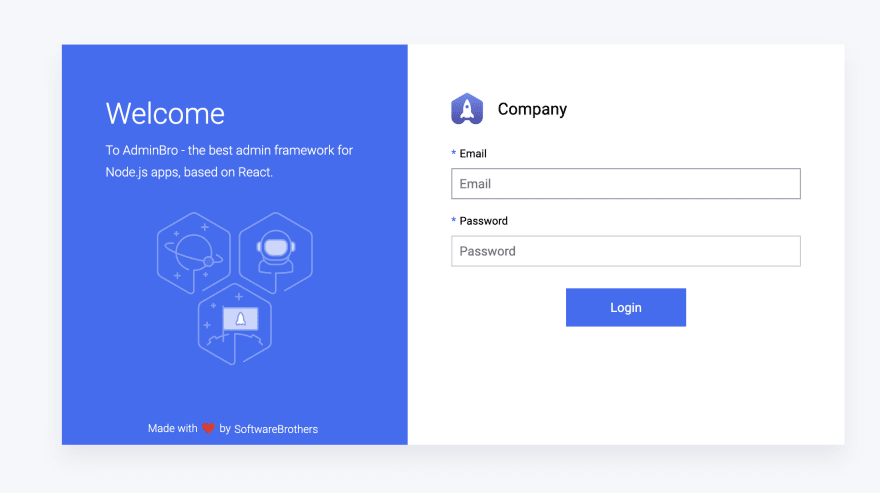 Fill it with the email and password you've just created (PS: I suggested admin@example.com:password :)) - and you are in.

Uff, we did it. We launched the entire application, authentication, password hashing and user management (CRUD) in a couple of minutes. Everything thanks to the amazing koa framework and a superb admin-bro admin panel.

From here you can do lots of things:

To check out all the available options - see adminbro.com documentation page - it is huge.

AdminBro is updated very often by developers from SoftwareBrothers, so make sure to star the repo to motivate them :). Do the same thing with koa.

I hope you liked this brief tutorial. Next time I would like to describe some more advanced AdminBro topics.

If you want you can download one file with the server code - you can do this here.

tadeuszkora
I am a javascript fullstack Developer
Useful Websites Every Web developer Should Know About.
#webdev #javascript #programming #productivity
What was your win this week?
#discuss #weeklyretro
An amazing note-taking system with Markdown and Git, Part 2
#productivity #programming #learning