I have worked in the web industry since 2005 as a front-end and back-end developer. I created my first websites in the '90s. Here is a story how I got tangled in the web and how I ended up to work as a web developer. There have been three major occurrences which have paved the way for my career.

Everything started when I was a teenager in the '90s. With a couple of friends we started to create websites to earn some pocket money. The main idea was to get lots of visitors to click ads and to get paid. At that time banner advertising payment models were mostly click-based so it was quite easy if your site managed to tempt visitors. Those were the good times for a black hat SEO strategies. For example you could use a huge keyword list at the bottom of the page with the same color as a body background. Also website link directories were still used a lot those days. There was a Finnish directory service which had an alphabetically sorted list of new sites on their frontpage. So it was quite easy to get to the top.

I also created some band fan sites and maintained sites for our QuakeWorld and Quake III Arena clan. I used a WYSIWYG editor like the Frontpage or the Dreamweaver to do development. But I always felt that creating code manually by hand is the proper way to do it and get better behaving code. It was mind blowing to get first own website publicly visible to the Internet. As a complete newbie it was just weird and fascinating to type an address and see something self-made in the web browser.

Layouts were mostly built with tables and images. The CSS was mainly used for a font colors and other similar very simple things.

I hosted my sites on my Internet connection provider's web hosting. Once the Internet provider called me because my site was generating too much traffic from the outside of the Finland. It was too expensive in those days. And I needed to temporarily take the site offline.

At some point we dreamed about our own company which makes websites but we never really started it. We had a website and we even got one real RFP but we never answered for that because we were unsure if we really could have delivered the solution.

Time goes by and for many years I didn't think much about websites but the seed was there.

Here are few websites from my prehistoric archives 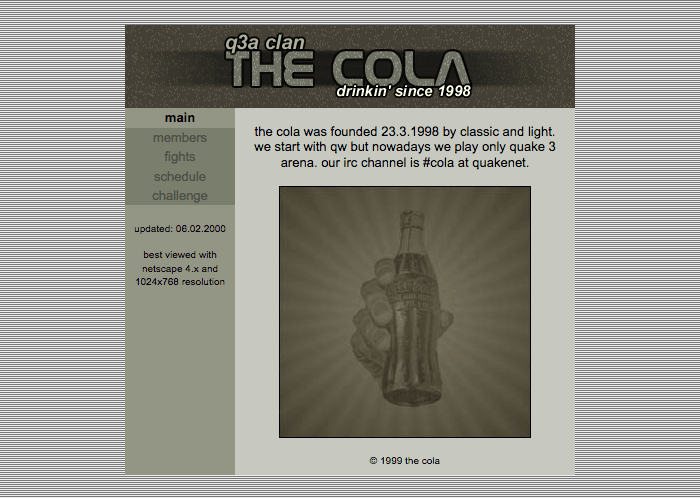 The website of our Quake 3 clan. Of course optimized for the Netscape and 1024x768 resolution :) 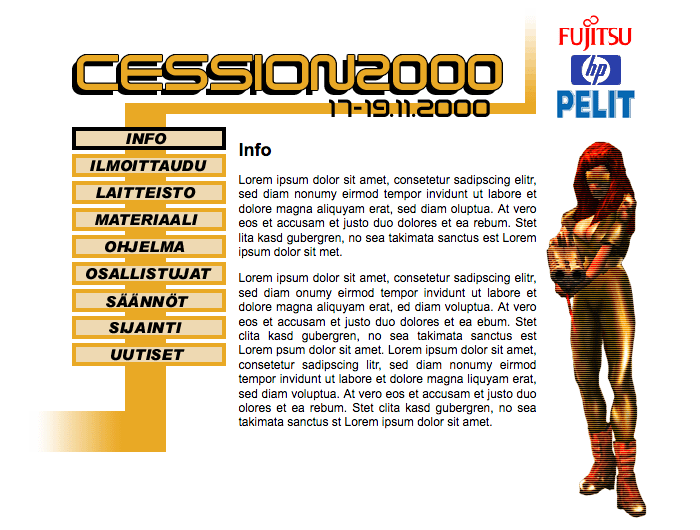 I am still proud of this hover effect which was on a welcome page of my Dalmatians website. Luckily this welcome page trend has been forgotten.

The rise of the Programmer

The second big thing for my career was at the vocational school where I studied Audio-Visual Communication. I applied initially for the Photography but eventually I got into Multimedia. That was probably really great decision career-wise. At that time it didn't feel so great because I dreamed of being a photographer or something cooler than a computer nerd. Though I have continued photographing as a hobby.

We studied how to create multimedia CD-ROMs, DVDs, Flash animations and other multimedia and web stuff which was hot in those days.

Then we had one course about PHP programming. The teacher was a guest star from external company and it was really awesome course. I already knew some HTML & CSS but I didn't know much about how to make sites dynamic and alive. After that course I started to really learn the programming and soon I noticed that anything could be possible.

As a diploma work I created a simple web shop written in PHP. In the written part I focused on a secure web programming and how did I make my web shop secure. I don't remember where that security aspect came from but it really felt important and natural. Another thing I have always found interesting is a performance optimization on a front end and back end.

After the vocational school I got my first real web development job as a Webmaster at motorbike store. I administrated and enhanced their e-commerce system and maintained other web sites.

Enhancing skills with the personal project

Third really big thing for my career and learning was a personal project called Kuvablogi.com which I developed with a couple of friends. Kuvablogi is Finnish and it means photo blog.

Kuvablogi.com was a Finnish photo sharing service and community where members were able to upload, organize and share their photos. Also there were blogging and geotagging features. There were 2 700 000 uploaded images and 34 000 registered members. Images were viewed and downloaded over 246 530 000 times when Kuvablogi.com was shutdown. There were about 50 000 unique visitors and 364 000 page views weekly.

When I was in the vocational school I had already implemented a simple image gallery for my own usage. I started to refine that for multi-user service. It was an another awesome moment when we noticed that first users had found Kuvablogi.com and registered an user account.

My responsibilities were front-end and back-end development. Kuvablogi.com was built on LAMP stack. The code base actually was a horror and eventually everything would have needed a major rewrite. This basically was our first bigger programming project and we didn't use any framework which could have guided our app structure or programming style. Proper PHP frameworks probably didn't exist when we started or we didn't know them. We also missed design skills so the UI and UX was a quite hodgepodge.

We used JS libraries which are retired nowadays like the Prototype and the script.aculo.us - the web 2.0 Javascript.

Hosting service was a constant issue. Bandwidth and storage needs were huge and server hosting was not so cheap those days. We had interesting approaches how we scaled service and distributed images to the less expensive hardware. We were able to host quite high traffic site with a modest hardware by optimizing our code base constantly. Even the code base was a mess the code was still performing very well because there were no complex layers and we could optimize everything really easily.

Eventually a rotten code base, ascending costs and other life activities took our free time and the Kuvablogi.com was left unmaintained. Also videos started to become more popular so it would have exponentially affect a storage capacity. Whole service was later shutdown completely because we thought it was best for the users to use other more active services.

Image from an online image album comparison of the Mikrobitti magazine (Finnish computer magazine). We looked quite good when comparing to bigger players :)

You can still find Kuvablogi.com from the Wayback Machine. Here is a latest frontpage on the May 2012. Here is an another view from an original layout on the October 2005.

I think I got my second job in a rising web company because of the Kuvablogi. I also learned so much from the every angle of the web development while developing and maintaining complex service like Kuvablogi.com. Also there are lots of things one can try more easily in personal projects than in customer work.

Nowadays I do front-end development at Ambientia. I am mostly working as a consultant at customer premises on remarkable projects which is again a great opportunity to learn more and to gain knowledge about different technology stacks.

Also my blog is an another step I have taken recently to grow as a professional web developer.

It has been a privilege to see how the web has evolved to a mature platform. Even though I am sometimes a bit jealous to younger web developers who can start with more matured standards and technology without a burden from the past. To name few things from the history I really don't miss the WAP pages, IE6 hacks, HTML newsletter layout tweaks for Lotus Notes, PHP4, table layouts and creating rounded buttons with images.

Once suspended, teroauralinna will not be able to comment or publish posts until their suspension is removed.

Once unsuspended, teroauralinna will be able to comment and publish posts again.

Once unpublished, all posts by teroauralinna will become hidden and only accessible to themselves.

If teroauralinna is not suspended, they can still re-publish their posts from their dashboard.

Once unpublished, this post will become invisible to the public and only accessible to Tero Auralinna.

Thanks for keeping DEV Community 👩‍💻👨‍💻 safe. Here is what you can do to flag teroauralinna:

Unflagging teroauralinna will restore default visibility to their posts.