In this article, let us discuss about Variables and Constants in JavaScript. This is the fifth part of my Beginner JavaScript Series on Dev.

Variables - A Complete picture of var, let and const 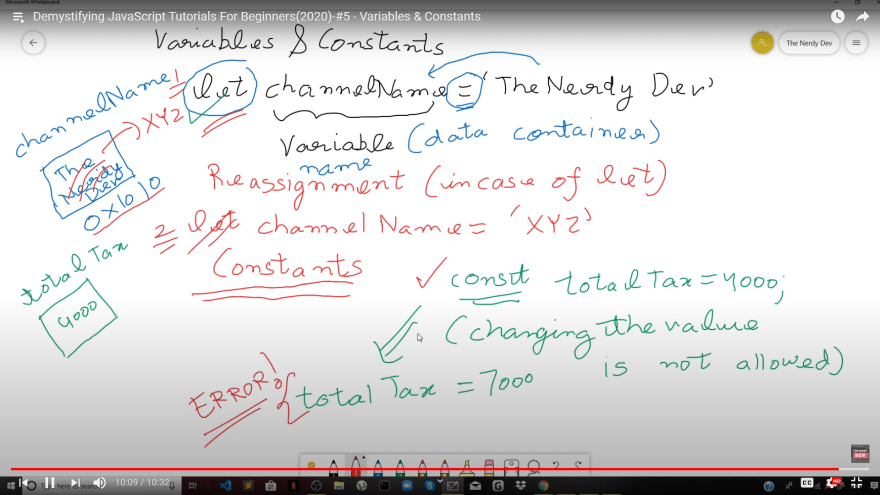 What is a variable ?

Variable means anything that can vary or change. JavaScript includes variables which hold the data value and it can be changed anytime. JavaScript uses reserved keyword var to declare a variable.

Remember, A variable must have a unique name.

Moving from var to let and const

A variable defined using a let statement is only known in the block it is defined in, from the moment it is defined onward.
Variables declared using the let keyword are block-scoped, which means that they are available only in the block in which they were declare and NOT outside.

At the top level (outside of the function )

Inside a function (but outside of a block)

In this case, let and var will have the same scope.

Variables declared using let keyword inside a block can't be accessed from outside that block.

Because of the temporal dead zone, variables declared using let can't be accessed before they are declared. Attempting to do so throws an error.

const is quite similar to let—it's block-scoped but we do have subtle differences between let and const as well. So let us discuss them first :

Note that it doesn't mean that the value is immutable. Its properties still can be changed.
So in essence this means that the variable will always have a reference to the same object or primitive value, because that reference can't change. Only the reference is immutable and not the value that is held by that variable.

Check my video on variables and constants to get more understanding on these:

So this is it for this one.

If you are looking to learn Web Development, I have curated a FREE course for you on my YouTube Channel, check the below article :

Spare 2 Hours ? If so, utilize them by creating these 10 JavaScript Projects in under 2 Hours

How I failed my first startup

Building a User Dashboard with Redwood

Code Zelda in JavaScript and Kaboom.js

The Nerdy Dev
I am a Full Stack Developer and occasionally a freelancer too. Building products is my profession, Creating content is my passion.
useRef Hook | useRef vs useState
#html #beginners #react #webdev
Learn the useReducer hook in 5 minutes with simple example [video]
#html #react #beginners #webdev
Beginner JavaScript - 14 - Creating and Inserting Elements to the DOM
#html #javascript #webdev #beginners