While perusing The Practical Dev for new posts, I came across a post that intrigued me: 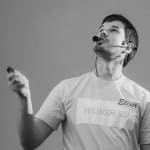 #productivity #dotfiles #commandline
Productivity for devs is something I’ve been meaning to write about. Now I have the impetus to do so.

I thought installing oh-my-szh and using aliases made me a badass. Unfortunately for me, that wasn’t the case.

This post is going to talk about productivity for developers, much like on the Syntax.fm show on the topic.

I find, first and foremost, that a great task manager is essential to remembering what you need to do. I use OmniFocus for my main task manager, on all my devices 1. OmniFocus may seem rigid in its attempt at GTD but it is pretty flexible: use what you want. 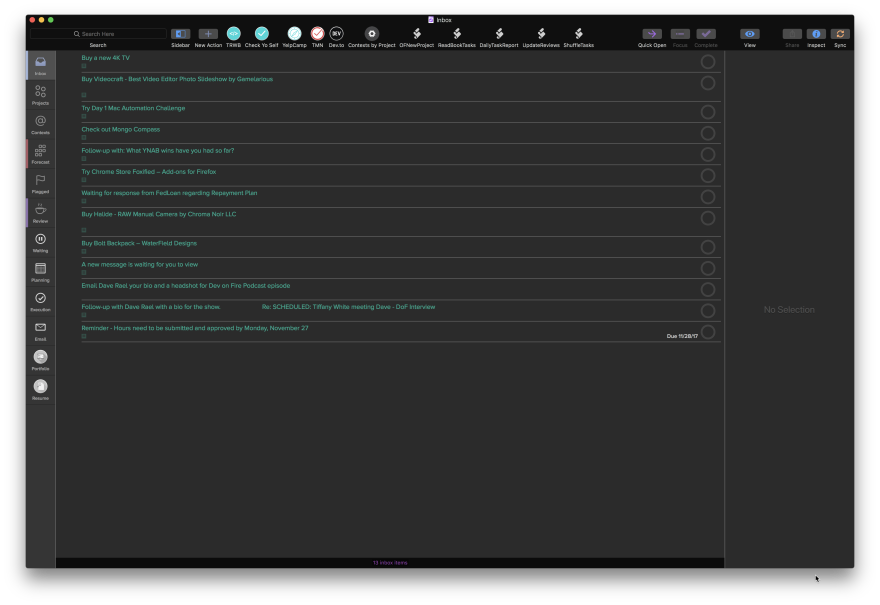 I use Trello to manage my projects and it does a fantastic job at that. Needing a high level and visual overview of what I need to get done, I reach for the Trello Mac app every time.

For my shell I use iTerm 2 which is in its 3rd iteration 2 and zsh shell.

Wes Bos has a great theme for all the things, a fork of the Sublime Text Cobalt2 theme and it is what I am using on iTerm as well as Visual Studio Code 3 which is faster than Atom though it lacks multiple projects in one window. 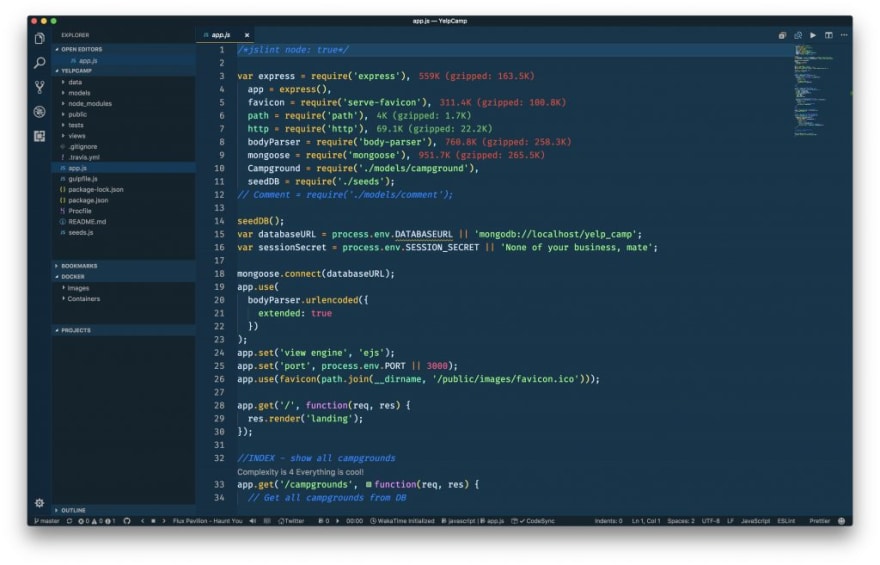 With the theme and the powerline fonts which show your git statuses and which directory you’re in, it makes for a great looking terminal. 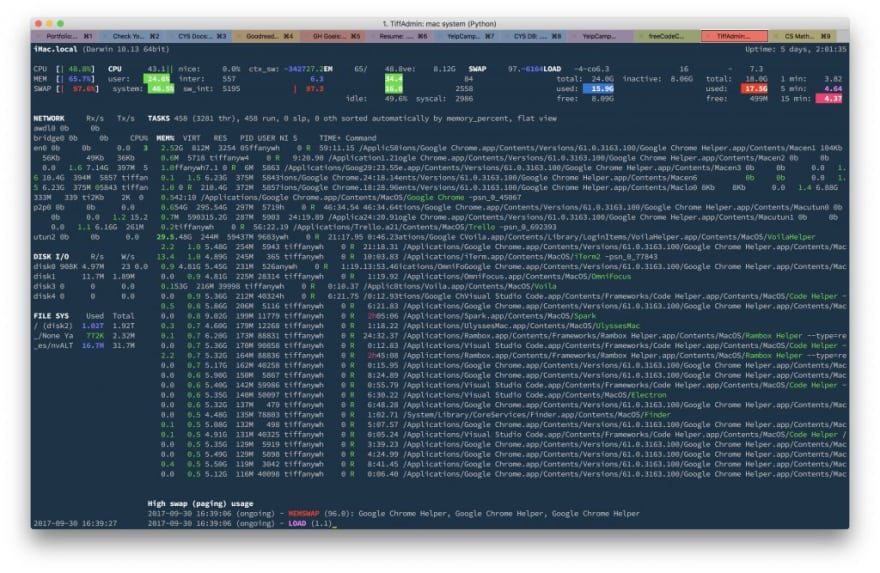 iTerm has the ability to have separate profiles for whatever you want. For instance, I have a Check Yo Self profile that I can switch to whenever I want to work on that particular app. 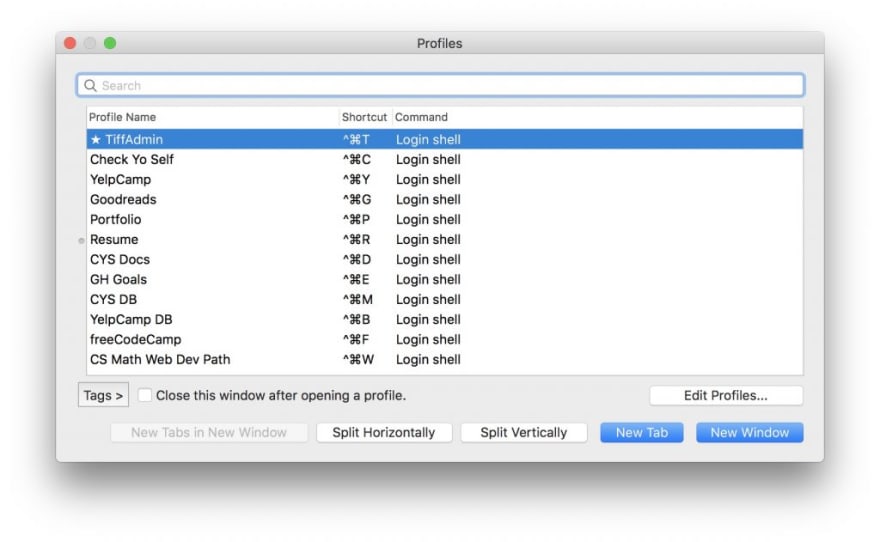 Knowing if you have a typo in an alias or command is crucial to not screwing everything up. One of the ways to tell what you’re typing is by using zsh-syntax-highlighting. You can customize the color of the highlights by looking at the highlighter docs.

Another cool command line utility is exa, which replaces ls with some nifty features like syntax highlighting and a ton of other commands. Just type exa and it will list the contents of your directory. You can get directory permissions, print each item on one line with the -1 flag, and much more. 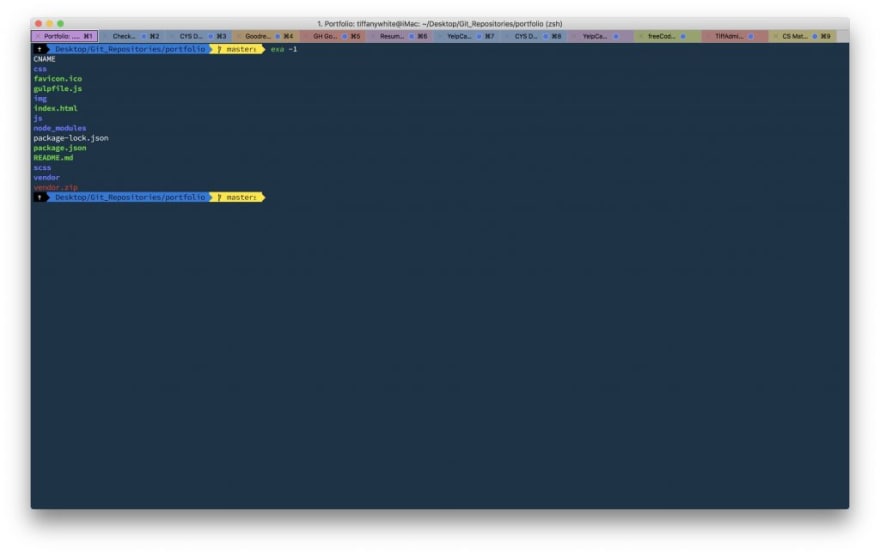 I use Alfred app for navigating pretty much everything. The workflows make it, where I can create gists out of files, search Stack Overflow, add Trello cards to different boards, and make OmniFocus tasks out of Chrome tabs, and much more.

I also use Wes Bos’s Cobalt2 Alfred theme for this.

Go F**king Work is a Chrome extension. It’s similar to Stay Focused but a lot harsher…as the name suggests. 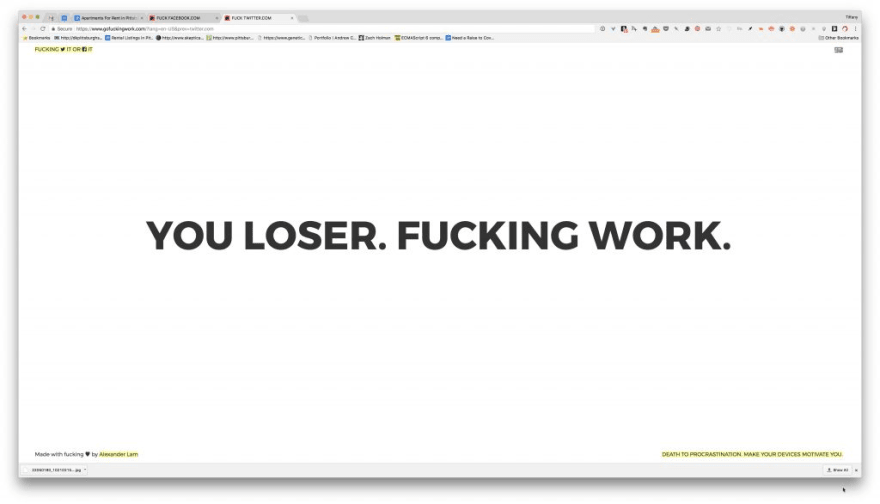 I swear like a sailor when I am around people I know and so I appreciate this extension for what it is and its customizability. There are alternatives of course, if sweary things aren’t your jam. 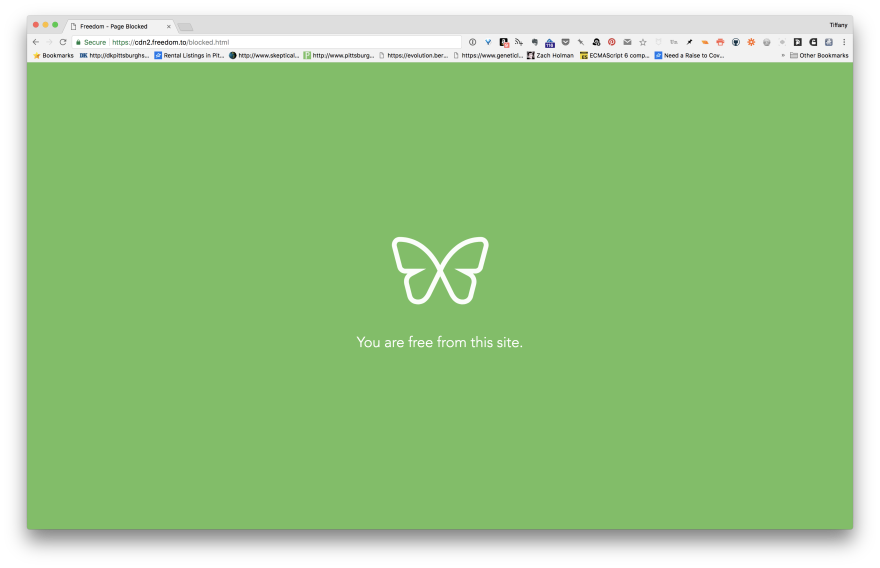 Freedom is a little Mac, iOS, and Windows utility that blocks distracting websites and apps.

I downloaded it for iOS a while ago and while it worked well, sometimes the VPN profile would still block access to apps like Facebook. It’s really a pseudo-block. It stops apps from refreshing but it will not stop you from seeing past updates. I uninstalled it as I am pretty good about phone access during work hours. It is mainly on my Mac, where I do my work, that is the issue.

The reason I downloaded it on my Mac was for the ability to block apps. I needed a way to stop opening my text editor and working on issues and features all night long, which isn’t healthy. I’ve blocked the apps I would use to do development, essentially quitting the app right as its launched so I never get to do anything when I am off the clock. I do this on the weekdays, as weekends I can work on side projects if I’d like.

Productivity is important and the tools you use should fit your working style. Just be sure while you're keeping on task, you're also staying healthy and taking time for self-care.

Once suspended, tiffany will not be able to comment or publish posts until their suspension is removed.

Once unsuspended, tiffany will be able to comment and publish posts again.

Once unpublished, all posts by tiffany will become hidden and only accessible to themselves.

If tiffany is not suspended, they can still re-publish their posts from their dashboard.

Once unpublished, this post will become invisible to the public and only accessible to Tiffany White.

Thanks for keeping DEV Community 👩‍💻👨‍💻 safe. Here is what you can do to flag tiffany:

Unflagging tiffany will restore default visibility to their posts.