In the last post, I described the order of formation and destruction of the Execution stack. Now, let's understand it with a code example to make it more clear

Here's the code sample that I will be using here 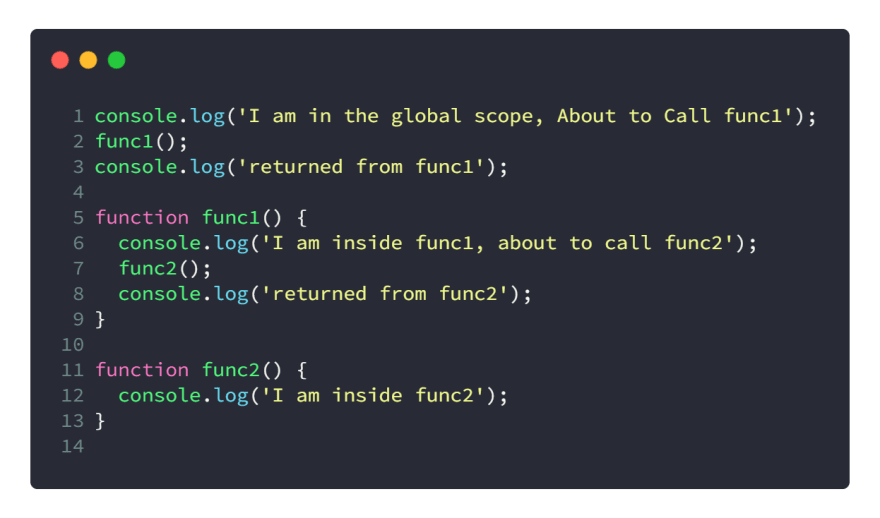 The above code produces the following result in the console.

Now, let's understand what is happening behind the scenes by breaking down the above code into simple chunks.

This code is in the global scope. Diagramatically,

When the program's execution is started, first, line 1 is logged to the console. Then on line 2, a function call named func1( ) is encountered. The execution flow moves inside func1 without going to line 3. Since a function call is encountered, a new execution context associated with func1 is formed and is placed on top of the global context. Diagrammatically;

This new execution context is containing only the code for func1, i.e. lines 6,7 and 8.

First, line 6 is logged onto the console. Then on line 7, a new function call to func2( ) is encountered. The flow is now moved inside func2 without executing line 8. As a result, another execution context associated with func2 is formed and is placed on top of the func1's execution context. Diagrammatically;

This new execution context is containing only the code for func2. i.e.

In the global scope, the flow returns to line 3, executes it, and logs line 3 on to the console.

In the next post, I will be explaining the execution context in detail. How it is formed and what does it contain.

Till then, you may leave your queries and suggestions in the comments below.

The series is inspired by The Complete Javascript Course 2020 : Build Real Projects by Jonas Schmedtmann