Discussion was locked because I moved away from DEV to blog on my personal website. If you want to chat about the content of any article, hit me up in Mastodon.

While a lot of programming languages that have a "nullish" type (null, nil, etc.) debate about avoiding it, JavaScript is the only popular one that has two, you read that right, two nullish types. One of the most common recommendations is to stick to using only one, and my recommendation is to only use undefined and avoid null. In this article, we will go over the reasons you might also want to avoid null in JavaScript and TypeScript.

Why is so common to avoid nullish values?

The creator of null pointers (Tony Hoare) is known for calling his own creation a "billion-dollar mistake":

I call it my billion-dollar mistake (...) My goal was to ensure that all use of references should be absolutely safe, with checking performed automatically by the compiler. But I couldn't resist the temptation to put in a null reference, simply because it was so easy to implement. This has led to innumerable errors, vulnerabilities, and system crashes, which have probably caused a billion dollars of pain and damage in the last forty years.

When we use nullish values, what we want to express is that something is "not there", a "no-value". Generally, in typed languages, we express those as "optional values", because they can either be set or be nullish.

The direct implication of this is that we need to test every "optional value" for its type and also for the nullish value it can take.

Now, imagine how bad is it for a language to have two nullish values. We now need to test for not 2 different types, but 3. This affects negatively maintenance, readability, and overall code quality. Because of this is that the most common recommendation is to avoid nullish as much as possible, and in JavaScript, try to stick to using only one. In the following sections, we will go over some reasons why I (and many other developers) prefer undefined over null.

The nullish that the language uses

As Douglas Crockford (the father of JSON) put it in one of his talks, JavaScript itself uses undefined all the time, so let's use the one the language uses:

To use null on all those scenarios, we need to explicitly set the values to null, which will look like this: 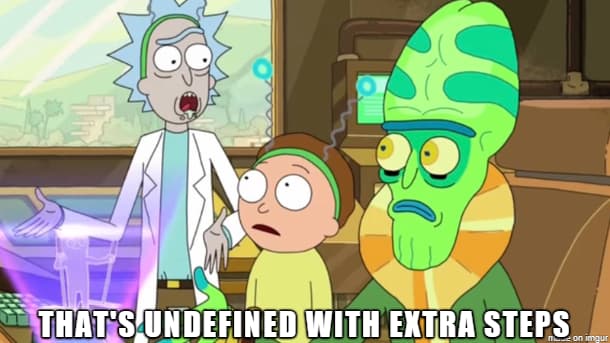 What if I want to define a nullish value intentionally?

In that case, just assign undefined to it:

That nasty bug with the type of null

We all know at this point about the bug with typeof null, that bug doesn't apply to undefined which works as expected:

Why would we use a bugged value intentionally?

API response sizes are reduced drastically if we rely on undefined instead of null. Here's a response example using null:

The case with Array

Array is a special case, because when we create a new array of a given size, the items inside said array are actually empty, not undefined. This empty means that if you check for their value, it will give you undefined, but they aren't taking any space in memory (performance reasons), so if you try to loop over it, it will give you nothing:

The arguments in favor of null

When I say that you don't need null, folks that use it a lot (generally coming from other languages that have null as the only nullish value) get pretty mad about such claims. The most common response I get is:

null is for intentional missing values, and undefined should be used when the values were never set in the first place.

The first thing I think with responses like that is: Why would you ever need to make that distinction? Both are "nullish", and you don't need to differentiate between "intentionally missing" and "unintentionally missing". One common usage of null is to do stuff like this:

But you can just omit middleName when the user doesn't have one:

And you can set middleName to an empty string if the user intentionally left that blank, if you really need to know that for some reason:

And the TypeScript representation would be something like this:

Why would we spend memory with a null value there, or bits with a JSON coming from the back-end, when we can just omit what is not there?

But the API is responding with null (maybe written in Java), so I have to use null all over my app as well.

My answer to that is: Use an API wrapper. Instead of "spreading" null all over your codebase, update your surface of contact with the API so nulls are removed, and if you have any contact with the folks making the API, voice your concern of making API responses smaller by getting rid of null values. You should try to avoid ending up over-engineering/over-complicating your app just to deal with null when you can just avoid it altogether.

You can use undefined as well.

You have to type 5 more characters when you write undefined explicitly in your code.

Generally, you will rely on it implicitly (omitting the value), but even if we had to type it every time, is worth it compared to all the downsides of null.

There are languages out there that don't have nullish values, and instead rely on Maybe, which is a type that means "we might get a certain type or nothing". We can do a simple implementation of that in TypeScript like this:

So we might get whatever type we are expecting or undefined. We can just use ? as well when it's a property or argument:

To deal with our "Maybes" we can use operators such as nullish coalescing (??) and optional chaining (?.), so...

If you're convinced that null is not a good nullish value, you can avoid it from now on using this great ESLint plugin, and just add this to your linting rules:

My personal opinion about null in JavaScript is "anything written with null can be written with undefined instead", but your mileage might vary, so as usual I close this article with a few open questions: Do you NEED to use null? Don't you have a way of resolving that issue without it?

Thanks for reading this, and special thanks to the 3100+ followers that motivate me to keep doing this series! Remember that if you don't agree with something said here, you can just leave a comment and we can discuss it further.

See you in the next post of this series!

This series is called "You don't need ...", emphasis on need, meaning that you would be fine without the thing that the post covers. This series explores alternatives, it doesn't impose them, so consider that before glancing over the post and ranting on the comment section. Keep it respectful.

The discussion has been locked. New comments can't be added.