Recently, Stack Overflow published the results of the 2020 survey on the programming area, using the data provided by 65,000 developers from all around the world, and you must wonder why such an unknown language was at the top, surpassing even Typescript, Kotlin and Python, which are well loved by their audience and also very famous.

To understand why 86.1% of developers using Rust love the language, we first need to understand its origin:

Rust started as a personal project by Mozilla employee Graydon Hoare in 2006, the project was sponsored by the company in 2009 and had its first version (1.0) in 2010.
“The language was designed to help developers create fast and secure applications that want to take full advantage of the powerful features of modern multi-core processors. It prevents segmentation faults and ensures thread safety, all through an easy-to-learn syntax.
In addition, Rust offers zero-cost abstractions, semantic changes, guaranteed memory safety, threads without race conditions, trait-based generics, pattern matching, type inference, and efficient binding to C, with the smallest size at runtime.”

As many tech companies say, it is very difficult to write secure code for critical things like engines and kernels, which are usually written in C/C++ for controlling low-level concerns and performance. Problems such as memory leaks and exceptions due to pointer problems or even security problems such as improper access to memory addresses often occur.
Rust fills these gaps, offering control and security for the application without sacrificing performance, and it was exactly for this reason that Microsoft decided to adopt the language to use in its products and services. (See article).
Not only did Microsoft realize that investing in this new technology would be a good idea, but Linus Torvalds also discusses including Rust in some Linux modules (Read this article).

Discord itself uses Rust in production to solve problems with frequent CPU usage spikes when triggering the Garbage Collector (Read this article).

Recently, several big techs like Google, Microsoft, Mozilla and Amazon jointly launched a non-profit organization to help the language maintain itself by giving full support to the maintainers who lead and develop the project.
Here at Vaultree we use Rust in our product and services, as we need to deliver data with reliability and agility to our customers, as we are in a business line where any error or inaccuracy can be costly, the adoption of Rust was a great fit for us. 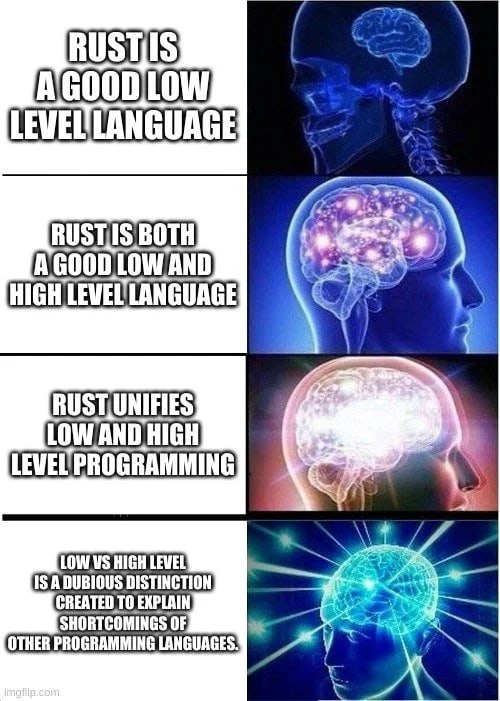 So, we talked a lot about how Rust was a fit for us, but, what are some of its main features?
Rust contains some features that make it different from languages ​​similar to it, such as C or C++. Check out the main ones below!

Many programming languages ​​use a garbage collector, also called Garbage Collector. It is a mechanism that frees the memory allocated by variables that are no longer in use. Rust handles much of the memory management during the build process. That way, you don't need an extra component to perform this activity.

This feature guarantees more speed to the application, as it does not need a runtime along with the executable object. In this way, there is a performance gain. Therefore, one of the applications in Rust is for the development of libraries that can be accessed by different types of languages ​​through interfaces, including web applications.

The Rust compiler is extremely efficient. It is capable of detecting different programming errors that may interfere with the application's operation. In addition, Rust has a runtime memory management system. This means that whenever a variable is no longer used by the application, it is automatically eliminated.

This feature allows faster access to memory during application execution. In addition, it guarantees that there is no invalid memory state, that is, there are no null pointers or alone, which would cause memory segmentation faults.

Rust has a super smart compiler. Therefore, it can identify programming errors that may go unnoticed in other languages. It also has extensive documentation, rich in details, explanations and examples on how to use the language.

It also offers intelligent support and compilation tools, which can be integrated into many available code editors. All these features help to increase the productivity of programmers.

See how Rust language is an excellent alternative for applications that need good memory and speed management? In addition, it is a versatile tool, as it can be used both for the development of low-level systems and web applications.

At Vaultree we are building an encrypted future. We love sharing valuable information and trends to help you keep your data safe. Sign up to stay in the loop and discuss the hottest trends in cybersecurity with a team of experts.

How did you land your first developer job as a self-taught programmer?

Once suspended, vaultree will not be able to comment or publish posts until their suspension is removed.

Once unsuspended, vaultree will be able to comment and publish posts again.

Once unpublished, all posts by vaultree will become hidden and only accessible to themselves.

If vaultree is not suspended, they can still re-publish their posts from their dashboard.

Once unpublished, this post will become invisible to the public and only accessible to Pedro Aravena.

Thanks for keeping DEV Community safe. Here is what you can do to flag vaultree:

Unflagging vaultree will restore default visibility to their posts.