We as humans are prone to fall for exaggerated versions of reality. Ready Player One is a film that portrays this very well with a few extenuating circumstances added in. We have gotten good at pushing our buttons. Food is the best example to use for this. We crave all the sugary and salty foods instead of healthy foods. Most people will not stick to any keto diets or vegetarian diets because some of the foods in those diets lack the salty sweetness of the foods that they were previously eating. We will also choose to overeat because those foods are available. Don't need the extra cookie, but hey it's here so why not. This behavior is counter to our original wiring of hunting for our survival food. Foods that are high in dynamic contrast keep the experience interesting which encourages us to eat more.

To increase the odds that a behavior will occur we need to make it attractive. Now we learn how to make them Irresistible. It is not possible to turn every single habit into a super-powerful stimulus, but we can make any of our habits more enticing. To do so, we have to understand what a craving is and how it works. The first stop is a biological signature that all habits share => The Dopamine Spike. 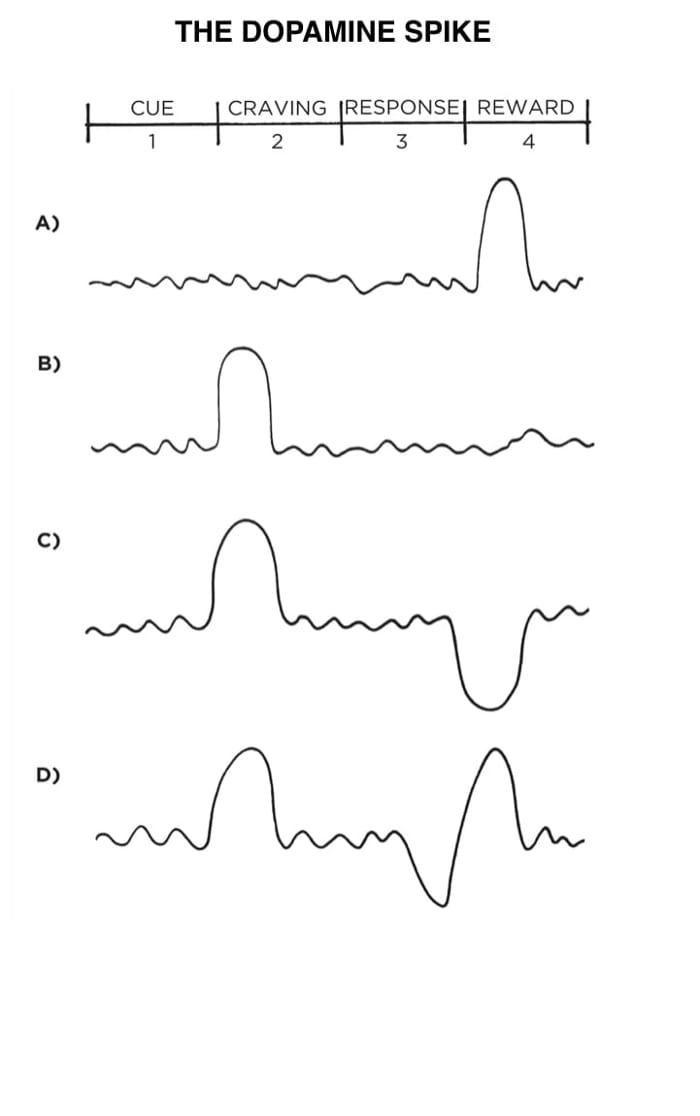 To put Dopamine into perspective of how vital it is, in 1954 neuroscientists James Olds and Peter Milner implanted electrodes into the brains of rats. Using those electrodes, there were able to block the release of dopamine to the brain. The tested rats lost all will to live. Without Dopamine you will still enjoy things, you just won't desire to do them or want whatever it is.

Our habits are a dopamine-driven feedback loop. Every behavior that is highly habit-forming ie:

these habits are all associated with high levels of dopamine. Dopamine plays a very central role in many of our neurological processes,

For habits, the big thing to know is, Dopamine is released not only when you experience pleasure, but also when you anticipate it. The anticipation of getting a reward, not actually getting the reward that gets us to take action. These insights show the importance of the 2nd Law of Behavior Change. We make our habits attractive because the anticipation of the reward motivates us to act in the first place.

Temptation bundling works by linking an action you want to do, with an action that you need to do. You are more likely to find a behavior attractive if you get to do one of your favorite things at the same time. I need to finish painting the living room, I want to listen to the new Nickelback album (kidding...nobody listens to Nickelback). So you bundle that together and only listen to the new album while you are painting the living room.

Temptation bundling is one easy way to apply a psychological theory known as Premack's Principle this principle states:

After I [current habit], I will [habit I need].

Eventually, with enough iterations you will look forward to the new habit you need because you will get to do the habit that you want.

So far this has been a very internal and solo adventure, so in the next article, we will go over the role that your family and friends can play to help you along the route of forming your new habits. Thanks again to all of you that read my articles, please don't hesitate to comment or connect to me through social media, I am @j3ffjessie on Twitter.

I made a 'new tab' browser extension/theme

Migrating from NPM to Yarn

Should I learn Angular or React?