This hackathon has been very interesting to me. The most of encountered this tech for the first time and it didn't stop us from creating astonishing 100+ projects. We developers can be really creative :)

For me, it usually takes more time coming up with the idea rather than building it. This time was different. Seeing all these software projects and examples from fellow DEV members was cool but I knew something was missing - TESTING. I've Googled a bit, and to my surprise, for the first time in my life, Google had no results about existing Web Monetization testing libraries.

I know, we are early adopters, but it's scary when Google fails on you 😨

Tessy is a declarative testing library and provides bindings for 3 most popular e2e testing frameworks:

Of course, Tessy is not limited to only these 3 frameworks, you can use with/without any library - your choice. I've chosen to provide bindings for these frameworks because they are the most popular & most importantly - the most used ones. If you have other framework in mind, feel free to submit a PR. Bindings in Tessy are really straight forward.

😎 Talk is cheap. Show me the code.

That's what I wanted to hear. Let's go over few examples to see how Tessy is actually useful.

In these examples, I'll be using Cypress, but you can take a look at README and see how you could do the same with Selenium or Puppeteer.

Our first test is going to introduce you to Tessy. 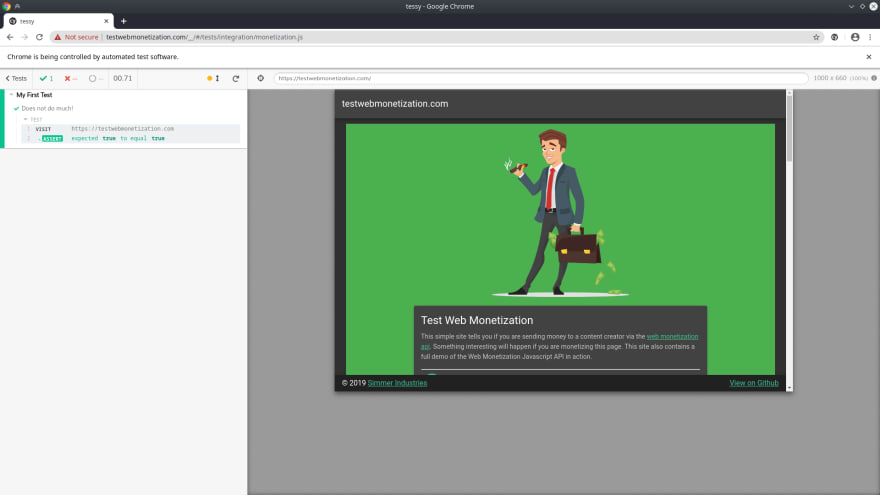 Alright, how was that? Pretty simple, right? Now, let's see a real world example where you would need Tessy.

I've choosen Robert Soriano's funny example, but it illustrates the point. He created a simple website that shows you AD (funny gif in this case) if you are not using Web Monetization. If you are using it, then you will be presented with a counter. Our job as a tester is to verify that AD is not displayed to the users that are using Web Monetization like Coil and actually paying for the content. It would be a terrible user experience. Let's make sure it doesn't ever happen with Tessy!

Once you've setup the project, add test script to package.json like this:

Now, run this command to launch Cypress for the first time. After the Cypress App loads, you can close it and you'll see a new folder "cypress" in your project. This where your Cypress tests and plugins reside.

Create index.spec.js inside of a cypress/integration folder. This is the folder where your test files are stored. Copy this code in the index.spec.js:

The Cypress app will open and you will see a list of specs you would like to run. The last one is ours. 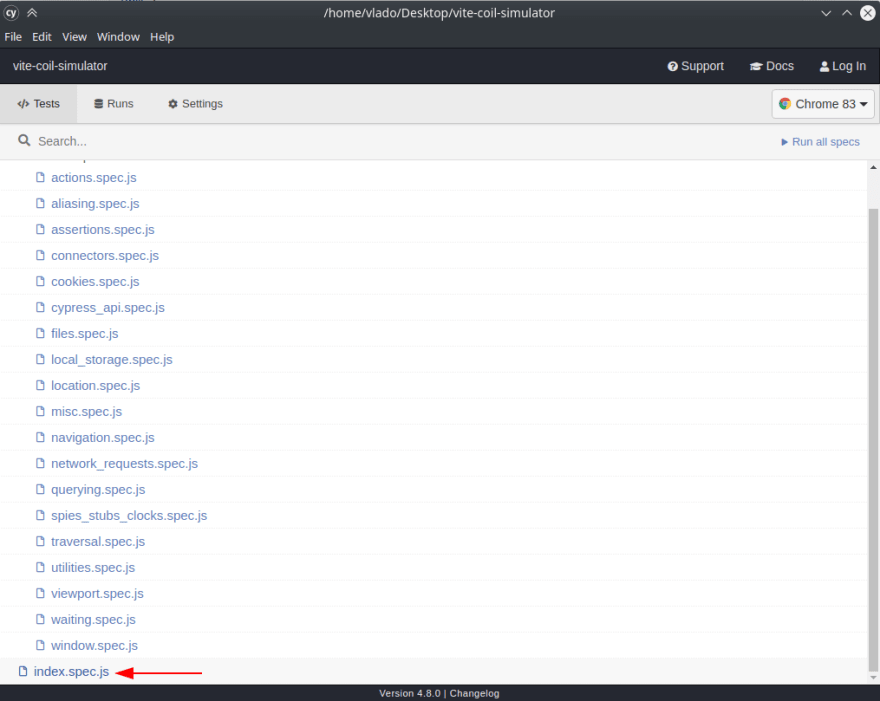 Select it and you'll see that our test is passing 🟢 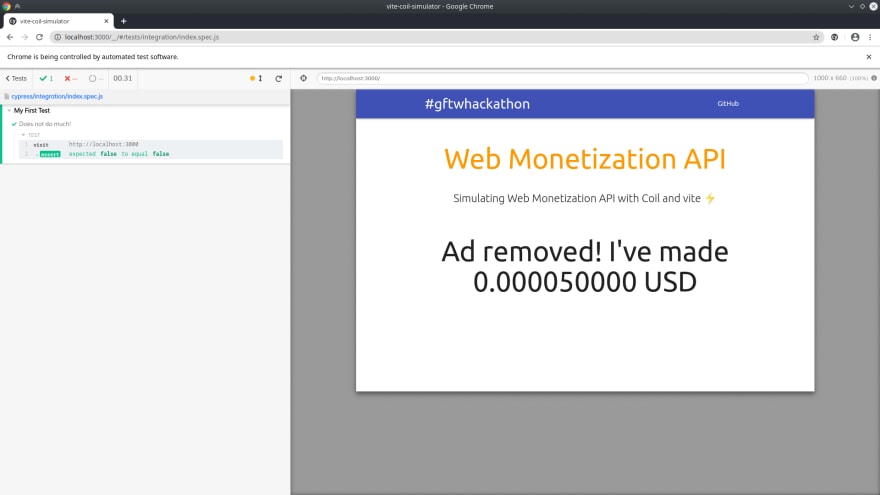 As a tester, your job is done here. Well done 🎉

These were some basic examples but with Tessy you are in charge of your Web Monetized environment. Maybe you have a music platform and you want to make sure that once the user stops streaming, music stops as well, or you need hide that special ebook that is only available for users who appreciate your work, or maybe you want to react on monetizationpending state and inform the user of the current status? No problem, with Tessy anything is testable. Just head over to the docs.

🤔 How did you build that?

I've built it with vanilla JS. No dependecies whatsoever, except the development ones. Web Monetization guide nailed the explanation so I didn't have any problems understanding how this works. Documentation matters a lot!

Category: Foundational Technology
Thumbnail image provided by Freepik ❤️
The project is hosted on Github and licensed under MIT license.

I would like to thank DEV for hosting this awesome hackathon. I've really learned a lot and I am looking forward to using Web Monetization on my personal site and encouraging my friends to spread the word so we can make this a browser standard!

Let me know how was your #GFTW and your opinion on Tessy?

Thank you for reading and bye till the next time!

Add A Little Whimsy to Your Forms

5 Tips for Getting Over Your Fear of Math