TCP is a reliable connection-based protocol that is used by many of the application layer protocols we use every day. HTTP, HTTPS, and FTP are only a few examples from the list. This is the first article in a series that illustrates the basics of the TCP protocol and its analysis using Wireshark. Basic knowledge of how to use Wireshark is needed.

There are many transport layer protocols, from which TCP and UDP are the most popular. TCP is an acronym for Transmission Control Protocol and it has the following characteristics

The Berkeley sockets API is the most common API used for TCP and you will almost find it in all major operating systems.

The TCP is a connection between two hosts

The TCP defines a 3-way handshake mechanism to initiate the connection. 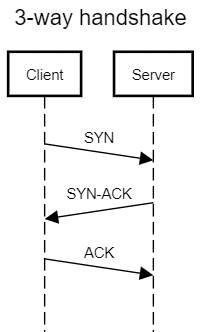 And this is how the handshake is captured by wireshark

During this handshake, the client and the server also declare their capabilities for each other to agree on the common connection parameters to be used between them. Also during the handshake, each side informs the other one what is its initial sequence number (ISN).

The expert view of Wireshark for each TCP packet will display packet parameters, flags and options.

The generic TCP parameters on each packet are:

TCP options are used to add capabilities that were not part of the original TCP specifications. We will not discuss options now as they will be discussed later.

The client connection to the server can be refused and the most common causes are that the server is not listening on the port the client is trying to connect to or if there is some firewall rule that prevents the connection. In this case, the server may respond with a reset instead of SYN and ACK

To close the TCP connection, the closing side should send a FIN packet which also contains an ACK for the last data this side received, then the other side should reply with an ACK that it received the FIN and notify the application that the other side is closing the connection. Usually the application will close the connection too which leads to another FIN to be sent to the side initiate the close and wait for an ACK to know that connection is now closed completely from both sides.

And this is how the connection close is captured in wireshark

The side that initialized the connection closure will not be able to use the same IP and local port again to connect to the same server IP and port for a certain period -- controlled by the operating system. It should wait for some timeout counter set by it's OS to timeout before being able to do so.

There is also a half closed mode, in which only one side closes the connection to indicate that it will not transmit any more, but it can normally receive data from the other side till it close the connection too.

In this tutorial we discussed the basics of TCP, and how to open and close the connection. In the next tutorial in this series we will talk about actual data transfer over the TCP protocol.

This week in Flutter #21