There's this phenomenon in psychology called the Frequency Illusion - it posits that once you notice and understand a single instance of something, you're going to start seeing it everywhere and believe that it's super common.

I've been having some serious Frequency Illusion this month around one-stop-shop API + frontend frameworks for React. It seems like every week there's a new toolset coming to market that aims to be the Laravel or Rails or Django for JS-based web apps.

Let's do a quick dive into the ones I've run into recently and the immediate pros and cons each one brings to the table. Are any production ready? Do any actually make your developer experience better?

What They All Do

All of these tools provide you with a few key things you'll need to set up almost any JAMStack web app: 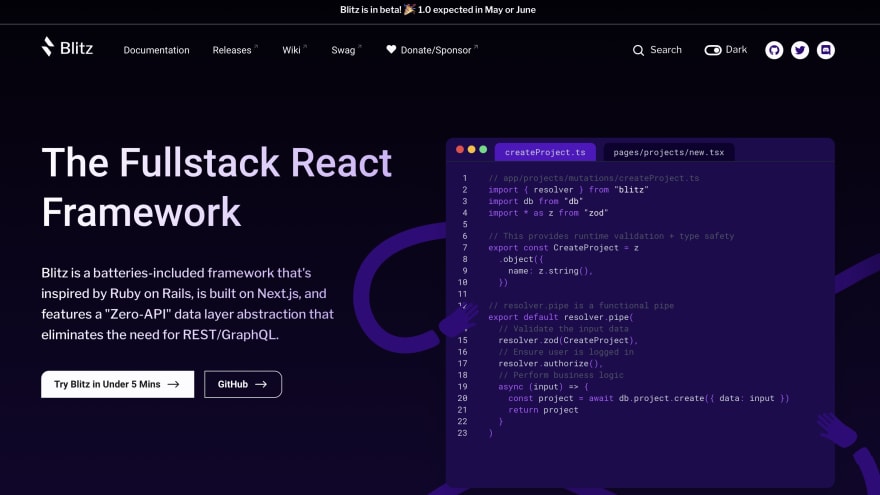 Blitz is a lightweight collection of generators that turn out a Next.js-style monolithic JAM app. Blitz touts its community (which it advertises as strongly welcoming to LGBTQ+ people, women, and minorities) as one of its key features, but I will only be talking about the tooling and framework itself here.

Blitz is built on Next.js and, presumably, other open-source tooling. However, it obscures all of its underlying technology other than Prisma to the point that it may as well be a new framework unto itself.

Blitz kindly did my work here and listed their trade-offs themselves. 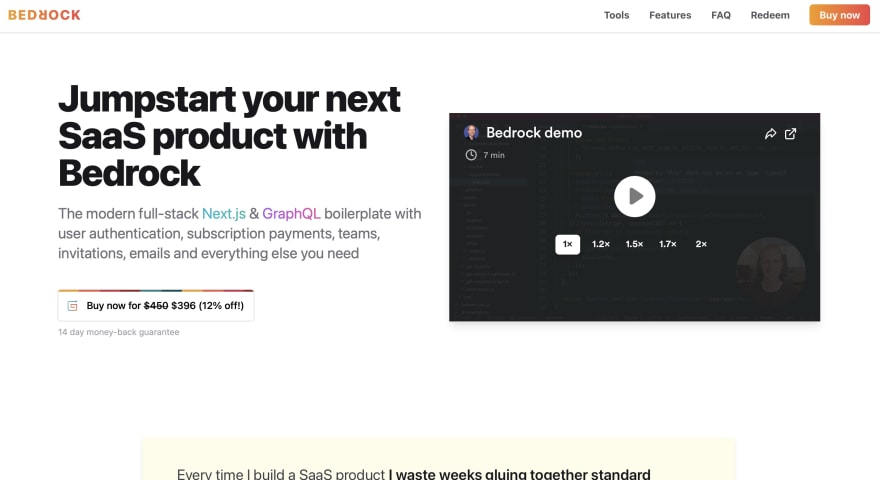 Bedrock is a private, for-profit getting-started kit by Max Stoiber.

Bedrock is based on Next.js, Prisma, and written in Typescript. It uses GraphQL for its API and Passport.js for authentication. It also comes with Postmark and Stripe integration out of the box for sending email and taking payments. 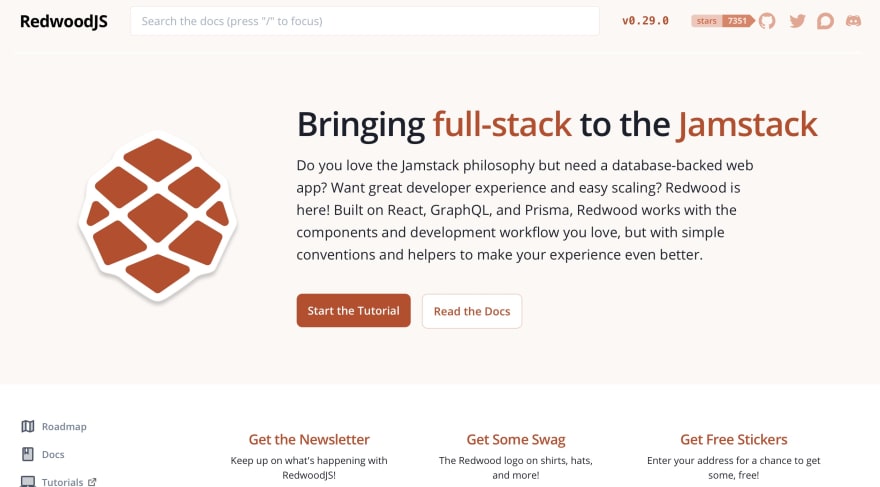 RedwoodJS comes with quite a pedigree, being the latest project from Tom Preston-Warner, a co-founder of Github and creator of Gravatar and Jekyll.

Redwood uses Storybook to organize its React components on the frontend. In the API, it uses Apollo to serve GraphQL. 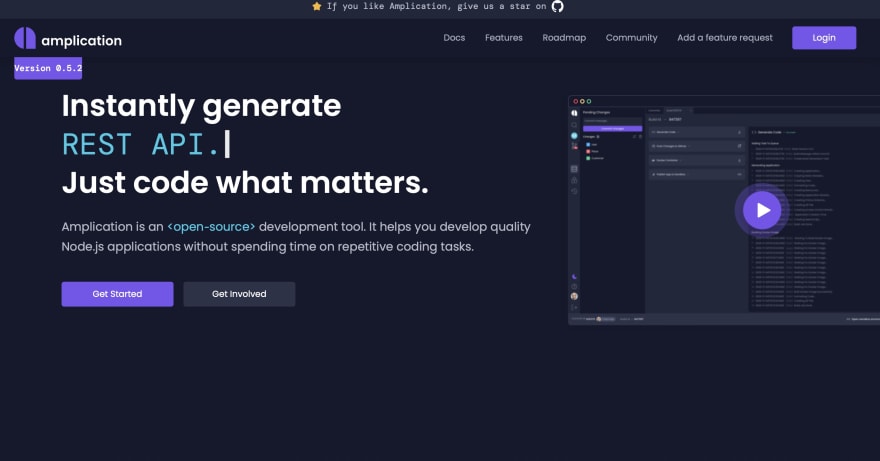 Amplication is a bit of an odd-one-out on this list. Whereas the other frameworks in this comparison are meant to be the foundation for your web app, Amplication is a webapp which generates web apps. The resulting apps can be downloaded freely and are almost entirely independent of Amplication.

Generated apps are basically a who's-who of hot JAMStack tools - they use NestJS, Prisma, Apollo, Express, Passport, and everything is written in Typescript and containerized with Docker. Generated apps also include both a GraphQL and REST API (documented in Swagger) to access your data and a separate Admin frontend built on Amplication's own toolkit.

Having spent the weekend walking through these four libraries' "Getting Started" guides, what are my takeaways?

First off, sadly a lot of these frameworks are clearly not production-ready, even for a side project. The ideas that Amplication, Blitz, and Redwood are introducing - powerful code generation to rapidly build out an API and its boilerplate - are sorely needed in the React/JAMStack landscape. But Blitz and Amplication especially felt too unstable for me to use in anything other than an internal project. Redwood is closer, but the clear winner is Bedrock, which is the only one touting itself as honestly production ready.

Next let's talk about vendor lock-in. Vendor Lock-in is why I never use Create React App anymore (and you shouldn't either). As a framework ages, keeping up to date with all its dependencies becomes harder and harder and if you depend on that framework you wind up using old, buggy, or insecure code. This, I fear, is the danger with Blitz and Redwood. Their vendor lock-in is so tight that you are really binding your app's upgrade lifecycle to those teams' schedules. The clear winners here are Amplication and Bedrock, since these two give you direct access to the dependencies, freeing you up to manage your own upgrade cycle.

Finally, what is the value-add of these frameworks for you? The elephant in the room here is Bedrock's $400 price tag. Is it worth that? It is built on free tools put together in a fairly obvious way - you could replicate it given enough time. But, the glue-code that Max wrote to stick them together, code that has already been validated both during development and in production, is valuable. So, is the time the kit saves you worth $400? Similarly, is the time-saving code generation of Redwood and Blitz worth the cost of vendor lock-in?

For me personally, the clear winner of this experiment remains doing it yourself. For my process, none of these tools brings enough to the table for me to switch over to them. But that is a personal choice based in part on the fact that I need to keep learning things to write in this blog...

However, if I needed a framework to quickly prototype a JAMStack application, I would have to give the crown to RedwoodJS. It's free, open source, and it seems to strike the right balance of being almost production-ready, easy to use, and actually helpful.

The exciting thing about this contest, though, is that it is still being run and could change any day. Any of these libraries could pull off the same miracle Prisma did with their jump from version 1 to 2 and leap from being a niche player to the trendiest force in the field. Plus I'm sure there are more of these tools out there that I haven't even heard about - maybe that were even released as I wrote this post. If you know of one please drop it in the comments so I can check it out 👇

Zack Sheppard
I used to be an actor, but programming jobs are easier to come by. I've been doing this now for 11 years. I focus on pixels and experience, especially on iOS and the web.
I Promise you won't have to await long to understand async in Javascript
#javascript #webdev #beginners #node
Learning Two Frameworks by Bridging Them Together (Redwood + Clerk)
#javascript #webdev #opensource #showdev
Speedy and Stylish - How to style NextJS with Bootstrap 5, SASS, and PurgeCSS
#webdev #tutorial #css #nextjs

Once suspended, zackdotcomputer will not be able to comment or publish posts until their suspension is removed.

Once unsuspended, zackdotcomputer will be able to comment and publish posts again.

Once unpublished, all posts by zackdotcomputer will become hidden and only accessible to themselves.

If zackdotcomputer is not suspended, they can still re-publish their posts from their dashboard.