If you've read my last blog post, Test-Driven Development, then you know that lately, I've been digging deeper into how to write tests. This past week I was working on a technical assessment for a job I applied for and I had to make a CLI application using the Google Books API. That sounded simple enough since I had done a couple of CLI apps in my boot camp in Ruby.

When I decided to do this technical assessment in Ruby, I was feeling pretty confident about it, until I actually sat down and tried to do it! I realized I hadn't touched anything in Ruby-land for months and suddenly became very anxious about how this project was going to go. After a shaky start, I found some great resources (that I'll share at the end of this post) that helped me become more at ease.

So the first thing you'll need to do is make sure that you install 'rspec' and 'rspec-expectations'. 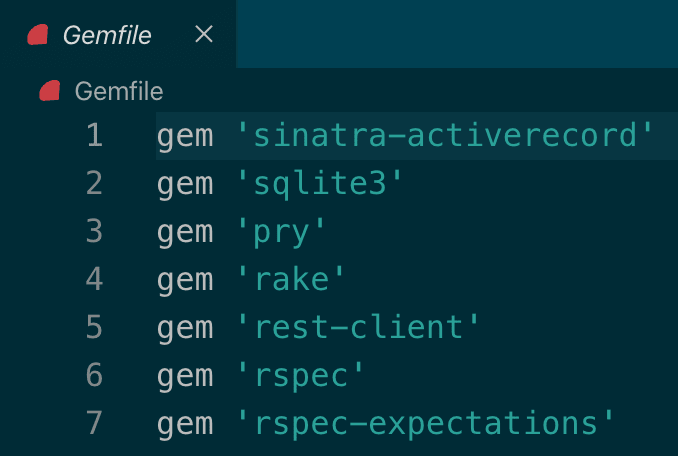 Then, run 'rspec --init' to create the spec folders/files for your project.

There's some basic syntax that comes with RSpec which is really easy and a great way to start learning about testing. Take a look at the screenshot below and I'll go into more detail about it. 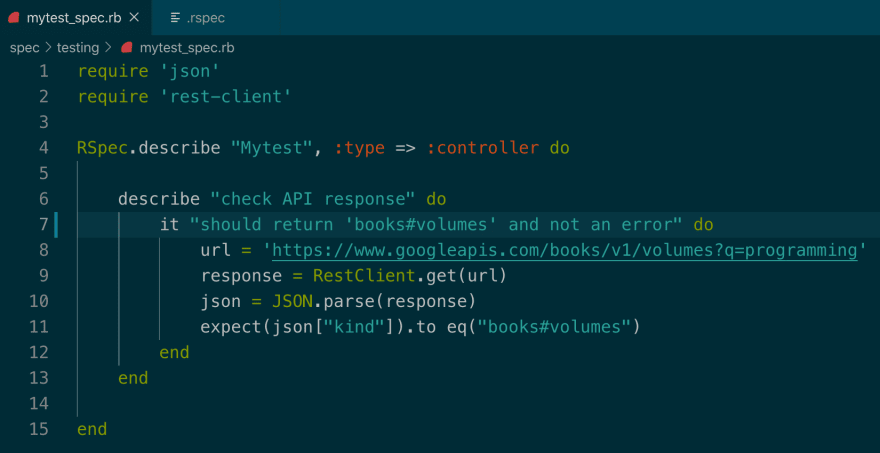 As you can see, I created a file called 'mytest_spec.rb' where I've required json and rest-client at the top of the file. This is so that when I make a request to the specified endpoint, my app will be able read and parse the information it receives. Line 4 defines the which type of test is going to run, is it for a controller? Model?

'context' is optional for test writing but I find it to be a nice way to group tests together. The next part, 'it' is what will show up in the terminal when you run the tests, so whatever you are expecting, write a sentence about it there. I didn't use 'context' for this project but if you're interested in seeing it used, I'll provide an example towards the end of this blog.

I'm testing if the response I get from the Google Books API is good and doesn't send back an error so on line 11, I define what I'm expecting to happen once a call is made to the API.

To run a test, type 'rspec spec/testing/mytest_spec.rb' or whatever your file path is into your terminal. You should see something like this:

Yay! The first test passed! I'm still figuring out some things will RSpec (and for this app, how to use it without Rails) so I hope that in the next blog I'll be able to show you more complex tests.

I have written some tests in RSpec for a Rails app, here's an example if you're interested in checking it out. 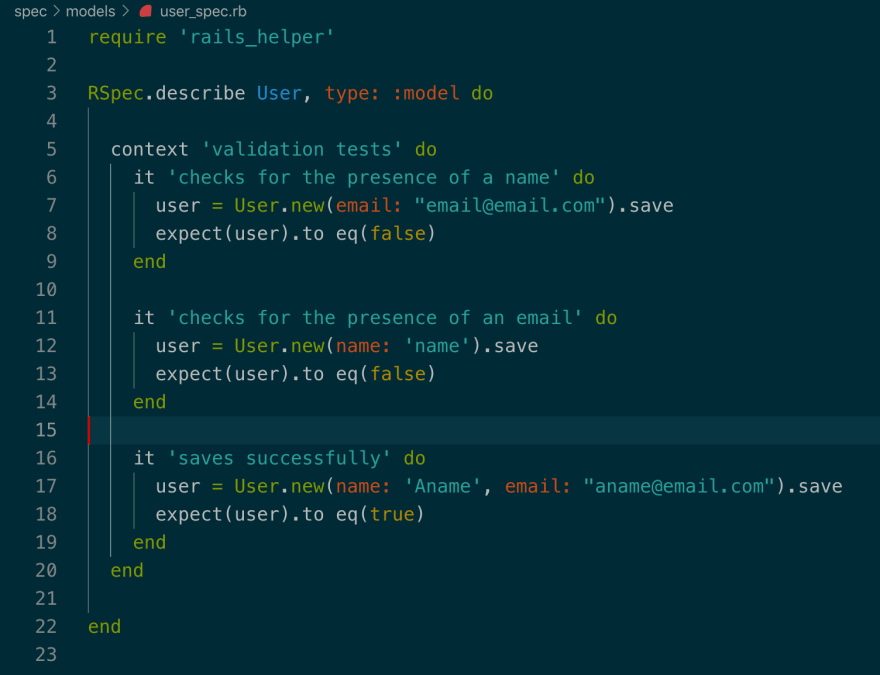 That's all I have for now, but I'll be back next week!

If you have any tips/tricks or know of any good resources for test writing, please let me know in the comments. :)

Aliya Lewis
A new fish in the sea of software engineering.
What Do You Do When You're Stuck?
#beginners
Git it? Got it? Good.
#git #beginners
Testing the Waters with RSpec (Part 2)
#testing #ruby #beginners

Once suspended, aliyalewis will not be able to comment or publish posts until their suspension is removed.

Once unsuspended, aliyalewis will be able to comment and publish posts again.

Once unpublished, all posts by aliyalewis will become hidden and only accessible to themselves.

If aliyalewis is not suspended, they can still re-publish their posts from their dashboard.

Once unpublished, this post will become invisible to the public and only accessible to Aliya Lewis.

Thanks for keeping DEV Community 👩‍💻👨‍💻 safe. Here is what you can do to flag aliyalewis:

Unflagging aliyalewis will restore default visibility to their posts.