The process of going from an idea to a product is a messy one. Learning how to prototype your idea, getting feedback, and iterating on it is the most critical skill anyone aspiring to build their own products should have. This is also one of the most significant parts of a UX Designer’s job.

Prototypes come in many forms, from a rough sketch on paper to an interactive simulation that looks like the final product. This guide is for complete beginners who want to understand what Prototyping is all about.

We’ll cover the meaning of a few terms related to rapid prototyping as well as the following: 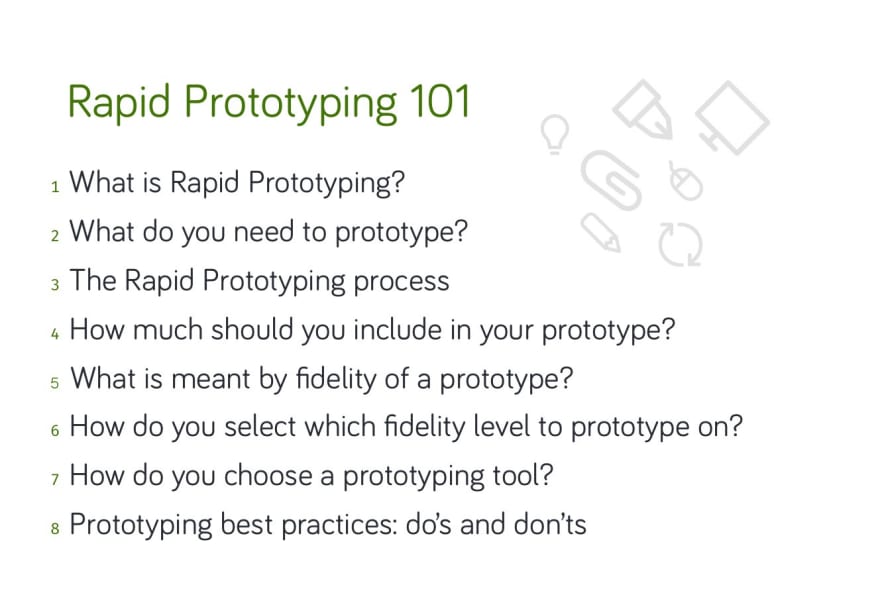 What is Rapid Prototyping?

Rapid Prototyping is an iterative process used to visualize what a website or an application will look like in order to get feedback and validation from users, stakeholders, developers, and designers.

When used well, rapid prototyping will improve the quality of your designs by enhancing communication between the various parties and reducing the risk of building something that no one wants.

What do you need to prototype?

A prototype is not designed to be a fully functional version of a system, but is only meant to help visualize the user experience of the final product. As Google Ventures design partner Daniel Burka says:

You can prototype not just screens, apps, or websites, but almost anything. Prototyping is an excellent method to test the following (examples provided):

So, now you understand what rapid prototyping is for. But how do you do it? We’ll cover that next.

Rapid Prototyping involves a three-step process, repeated as many times as needed: 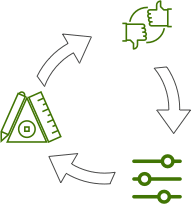 A prototype will usually start with a very simple mock-up of key areas and become more complex with each iteration as you gather more data from user feedback.

How much should you include in your prototype?

Focus on the critical functions that will be used most often. The point of rapid prototyping is to show how a feature will work or what the design will look like without prototyping the entire product in detail. Remember, we’re aiming for the Goldilocks quality!

Prototype one User Flow at a time. Instead of going screen by screen, base your prototype on a story that will take the user through the areas that you want to prototype. This way, you will get more accurate feedback because your prototype will reflect real life scenarios. For instance, prototype the “sign-up/sign-in/reset password” flow together.

Also, remember to have an iteration plan in mind. A good rule of thumb when planning iterations is to start broad and then work your way towards a more detailed version of the solution. As you iterate, the fidelity of your prototypes, as well as how much you include in them, will increase.

But wait, what is this fidelity?

What is meant by the fidelity of a prototype?

Fidelity refers to how closely a prototype matches the final product or solution. You can choose from a lot of different options and levels of accuracy, depending on the stage of the process and the goal of the prototype.

Layout and design are the most noticeable aspects of a prototype’s fidelity. If a prototype is produced with a high level of visual fidelity from the beginning, users will tend to focus on visual rather than functional details, which would distract from the primary goal of the early stages of prototyping. 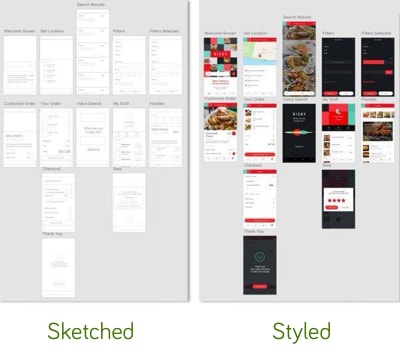 Should the prototype be static, or does it have to look fully functional (interactive)? Both versions have pros and cons: static prototypes are simpler and quicker to implement, while interactive ones can be used later for usability testing and user training.

In the early stages of prototyping, standard “lorem ipsum” content can be useful to avoid distracting the user so they can focus on providing functional feedback instead of commenting on changes in the text.

However, as the prototyping process continues, evaluate the need to replace dummy text with real content so users can get a feel for how it affects the overall design.

Using real labels is also an excellent opportunity to test whether your “copy” is working well or not. “Copy” is just a fancy term for text labels and information you see on the screen, like calling the “Publish” button “Publish,” “Post,” “Send,” “Done” or something else.

How do you select which fidelity level to prototype on?

Most of the time, designs are best evaluated by starting with a rough sketch, then moving on to higher fidelity levels depending on the system’s complexity and requirements.

Sometimes, your choice might be guided by client requirements or areas of focus. For example, if you want to evaluate the visual impact of an interface change, you might want to go with a styled design instead of a rough sketch. Or if your solution is message focused, you may decide to use real content instead of standard “lorem ipsum” placeholder text.

How do you choose a prototyping tool?

There is a wide variety of tools available for prototyping depending on your needs and approach. Before choosing a tool, here are a few questions to ask:

Thanks for reading this quick guide. This was originally published as part of the UX Design course on Commonlounge, a platform that has courses with small bite-sized lessons like these on topics ranging from Web Development to Machine Learning to Data Science We write guides to deliver you the most value for the time you invest reading ❤️

Web3: the unique technology and challenges behind the hype

Anant Jain
I'm building Commonlounge.com, an educational platform with wiki-based short courses on Machine Learning, Web Development, UX/UI Design and many more topics!
Should Developers Specialize or Generalize?
#career #beginners #webdev #codenewbie
Music Monday — What are you listening to? (70's Edition)
#watercooler #discuss #music
Why I Decided to Invest in My Portfolio as a Junior Developer
#webdev #career #codenewbie #help

Once suspended, anant will not be able to comment or publish posts until their suspension is removed.

Once unsuspended, anant will be able to comment and publish posts again.

Once unpublished, all posts by anant will become hidden and only accessible to themselves.

If anant is not suspended, they can still re-publish their posts from their dashboard.

Once unpublished, this post will become invisible to the public and only accessible to Anant Jain.

Thanks for keeping DEV Community 👩‍💻👨‍💻 safe. Here is what you can do to flag anant:

Unflagging anant will restore default visibility to their posts.