A few months ago I've read a book by Pat Shaugnessy called Ruby Under Microscope. It taught me a lot about Ruby's internals and inspired to dive a bit deeper than normally and try building an extension to the language. 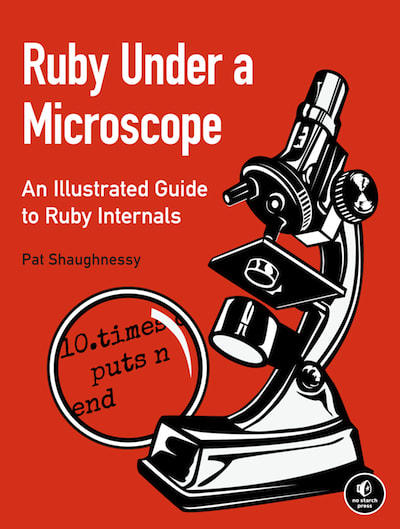 As most of Rubyists know Ruby is a language originally written in C language by Yukihiro Matsumoto. The C implementation is called MRI (Matz's Ruby Interpreter) and it supports writing plugins that can "talk" to any C program of choice. I'd like to show you how I built my first extension, that it really isn't that difficult and potentially can bring you huge benefits in terms of performance.

Before we start, keep in mind that apart from MRI there's a bunch of other Ruby language implementations, e.g. jRuby written in Java, Rubinius written in... Ruby and many others, so the C extension that I'm presenting in the article will most probably not work with other platforms than MRI.

Ladies and gentlemen, I present you the MatrixBoost library 👏

I didn't want to create YAHW (Yet Another Hello World) extension, so I spent quite some time thinking what exactly should I implement, but finally after some brainstorming I came up with an idea. I've noticed that the Matrix gem which is a part of Ruby's standard library is completely written in Ruby, so I decided to write a gem that'd reimplement some of the common matrix operations in pure C. Such library should come in handy for people whose programs heavily rely on Ruby's Matrix library and perform lots of matrix operations.

That's how I started working on MatrixBoost library. I decided that my gem will incorporate https://github.com/nhomble/yasML which is a very simple matrix implementation written in C.

The main idea is that:

In the next paragraphs you'll see what were the necessary steps to achieve it. 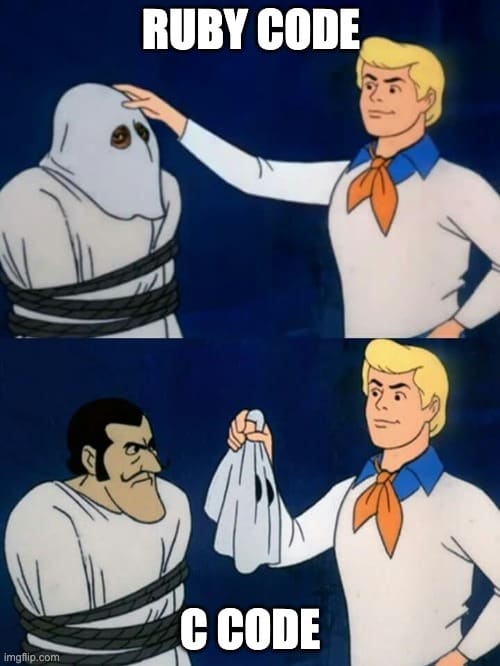 First thing that needs to be done is to create all the boilerplate required for a Ruby gem. You can e.g. follow up this guide or copy-paste from MatrixBoost repository.

In your gemspec file make sure to add ext folder to the list of required paths, like this: spec.require_paths = ["lib", "ext"]. It'll be necessary for the gem to load the extension code we're going to add.

In ext directory create a file called extconf.rb with the following content:

When you execute the extconf.rb file then the mkmf library (part of the Ruby extension build system) will prepare a Makefile required to compile the C part of the gem.

The extconf.rb in my snippet is the simplest possible config, but of course if needed it can be extended to do things like generating header files, checking other necessary C dependencies or configure C compiler options.

You can check out what mkmf is capable of here.

Here's the most interesting and at the same time the most difficult part. We'll need to write a C file which'll serve as an entry point from the Ruby code. It'll add a Ruby module with functions that'll convert a Ruby arrays into C arrays, perform desired matrix operations and convert the results back into a Ruby array.

In order to initialize the extension Ruby will search for a method called Init_extension(void) in a file named ext/matrix_boost/extension.c. This function will define a Ruby module with functions performing matrix operations, like inv_matrix, mul_matrix. These functions will be executed in our C extension.

Here's how a basic extension.c with Init_extension will look like:

Let's now take a look at inv_matrix function implementation to see how to Ruby objects can "talk" to the C matrix library:

First, it calls Check_Type function from Ruby C API that'll verify that the m argument is a Ruby array. If the check fails, a following error will be raised:

Next thing we need to do is to call matrix_destroy(mc) in order to free the memory after mc variable to prevent memory leaks. Remember, it's C, there's no Garbage Collection here ;)

If it succeeded, we'll copy the inverted matrix to a new Ruby array and free the memory after the matrix struct.

Notice that the return type of our function is VALUE. VALUE type is defined by MRI and is basically a pointer to a Ruby object.

Translating Ruby arrays to C matrices (and opposite)

In previous paragraph we skipped the part about converting the arrays from Ruby to C and opposite. Let's now take a look at these functions and explain some of more interesting parts.

In order to initialize the C matrix we need the number of rows and columns from the Ruby array. To get the length of a Ruby array from C level we'll use a method called RARRAY_LEN from Ruby's C API.

Next, we'll iterate over each cell of the array, getting the element values by calling rb_ary_entry and converting the Ruby Numbers to C doubles by calling theNUM2DBL function. The resulting number will be assign to a proper cell in the C matrix.

In matrix_to_rb_array we're doing pretty much the opposite:

First, we initialize a new Ruby array by calling rb_ary_new(). We'll then fill it by copying the values from the C matrix.

In the for loop we're getting the value of each matrix's cell, converting it from double to Ruby Number by calling DBL2NUM (opposite to what we called in rb_array_to_matrix and appending the value to the current row by calling rb_ary_push.

The extension's code is ready, but before we can use it in a Ruby program we'll have to compile the C code.

In order to do it we'll add a following rake task to our gem's Rakefile:

And run it by calling bin/rake compile.

Now, if we call require "matrix_boost/extension" in our gem we'll be able to use the C extension from the Ruby code.

We'll define our lib/matrix_boost.rb as follows:

Now in terminal run the console by calling bin/console and compare the results of original Ruby method with MatrixBoost.invert.

Great, our extension is working as expected! Now let's benchmark it to see how much we really gained by performing the matrix operations in C.

It turns out that C implementation is ~5.2x faster! It should make a difference for programs heavily relying on matrix operations, like ray tracers (who writes ray tracers in Ruby is another question 🙈).

Even though C language might be scary for some people compared to Ruby and though Ruby's C API is a bit messy and not very well documented I think it's worth giving it a shot and trying to write a simple C. Especially when a part of your program needs a performance Boost or if you want to integrate a C library into your codebase.

Full code for matrix_boost library can be found here.

Knowledge about C extensions in Ruby is a bit scattered around the Internet, so I collected some links worth checking if you're struggling with writing your own extension:

Thanks for keeping DEV Community safe. Here is what you can do to flag bajena: