It is a high level data model diagram which defines the conceptual view of the database. It indicates the relation among entities.
Before making the actual database, first the ER-diagram is drawn to show the relations and many more things.

Entity Set - It is a set (or collection) of entities of the same type which share the similar properties or attributes.

An entity can be characterized into two types:

2) Attributes - They are the properties that describe the entity.

An attribute can be characterized into:

1) Simple Attributes: They are represented by oval.

2) Multi-valued Attributes: Multiple values for a single attribute. They are represented by double oval.

3) Single-Valued Attributes: Each and every entity will have only one value.
Example - ID

4) Composite Attributes: Those attributes that can be divided further.

5) Derived Attributes: Those attributes whose values are derived from another attribute. They are represented by dotted oval.

Age is a derived attribute since age can be derived from the Date of Birth.

3) Relationship
It indicates how each and every entity is related with every other entity.

Degree of Relationship: A relationship where a number of different entity set participate is called as degree of a relationship.

Degree of relationship can be categorized into the following types:

1) Unary - Only one Entity set participates in a relationship. 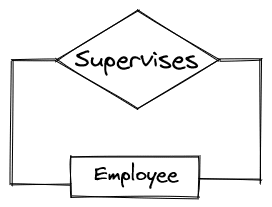 It is further divided into four types:
i) One-to-One:

3) Ternary - When three entity sets participate in a relationship.

4) n-ary - When more than three entity set involves in a relationship, it is called n-ary relationship.

That's all for today.
Thank You.
Hope to see you in my next article...

Once suspended, hebashakeel will not be able to comment or publish posts until their suspension is removed.

Once unsuspended, hebashakeel will be able to comment and publish posts again.

Once unpublished, all posts by hebashakeel will become hidden and only accessible to themselves.

If hebashakeel is not suspended, they can still re-publish their posts from their dashboard.

Once unpublished, this post will become invisible to the public and only accessible to hebaShakeel.

Thanks for keeping DEV Community safe. Here is what you can do to flag hebashakeel:

Unflagging hebashakeel will restore default visibility to their posts.