Selenium is one of the widely used test automation frameworks for automated browser testing. Selenium test automation is really helpful in testing websites or web apps on different combinations of browsers, operating systems, and devices. Giving better functional test coverage as the code is tested on a wide range of combinations.

Running these tests in sequence can be really time-consuming, as you’d wait for one test to complete before running other tests. You can save a lot of time by performing tests in parallel, thus improving the scalability of your Selenium test automation. Parallel testing helps in performing tests on browsers simultaneously, providing better test coverage in a shorter time.

In this Selenium Python tutorial, I’ll show. you how to run parallel tests with Selenium with Python and pytest using Selenium Grid. The Selenium Grid to run can either be local or cloud-based. For more information on setting up the local Selenium Grid, we recommend to have a look at our detailed blog on Setting up Selenium Grid for automation testing.

How To Run Selenium Tests In Parallel With Python Using pytest-xdist?

By default, PyTest does not support parallel testing which is extremely essential for scenarios such as automated browser testing. Parallel testing is a must-have to achieve continuous integration as tests can be executed at a rapid pace. To run Selenium tests in parallel with Python, you need to install the pytest-xdist plugin.

Features (or Execution Modes) of pytest-xdist

It is a PyTest distributed testing plugin that extends PyTest with some unique execution modes mentioned below in this Selenium Python tutorial :

The xdist plugin can be installed by executing either of the following commands on the terminal:

Shown below in this Selenium Python tutorial is the installation screenshot of xdist plugin to run Selenium tests in parallel with Python.

The pytest-xdist plugin provides command-line options for sending tests to multiple CPUs. The number of CPUs is passed after the option –n.

The option speeds up the parallel execution for lengthy tests, as well as, tests that have frequent I/O (Input/Output) operations in the implementation. pytest-xdist (or xdist-plugin) has many other options, details of the same are available in the xdist-plugin documentation.

To demonstrate the usage of pytest-xdist plugin to run Selenium tests in parallel with Python, I’ll take four test scenarios for this Selenium Python tutorial which I’ll execute on Chrome and Firefox web browsers. The four test scenarios are divided across two python files and the fixtures are shared via conftest.py. For more detailed information on PyTest fixtures and usage of conftest.py, you can refer to a previous Selenium Python tutorial on PyTest fixtures.

Fixtures for invoking the Chrome and Firefox browser are added in Conftest.py. The file is placed in the root folder where the files that contain implementation for the test cases are also located.

As different URLs are used for automated browser testing, the scope is set to class (instead of the session) and a new browser instance is loaded for each test.

This file contains the implementation of Test Scenario – 1 (Run Selenium tests in parallel with Python on Chrome Browser). The @pytest.mark.usefixtures decorator is included for using the fixture driver_chrome_init().

It contains two test cases to run Selenium tests in parallel with Python:

close() command in Selenium WebDriver is used to close the browser window once the test execution is completed.

Two tests are performed in parallel. Hence, -n option (i.e. num_of_cpus) is set to 2. Execution is performed by invoking the following command on the terminal.

Here is the screenshot of the execution which indicates that two tests are performed simultaneously (i.e. in parallel).

As seen below in this Selenium Python tutorial, all the four tests have passed to run Selenium tests in parallel with Python in pytest.

There is a limitation when it comes to testing on a local machine as you can only load certain browsers (and their versions) on the local machine. For example, it is not feasible to keep different versions of a particular browser on the same machine. If you own a machine with Mac OS, you may find it difficult to perform automation browser testing on Internet Explorer or Edge browsers.

The ideal execution environment should be a network of different interconnected machines that have different browser environments so that tests can be executed in parallel. This is what Selenium Grid is built for. Selenium Grid was created as part of the Selenium Suite by Phillipe Hanrigou in 2008.

Time to Market (TTM) is particularly important for consumer-facing products. As a test manager, a conscious decision has to be taken on whether it is viable to set up an in-house testing infrastructure (or local Selenium Grids) with different VMs. Setting up the local infrastructure for rare (yet important) combinations such as cross browser testing with IE on Mac OS can turn out to be a big task.

Below in this Selenium Python tutorial are some of the major challenges that testers might face when performing cross browser testing on a local Selenium Grid:

By shifting cross browser testing to an online Selenium grid, the test team can focus squarely on the task at hand, rather than being worried about the upkeep of the in-house test infrastructure.

Irrespective of the size of infrastructure, you would still need an in-house team to look after the reliability & maintenance of the Selenium grid infrastructure. The actual costs incurred in setting up the infrastructure can turn out to be significantly higher than the ballpark estimates.

Shifting the cross browser testing activity to a fast and reliable online Selenium Grid such as LambdaTest helps in accelerating the automated browser testing process. It also leads to improving the team’s productivity as all activities related to Selenium automation testing are centralized in one place.

Getting started With Parallel Testing on a online Selenium Grid

LambdaTest offers a reliable & scalable online Selenium Grid infrastructure that allows you to test on 2000+ real browsers and operating systems online. The complete list of available browsers is available here.

The major advantage of using a reliable online Selenium Grid infrastructure like LambdaTest is there is no need to install any additional software (or plugin) on your machine. The browsers on VMs in LambdaTest have pre-installed versions of Adobe Flash, Adobe Shockwave, Adobe Reader, Microsoft Silverlight, etc. hence, making it easy to test RIA (Rich Internet Applications). More details about the LambdaTest platform are available on the FAQ Page.

To get started with cross browser testing on LambdaTest, perform the following steps:

Before porting the existing implementation to LambdaTest’s Selenium Grid, we generate the required browser capabilities using a capabilities generator on LambdaTest. For the demonstration, we use the same examples that were demonstrated earlier.

The Capabilities generator is used to generate capabilities for (browser + OS combinations). As the test framework being used is PyTest, we choose the language as Python.

The parameters supplied to the desired capabilities to run Selenium tests in parallel with Python are below in this Selenium Python tutorial:

You can also enable the headless option to perform automated browser testing on web browsers without the GUI (Graphical User Interface). 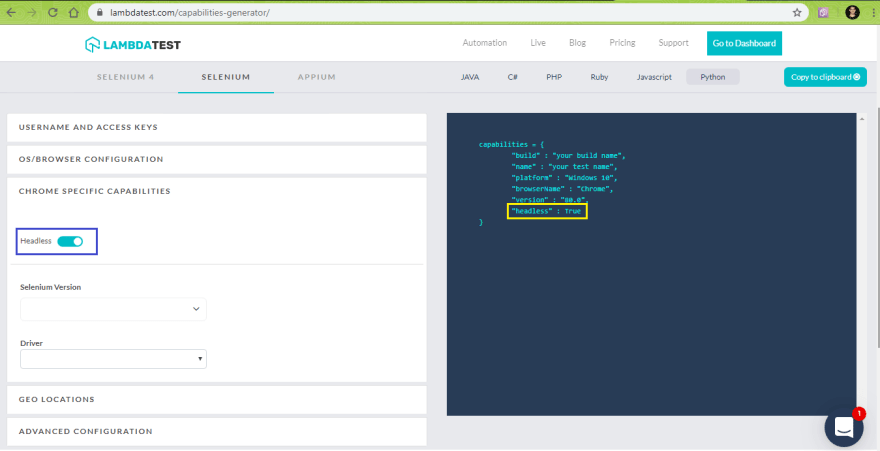 As the tests are executed on the online Selenium Grid on LambdaTest, credentials consisting of a combination of user-name & access token is used to access the LambdaTest Grid URL – @hub.lambdatest.com/wd/hub.

conftest.py is used to share fixtures across files. Changes for porting from local Selenium Grid to LambdaTest’s Selenium Grid are only done in conftest.py. These are infrastructure changes to make the code work on the LambdaTest Grid. 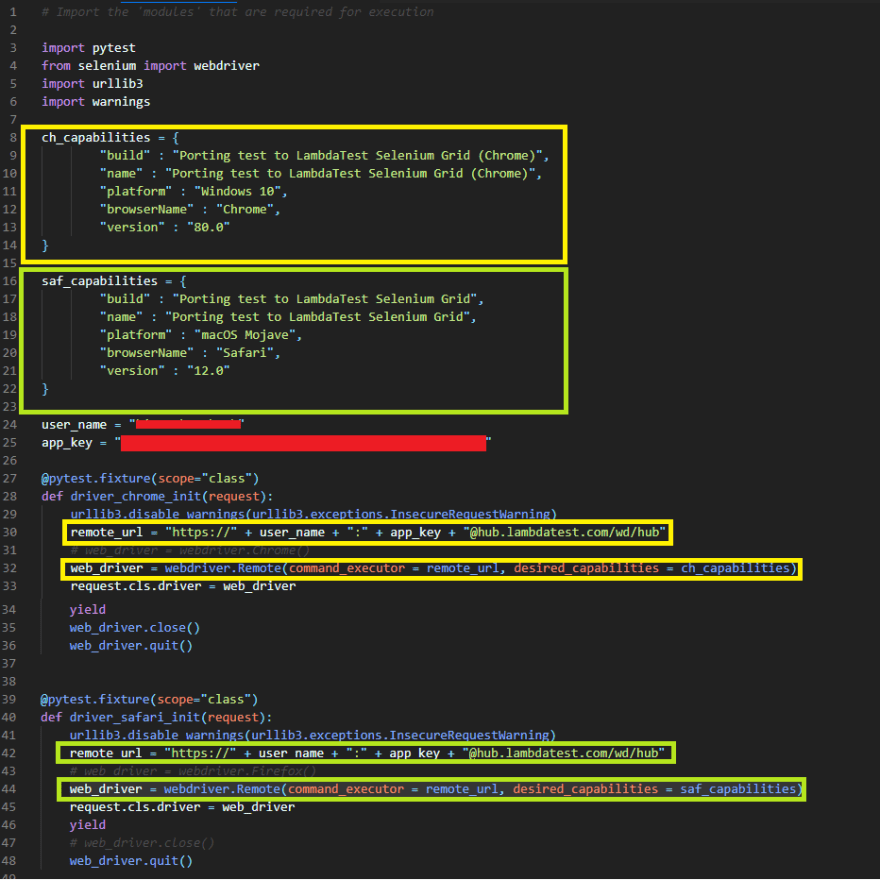 The changes are only related to porting the test to the online Selenium Grid on LambdaTest.

For executing the code on the online Selenium Grid on LambdaTest, we use the pytest-xdist plugin with a number of parallel tests set to 4. The reason for selecting 4 is because my current billing plan on LambdaTest enables the execution of 5 tests in parallel.

Execute the following command on the terminal to run Selenium tests in parallel with Python:

Here is the screenshot of the execution which indicates that four tests are running in parallel on the online Selenium Grid:

Here is the terminal execution screenshot indicating that all the four tests to run Selenium tests in parallel with Python have passed.

The status of automation tests can be accessed by visiting the Automation Timeline on LambdaTest. You can have a look at the overall execution of the tests by navigating to those tests. 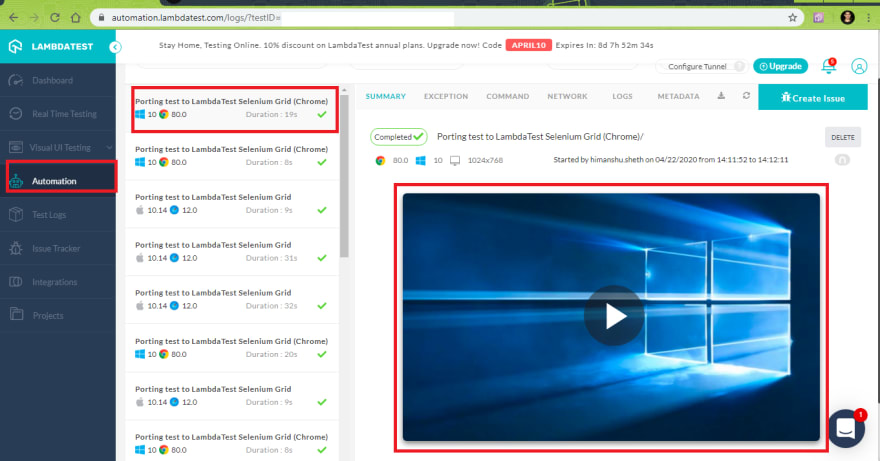 As seen below in this Selenium Python tutorial, the tests have executed successfully on the online Selenium Grid.

Testing on an online Selenium Grid also aids in improving the test coverage as testing can be performed on varied combinations of browsers, platforms, and devices. With minimal efforts (and code changes), existing test implementations can be ported to work with an online Selenium grid.

I hope you found this article informative and found it helpful. In case of any doubts, do reach out in the comment section down below. Also, I’d love it if you could share this Selenium Python tutorial with your peers and colleagues, this might help them if they’re facing any challenges to run Selenium tests in parallel with Python. That’s all for now!😊

himanshuseth004
I am an engineer with 15+ years of experience. Worked with multi-national companies as well as startups. Also an avid blogger on technology.
Page Factory in Selenium For Web Automation Testing
#webdev #beginners #tutorial #testing
How To Create Data Driven Framework In Selenium
#webdev #tutorial #selenium #testing
How To Perform Cypress Testing At Scale With LambdaTest
#webdev #cypress #beginners #tutorial

Once suspended, himanshusheth004 will not be able to comment or publish posts until their suspension is removed.

Once unsuspended, himanshusheth004 will be able to comment and publish posts again.

Once unpublished, all posts by himanshusheth004 will become hidden and only accessible to themselves.

If himanshusheth004 is not suspended, they can still re-publish their posts from their dashboard.

Once unpublished, this post will become invisible to the public and only accessible to himanshuseth004.

Thanks for keeping DEV Community 👩‍💻👨‍💻 safe. Here is what you can do to flag himanshusheth004:

Unflagging himanshusheth004 will restore default visibility to their posts.