For three minutes, I was dead.

I was dead. What should have been a "simple" operation turned into a life-altering, life-ending event. In the middle of surgery, I threw an air-embolism (air in the veins or arteries). I went into respiratory arrest and then quickly into cardiac arrest.

For three minutes I was dead.

I thought I was finished having children and then suddenly, there I was staring at two pink lines. My youngest child was 6 years old and though she had been begging for a younger sibling, I had no intentions of giving her one.

But there we were ... and we were all so excited.

That excitement was very short lived when I started having severe pain in my right lower abdomen. I begged my doctors to look at it. To do an ultrasound but they brushed it off.

Several days passed and the pain only worsened until Monday morning when I couldn't take the pain any longer. My husband took me to the ER where again the doctors told me it wasn't anything.

I was having an ectopic pregnancy, meaning instead of the baby developing in the uterus, it was developing in my tubes. That also meant there was no way for the baby to survive and at this point, the only thing to do was to save me before my tubes ruptured. They waited too long. My right tube ruptured and they rushed me to surgery.

I went through the worst depression I had ever faced. I couldn't get off the couch. I couldn't put one foot in front of the other. All I could do was cry for weeks. Our hearts were broken.

My little one tried so hard to comfort me but I was devistated. How could I miss someone I had never met?

My hair started falling out by the handfull. At my next appointment, there was fluid around my heart and my doctor said, "if you don't do something, you are going to die." I was literally grieving myself to death.

An Advertisement on Candy Crush to Learn to Write Code

My husband was playing Candy Crush when he came across an advertisement for an online coding bootcamp.

Knowing how I love to learn new skills, he forced me to get off the couch and sign up for the school. I got in!!!! While it didn't end my depression, it changed my focus. Of all the difficult things I've done in my life, the hard skills I've learned, coding was by far the most challenging. It took everything in me just to focus and grasp the new concept.

But I did it. I got off the couch. I logged in daily to my lectures and I did the work. I fell in love with coding and found a purpose to keep going.

I quickly realized that if I could learn to code, I could create anything. I could develop any app I could imagine and then with coding, I could not only change my own life but the lives of so many others.

Her Time to Code

Because I am a visual learner, I began creating learning tools and products to help me get through the concepts. I soon realized those same learning tools would help many others like me who had no prior coding experience.

I will continue creating learning tools and products to help women break into the tech industry.

How Coding Can Save Someone Else's Life

If you're interested in becoming a web developer, download my FREE HTML/CSS at a Glance Reference Cards (while they're FREE!!) 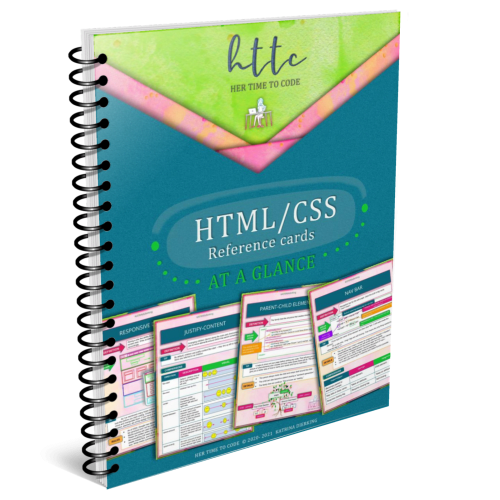