Just over a year ago Google made all the open source code on GitHub available for querying within BigQuery and as if that wasn't enough you can run a terabyte of queries each month for free!

So in this post I am going to be looking at all the C# source code on GitHub and what we can find out from it. Handily a smaller, C# only, dataset has been made available (in BigQuery you are charged per byte read), called fh-bigquery:github_extracts.contents_net_cs and has

Which is a pretty comprehensive set of C# source code!

The rest of this post will attempt to answer the following questions:

Then moving onto some less controversial C# topics:

Before we end up looking at repositories, not just individual C# files:

If you want to try the queries for yourself (or find my mistakes), all of them are available in this gist. There's a good chance that my regular expressions miss out some edge-cases, after all Regular Expressions: Now You Have Two Problems!!

In the entire data-set there are 5,885,933 files, but here we only include ones that have more than 10 lines starting with a tab or a space

Clearly, C# developers (on GitHub) prefer Spaces over Tabs, let the endless debates continue!! (I think some of this can be explained by the fact that Visual Studio uses 'spaces' by default)

If you want to see how C# compares to other programming languages, take a look at 400,000 GitHub repositories, 1 billion files, 14 terabytes of code: Spaces or Tabs?.

regions: 'should be banned' or 'okay in some cases'?

It turns out that there are an impressive 712,498 C# files (out of 5.8 million) that contain at least one #region statement (query used), that's just over 12%. (I'm hoping that a lot of those files have been auto-generated by a tool!)

This is slightly unscientific, but I wanted to see how widely the Lambda Operator => is used in C# code (query). Yes, I know, if you want to write functional code on .NET you really should use F#, but C# has become more 'functional' over the years and I wanted to see how much code was taking advantage of that.

So we can say that:

Which using statements are most widely used?

Now on to some a bit more substantial, what are the most widely used using statements in C# code?

The top 10 looks like this (the full results are available):

Finally, an interesting list is the top 10 using statements that aren't System, Microsoft or Windows namespaces:

What NuGet packages are most often included in a .NET project?

It turns out that there is also a separate dataset containing all the 'packages.config' files on GitHub, it's called contents_net_packages_config and has 104,808 entries. By querying this we can see that Json.Net is the clear winner!!

How many lines of code (LOC) are in a typical C# file?

Are C# developers prone to creating huge files that go one for 1000's of lines? Well some are but fortunately it's the minority of us!! 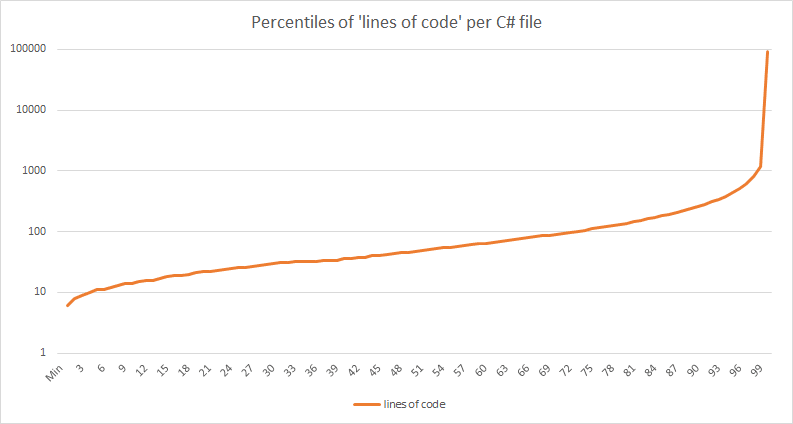 Note the Y-axis is 'lines of code' and is logarithmic, the raw data is available.

And in case you're wondering, here's the Top 10 longest C# files!!

What is the most widely thrown Exception?

There's a few interesting results in this query, for instance who knew that so many ApplicationExceptions were thrown and NotSupportedException being so high up the list is a bit worrying!!

'async/await all the things' or not?

The addition of the async and await keywords to the C# language makes writing asynchronous code much easier:

But how much is it used? Using the query below:

Less that they use async and await, there are 130,590 files that have at least one usage of the var keyword

Just how many files should you have in a repository? 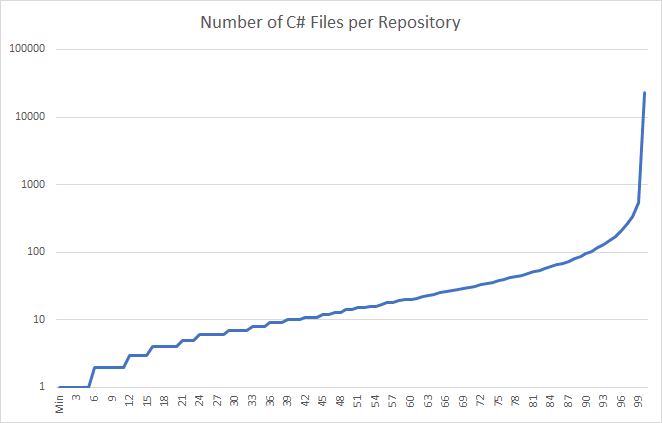 (again the Y-axis (# files) is logarithmic)

The top 10 largest repositories, by number of C# files are shown below:

What is the most popular repository with C# code in it?

This time we are going to look at the most popular repositories (based on GitHub 'stars') that contain at least 50 C# files (query used):

Interesting that the top spot is a Google Repository! (the C# files in it are sample code for using the GRPC library from .NET)

What are the most popular C# class names?

Assuming that I got the regex correct, the most popular C# class names are the following:

Yay for Foo, just sneaking into the Top 10!!

'Foo.cs', 'Program.cs' or something else, what's the most common file name?

Finally lets look at the different class names used, as with the using statement they are dominated by the default ones used in the Visual Studio templates:

As always, if you've read this far your present is yet more blog posts to read, enjoy!!

BigQuery analysis of other Programming Languages

How to write Clean, Beautiful and Effective C++ Code

Why We should care about Floating-Point Numbers?