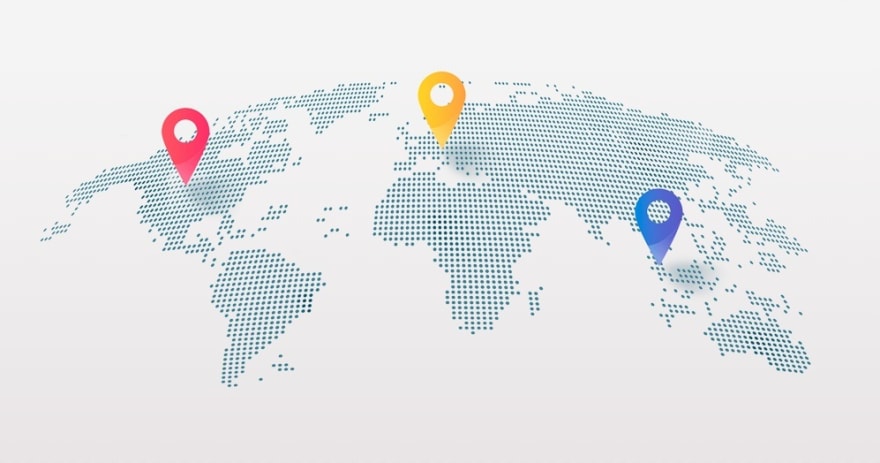 Content Delivery Networks (CDN) are generally used by sites and applications for speeding up the loading of static elements. This is accomplished by caching files on CDN servers located in various regions of the world. Having requested data via CDN, the user receives it from the nearest server.

The underlying principles behind CDNs and their functionality are approximately the same for all of them. Having received a request for a file, a CDN server takes it once from the origin server and then transfers it to the user and caches a copy of it for a period of time. Further requests for the data are handled using the cache. All CDNs have options for pre-loading files, cache clearing, cache retention times and much more.

Sometimes, for various reasons, one might find oneself in need of building one's own CDN, and so, we present the following guide on how to realize it.

When do you need your own CDN?

Let's take a look at situations where you might need to create your own CDN:

In most other cases, it is more viable to use existing ready-made solutions.

To build even a simple content delivery network you need the following:

Registering a domain name is easy — just register it in any domain zone you prefer. For CDN, you could use also a subdomain, like cdn.domainname.com. This is the case for the following example.

When it comes to servers, you should rent those in regions and countries where your target audience is located. If your project is intercontinental, it is convenient to select from among hosting providers that offer servers across the world, such as OVH, Leaseweb and 100Tb (for dedicated servers), or Vultr and DigitalOcean (for virtual and cloud servers).

For our private CDN, let's order three virtual servers on different continents. Vultr offers us 25GB SSD space and 1TB of traffic for $5/month. During installation, select the latest Debian. Here are our servers:

To ensure the clients are directed to the proper (closest) servers upon sending requests to our domain or subdomain, we'll need a DNS server with geoDNS functionality.

A DNS server with geoDNS functionality is something you can build yourself, but it is better to use ready-made solutions that has servers arround the world and an out-of the-box Anycast option:

When ordering geoDNS you need to pay attention to the number of requests included in the package and keep in mind that the real requests number might greatly exceed your expectations. There are millions of web crawlers, scanners, spammers and other devilry at work at any given time.

Almost all DNS services include an useful feature for CDN building - DNS Failover. With it, you can configure activity monitoring so that if a server goes down the system will automatically redirect the clients to working servers instead.

For our CDN, let's use ClouDNS and its GeoDNS package.

In profile, add a new DNS zone and specify your domain name. If you're using subdomain, and the main domain is in use, don't forget to add the existing DNS records immediately after adding the zone. The next step is to create several A records for the CDN domain/subdomain, each of which will be used for the specified region. You can designate continents or countries as regions, and subregion options are available for the US and Canada.

In our example, the CDN will operate on the cdn.sayt.in subdomain. Having added the sayt.in zone, create the first A record for the subdomain and direct all NA clients to the Chicago server: 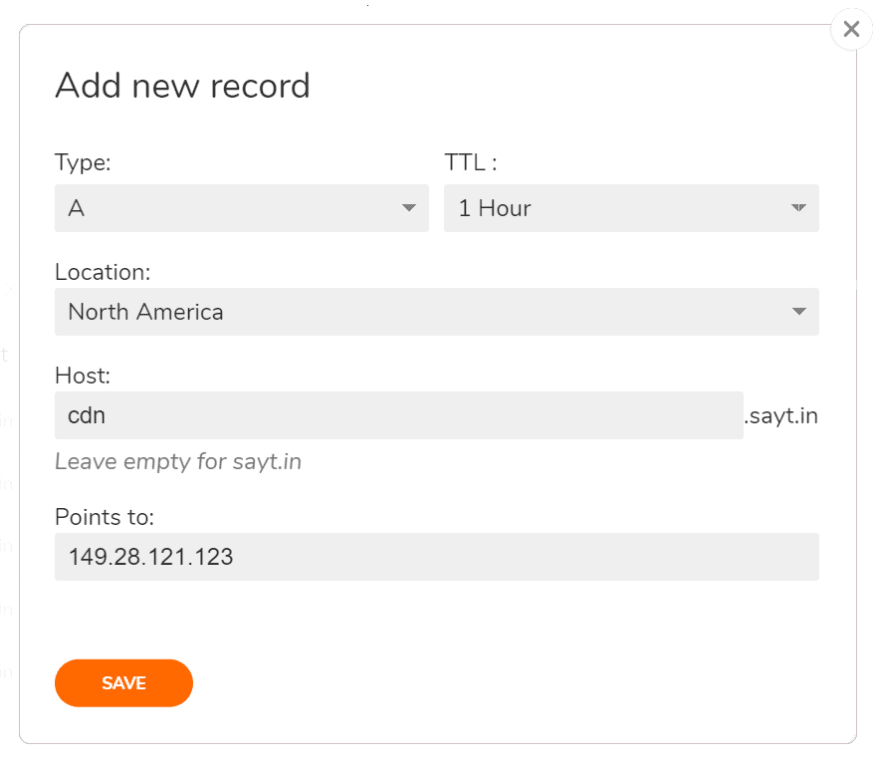 Repeat this step for the other regions and don't forget to create one record for default regions. Here's what the end result looks like: 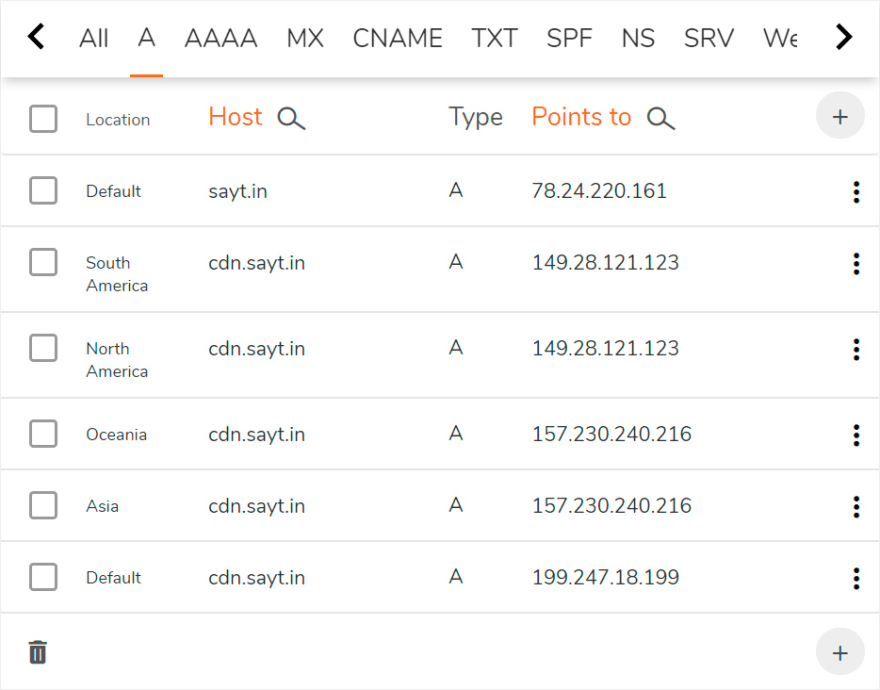 The last default record means requests from all unspecified regions (Europe, Africa, satellite Internet users, etc.) are to be directed to the Frankfurt server.

This concludes the basic DNS configuration. All that's left is to go to registrar website and replace the current nameservers with the ones provided by ClouDNS. While they're being updated, we'll set the servers.

Our CDN will operate using HTTPS, so if you already have SSL certificates for the domain or the subdomain, upload them to all the servers, for instance, to the /etc/ssl/yourdomain/ directory.

If you don't have any certificates, you can get it for free from Let's Encrypt. ACME Shell script is a great option. It has a user-friendly client and, more importantly, it allows to perform validation of the domain/subdomain via DNS using API by ClouDNS.

We'll install acme.sh on only one server — the European one (199.247.18.199), and from it, the certificates will be copied to all the others. To install it, run the following command:

During the installation a CRON task for automatic updating of the certificates will be created.

Domain verification upon issuance of the certificate will be performed via DNS using API, so in the ClouDNS profile, under Reseller API, create a new API user and specify a password for it. Enter the resulting auth-id along with the password into the following file: ~/.acme.sh/dnsapi/dns_cloudns.sh (not to be confused with dns_clouddns.sh). Here are the lines you need to uncomment and edit:

Now, let's request the issuance of the SSL certificate for cdn.sayt.in

For future use, in parameters, we left a command for automatic configuration reboot after every renewal of the certificate.

The process of acquiring the certificate might take up to two minutes, so do not interrupt it. In case a domain validation error occurs, try running the command again. In the end, we'll see where the certificates were downloaded.

As for SSL certificate, all we left to do is copy it to the two other servers saving the certificate paths. Create identical directories on each server and then copy certificate files:

To automate the certificate renewal, you need to create a daily CRON task on both servers. Below is the command you should to add to CRON jobs:

Keep in mind, that connection to the remote origin server requires an access by key without entering a password. Don't forget to create it.

For static content delivery we'll use Nginx, configured as a caching proxy server. Update the lists of packages and install it on all the three servers:

Instead of the default config, use the one below:

With nginx.conf handled, reload the configuration:

So, our CDN is ready to use! For $15/month we got PoPs on three continents and 3TB of traffic: 1TB for each region.

Let's take a look at ping to our CDN from different locations. Any ping services will do in this case.

The results are good. Now let's place a test image titled test.jpg on the main server and check how fast it loads via CDN. Said and done. The loading is fast.

Let's make a small script in case we need to clear cache on a CDN point.

To clear all cache on the server, simply run the script. If you need a some file purged, just specify its path:

To purge cache everywhere the script must be run on all CDN servers.

In lieu of conclusions

Finally, I would like to give some useful tips so that you can avoid falling into the pitfalls I already cleared: