In this blog post, you will learn how to create a React app and WebSocket that connects to the Flask server, and visualize streaming data in real-time using D3.js. I decided to write this blog post as a part of my learning path, and I hope to help anyone struggling with the same problems while trying to implement something similar. I decided to tackle on the frontend implementation by visualizing Twitter users who retweeted something with the hashtag #christmas. Each community of users is presented with a different color which allowed me to notice the important communities in the Twitter network.

The frontend service is a part of a web application that you can find in the GitHub repository. Besides that, the repository also holds a visualization that discovers the most Christmassy person on Twitter using the dynamic PageRank algorithm.

If you are using Windows, you need to install Windows Subsystem for Linux (WSL) and then Docker Desktop. On the other hand, if you are a Linux user, just install Docker and Docker Compose.

The app is dockerized and it consists of five services: 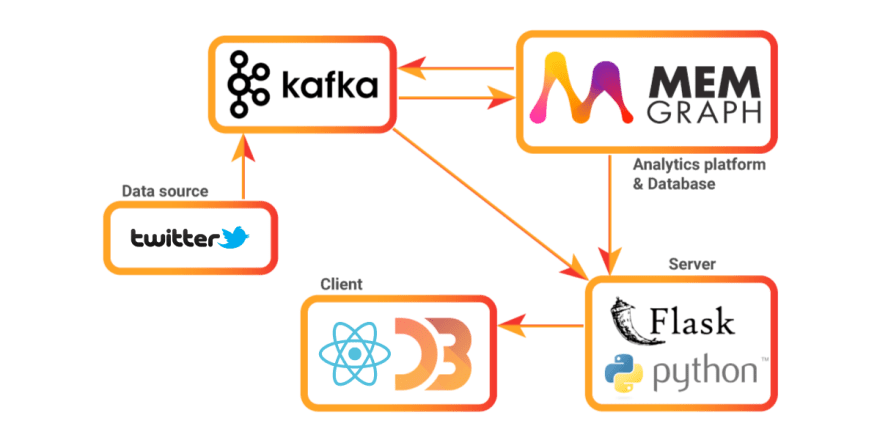 You can see the whole project structure in the GitHub repository. The blog post focuses on the frontend service and explains how the visualization was created.

The frontend folder was created using the create-react-app npm package. If you are starting from scratch and want to create a React app follow these steps:

Even a simpler way of creating a React app is by using npx - a package runner tool that comes with npm 5.2+. Then you just have to run:

I have used socket.io-client@2.3.1 since I had issues with the latest version. I am going to explain the process on the CommunityDetection component, since it's very similar to the PageRank component. If you are running the frontend application locally, and not using the provided dockerized application, make sure to install the library by running:

Don't forget that Node.js is a prerequisite for using npm.

First, we are going to import the socket we're using on the client side. Backend is implemented with Flask.

After that, we are initializing the socket.


You may ask yourself where to place all this socket.io code within a React component. First, I initialized the socket in the component's constructor. After that I have placed the socket events in componentDidMount() lifecycle method. This part of the React.Component lifecyle is invoked once, immediately after a component is mounted. If you need to load data from a remote endpoint, this is a good place to instantiate the network request. This method is also a good place to set up any subscriptions. That's why I have decided to place all socket events there. On each consumer emit, the state of the component will be updated and that will trigger an extra rendering which will happen before the browser updates the screen, so the user won’t see the intermediate state. Before I set up the socket, at the beginning of the componentDidMount(), I have made a simple HTTP request that will trigger the backend to start producing the needed data.

In the end, when the component unmounts (for example, when we click on the button to switch to the PageRank), the componentWillUnmount() lifecycle method is called and the client disconnects from the server.

If you want to learn more about React.Component lifecycle methods, check out the React official docs.

We want to draw the graph on svg using D3.js within the class component. We are going to do that by creating a reference in the component constructor which will be attached to the svg via the ref attribute. In constructor we have to use createRef() method.

Then, in the component's render() method we are adding the ref attribute with value this.myReference to the svg.

Now, by selecting the current attribute of the reference, it's easy to get the svg on which we are going to draw our graph.

If you want to know how to use D3.js within function component, check out one of my previous blog posts - Twitch Streaming Graph Analysis - Part 2.

In the updateGraph() method we have to draw the nodes and relationships using D3.js, where nodes will be colored depending on the community they belong to. We are receiving the community information through the cluster property of each node.

First we are removing the old nodes and setting the node value to the new nodes data. Next, we want each node to be a circle with radius 7 (that's just a random value which seemed quite okay to me). After that, we want each node to be colored depending on the cluster it belongs to. We have previously created a map of colors called clusterColors. When new cluster appears, a new key value pair is created in the map, where key is the cluster number and value is a randomly generated color. If the cluster of the node already exists, then the color of the node will be the value of that cluster key in the clusterColors map. Then if we want to see usernames on hover, we need mouseover, mousemove and mouseout events. In the next line, we are calling the drag() method which allows us to drag the nodes. At the end, new nodes are being merged with the old ones with the merge() method. We will add the links between the nodes in a similar manner. All that's left to do is to create the simulation on updated nodes and links.

Here we are creating the force between the nodes and links, where each link has an unique id which we created by adding the attribute id .attr('id', (d) => d.source.id + '-' + d.target.id) to each link. That id is created from the id's of the nodes the certain link is connecting. Collide force is there so that the nodes are not overlapping, considering the size of their radius. Here we have set the radius to size 20, which is larger than 7 - the radius of the nodes. Charge force is causing the nodes in the graph to repel each other, that is, it prevents the nodes from overlapping each other in the visualization. In the end, we have a center force, which is forcing the nodes and links to appear at the middle of the svg.

And how this actually looks? Check out the GIF below for the preview, and if you want to start the app all by yourself, follow the instructions at the README in the repository.

The PageRank visualization code is similar, the notable difference is in the radius of each node and the color of the nodes.

You can see that the attribute r is proportional to rank (calculated PageRank of each node). Also, the fill attribute is determined by the gradient created in the defineGradient() method.

There is still a lot left to learn regarding the React, D3.js and WebSocket, but creating this demo application gave me a pretty good insight into the real-time visualization. It was fun playing with it, and I'm looking forward to learning more in the future. Also, I would like to emphasize that Reddit network explorer application, developed by my colleagues Ivan, David and Antonio, helped me a lot. There, you can find real-time visualization with frontend in Angular. For any feedback or questions ping me or Memgraph team at our Discord server.

If you like Memgraph, visit our GitHub and become our Stargazer! 🙌

Once suspended, memgraph will not be able to comment or publish posts until their suspension is removed.

Once unsuspended, memgraph will be able to comment and publish posts again.

Once unpublished, all posts by memgraph will become hidden and only accessible to themselves.

If memgraph is not suspended, they can still re-publish their posts from their dashboard.

Once unpublished, this post will become invisible to the public and only accessible to Katarina Supe.

Thanks for keeping DEV Community 👩‍💻👨‍💻 safe. Here is what you can do to flag memgraph:

Unflagging memgraph will restore default visibility to their posts.