Hi, in this article, I am going to create a portable bsd operating system, nomadBSD. It's quite useful and have a simple usage. Let's dive the content.

BSD is a high dimensional system. FreeBSD uses about 40GB while noamdBSD needs about 5GB or more in workspace.This system is also based on FreeBSD,however, as a result of improvements and changes, nomadBSD, a portable "persistent" and low-size bsd distribution, has emerged.

nomadBSD is a minimal operating system that can be used as a live-system, "persistent" and ready to use directly with installation, automatically detecting hardware. 1.2GHz CPU speed and 1G of RAM are recommended as basic requirements. Although it is not very performance for usb-2.0, it can be used much more easily with usb-3.0 and above technologies. It was a very pale expectation to expect performance from an operating system that is already persistent and carried on usb. You can boot by selecting your own USB from the boot menu of any machine, and the operating system recognizes the hardware and initiates the system boot process.

Here, it is explained how to open the archive and how to write the image to the USB memory according to different operating systems. It can simply be written to a usb stick using the dd tool on any operating system.

Then you can customize the system with the setup wizard and install it on the usb. Disk encryption feature can be activated optionally during installation. During boot, it waits for you to enter the password you set to connect the disk and continues the boot process after matching.The system is a persistent system. At the first startup, the installation takes place with the installation wizard, and when the system is restarted, many software that may be needed for daily use such as browser, text-editor, ftp client, a simple code editor, mail client will appear pre-installed.Since the system is based on freeBSD, the package manager is pkg. With this command, the system can be updated, the desired package can be installed and removed. The system uses Openbox as the window manager. The lightness and speed of this system is a chosen detail.In addition, as seen here, window managers or desktop environments used in linux systems can also work with BSD. When you want to install FreeBSD, you can install without a window manager, then you can install desktop environments such as xfce4, kde, gnome in the pkg repo.

Installation and review on Oracle Virtualbox

If you want to use it by creating a virtual machine on Oracle VirtualBox, there is a dedicated section in the NomadBSD manual for this. img extension archive is converted into a virtual disk with vdi extension with VBoxManager.

Then the disk size can be adjusted again with the same tool.

Then, after creating a new machine on VirtualBox and making the necessary system settings, this vdi virtual hard disk can be connected to the machine.
At the first startup, the installation wizard welcomes us. Nothing is visible except the wizard.Do not close the window. otherwise you may have to restart the system. 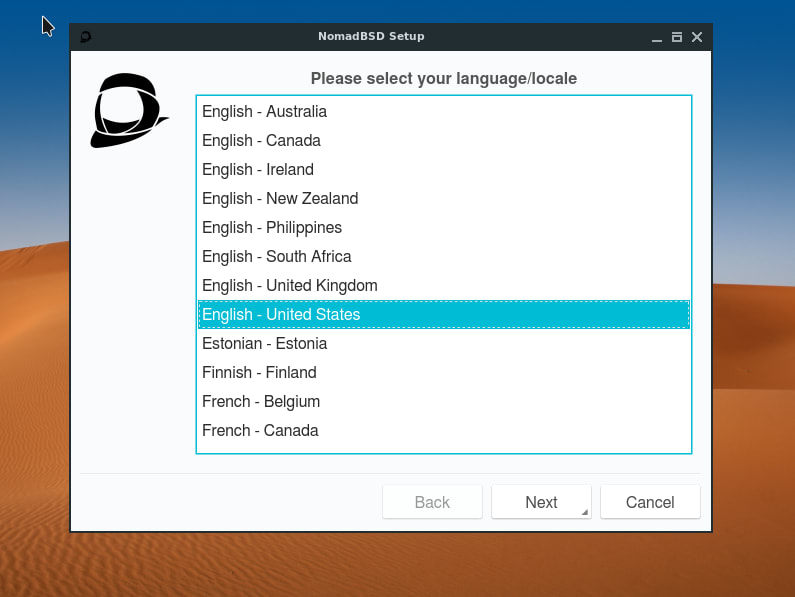 Language and keyboard layout selection is made. It prompts again to add a second keyboard layout. You can skip adding.
After the timezone selection, the root password is determined. Username is preset as nomad. 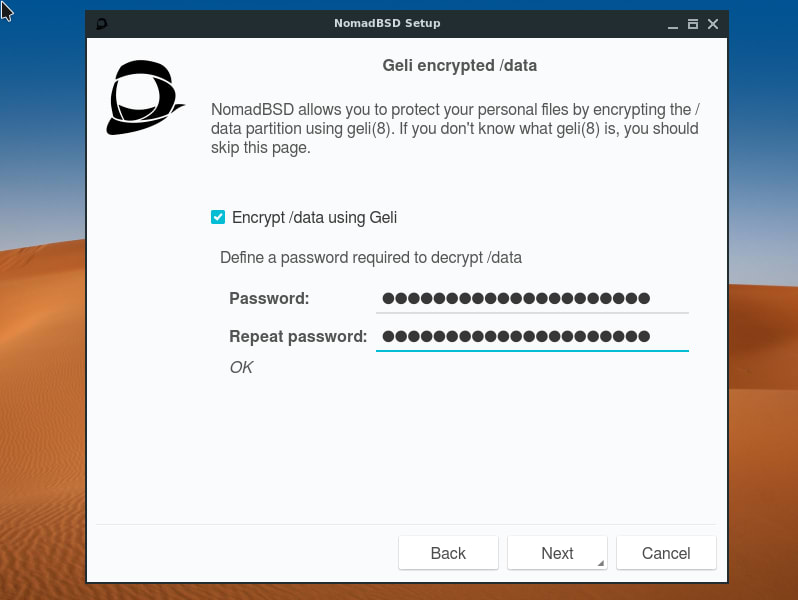 You can encrypt the disk with the block encryption option with Geli. You need to set a password for this. This password is used before connecting the disk during boot.

Then the applications and shell to be used by default are selected. In summary, the actions to be taken are examined and the system setup is started by pressing the "Commit" button. The installation process is completed quickly. When we restart, boot is started by selecting multiple users. 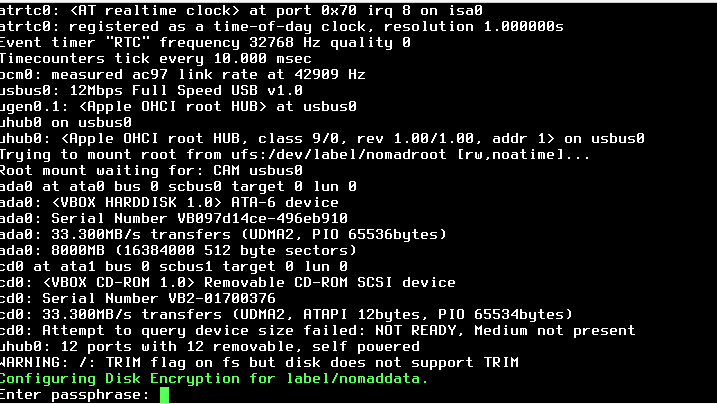 Geli password is entered for disk encryption and disk binding is performed.
If you are using a USB memory stick after the system is turned on, you can make the network connection from the icon in the upper right. 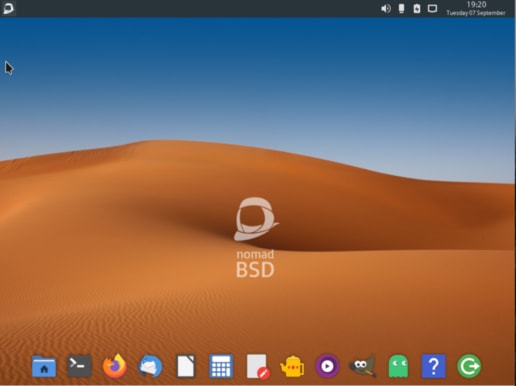 Many packages that may be needed for daily use come preloaded. Many toolkits such as visual editor, office suite, mail client, a package manager with visual interface, firewall come pre-installed. You can install many packages with the pkg package manager. For example, neofetch package was installed from pkg package repositories below and dangereous from ohmyfish themes was used in fish shell. 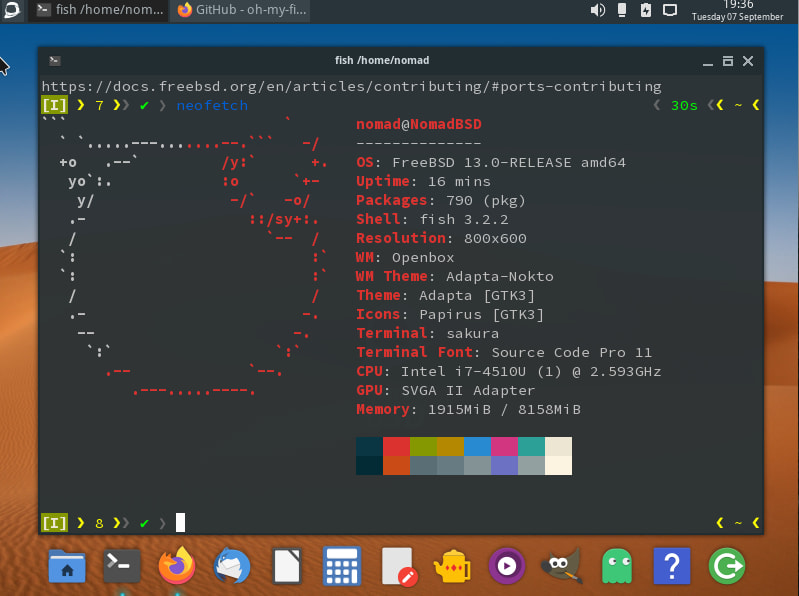 Like all BSD systems, this is a very similar system to the GNU/Linux distributions that the average linux user can easily get used to. The system is especially configured so that even beginner users can use it easily. For example, you can perform package update, deletion and installation operations with OctoPkg graphical package manager. Here you can uninstall apps that come pre-installed but you think you won't be using. 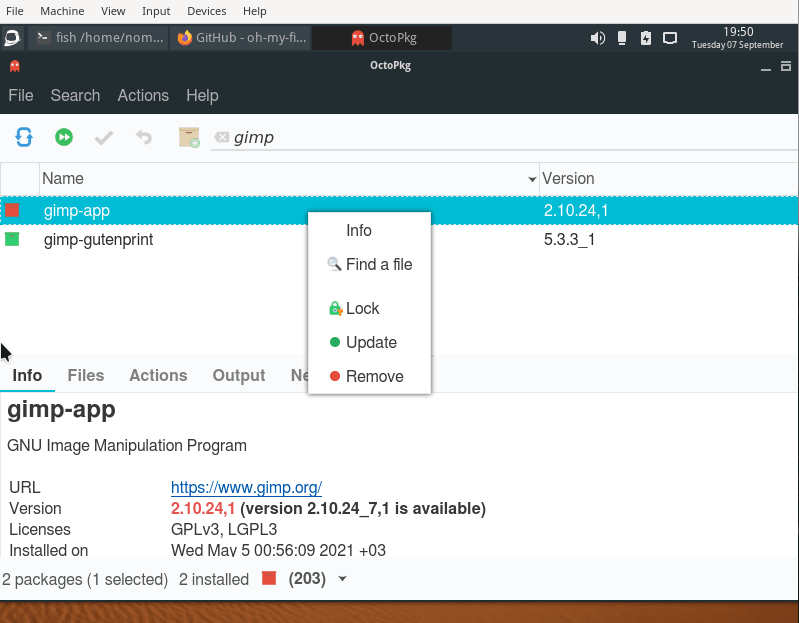 To install linux packages on NomadBSD,

You can use these commands on shell. Then you can install the linux packages in the pkg repository with the following command. 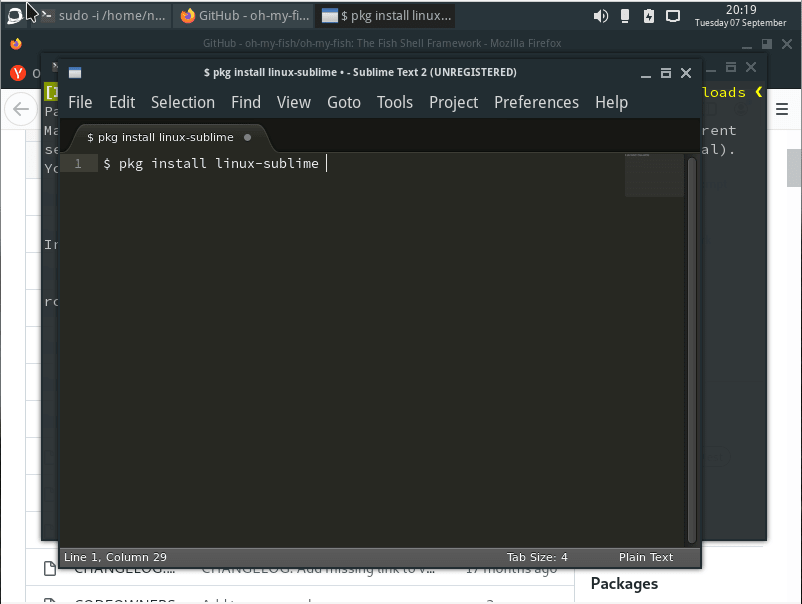 Tools and databases such as Java, docker, vagrant, mongodb, elasticsearch are also available in freeBSD repositories. It can be easily installed using the pkg package manager. It is also possible to install this system on disk. But for me, a freeBSD installation would be much more convenient for a workstation or a personal desktop computer. This system is a stable and freeBSD-powered operating system designed as a lightweight alternative. For this reason, if heavy work needs to be done, a freeBSD desktop would be a more appropriate and less tiring choice.

For those who want to switch to the BSD side with this distribution, I recommend that they start with GhostBSD first. They can then switch to FreeBSD and OpenBSD which is famous security-oriented operating system. This sorting will greatly reduce the feeling of unfamiliarity in the transition process.

Node.js vs Golang: Which Is Best for Your Project?

How to type hex colors in typescript ?

Once suspended, nuhyurdev will not be able to comment or publish posts until their suspension is removed.

Once unsuspended, nuhyurdev will be able to comment and publish posts again.

Once unpublished, all posts by nuhyurdev will become hidden and only accessible to themselves.

If nuhyurdev is not suspended, they can still re-publish their posts from their dashboard.

Once unpublished, this post will become invisible to the public and only accessible to nuh yurduseven.

Thanks for keeping DEV Community 👩‍💻👨‍💻 safe. Here is what you can do to flag nuhyurdev:

Unflagging nuhyurdev will restore default visibility to their posts.