ksqlDB is a pretty cool event streaming platform. A few commands allow you to build a detailed real-time stream processing application. Capture, transform and perform continuous transformations on Kafka with a simplified SQL dialect. In addition, ksqlDB allows you to capture events from an external system using Kafka connect.

In my previous blog classifying socks with deep learning I described deploying an object recognition model on AWS DeepLens hardware for identifying socks. Let’s now look at how Kafka plus ksqlDB can retrieve sock classification messages from the camera and perform time-window stream transformations to find pairs of matching socks. 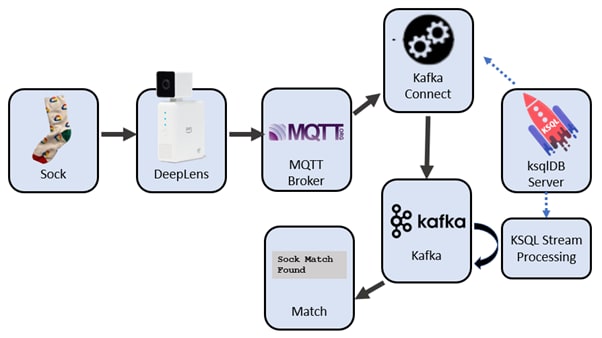 Kafka and ksqlDB for a streaming platform to pair socks

The first task is to pull sock predictions from the DeepLens camera. The images classified by the camera are placed onto an MQTT topic.

MQTT is lightweight TCP/IP messaging protocol perfect for small mobile devices and low powered sensors. It allows for short efficient messages. It’s closer to a notice board than a queue, and allows for lightweight messages like “Sock seen is Google, with a 98% confidence”.

We can peek at MQTT messages with mosquitto_sub(or the terrific GUI tool MQTT.fx). Here’s a typical sequence listing the MQTT topic sockfound

MQTT to Kafka with Kafka Connect

We want to add recognised socks into the Kafka stream processor. MQTT acts like a key/value store, whereas Kafka is a complete streaming platform. Getting MQTT messages into Kafka is easily achieved with the Kafka Connect framework. With an MQTT driver added to Kafka Connect, we can configure a source connector to constantly place new prediction events from MQTT into a Kafka topic.

The traditional way of configuring Kafka connect (which I used in Race tracking with Kafka KSQL, MQTT & Kibana) was to use curl to interact directly against the Kafka Connect service. Although this works, there is now a much easier way …

ksqlDB now has commands so you can directly setup and control Kafka Connect. Let’s see how we can configure an MQTT source using only ksqlDB 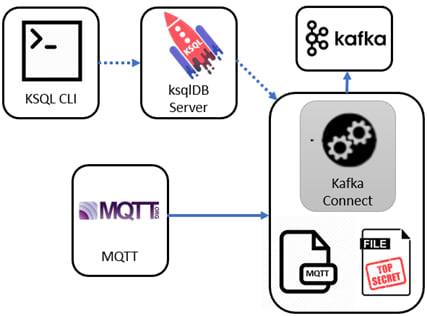 We can create the Kafka Connect source to MQTT with a ksqlDB command like this. Note I’m describing the location and credentials for the MQTT broker plus the name of my destination Kafka topic, and .. that’s about it

By the way — if you’re worried about putting secrets (like passwords) into your KSQL script have a look at Kafka Connect Secrets Management with ksqlDB.

The DeepLens image classifier works pretty quickly— and I can get 3 or 4 images recognised each second. But not all image classifications are correct. Have a look at this stream (note the time is HH:MM:SS). Within the 4 second span of 18:10:51 to 18:10:55 I saw messages indicating “blank”, a single “Mongo” message, 9 sequential “Google” messages, another single “Mongo” message a finally a sequence of “blank” 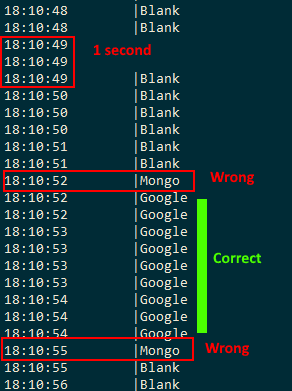 Time series — what should be expected for sock image identification

My second problem was a little silly. I need a way of finding not only the differences between socks — but finding when I had no sock! As I wanted to count socks I needed to exclude the “blank” images.

Now we’ve got a steady steam of identified socks — we now need to find pairs of identical images. To find pairs of socks I’ll look for socks appearing in even numbers. Here’s a sample segment of KSQL

Well — yes. I was super thrilled with the result. There was a bit of latency between the image recognition and the pair identification which I hope to still optimise. But overall, very happy with this project.

Do you have socks to pair? Have a look at the complete project code at : https://github.com/saubury/socksort

Connect your Java application with any SQL databases

HOW TO BUILD AN IMPRESSIVE PYTHON DEVELOPER RESUME AS A COLLEGE STUDENT?

Getting control of a codebase