If you are reading this article I can assume that you are a software developer, you have probably both heard the term “refactoring” and applied it yourself (conscious or not) several times while coding. To begin, let's review the definition:

Refactoring (noun):
A change made to the internal structure of software to make it easier to understand and cheaper to modify without changing its observable behavior.

I became interested in the topic in my early years as a developer when I was asked to refactor a piece of code that had plenty of opportunities for improvement. It was a very long method with several steps that performed different things, even with multiple responsibilities.

My first approach to this code refactoring was to apply the “Extract Method” multiple times to that long method, giving those extracted the most representative names that I could find, for them, and for the parameters. When I finished doing that, I felt that the code was much better and that I had accomplished the task I was assigned.

Then I presented it to the architect of the project, and he instantly noticed that my refactoring skills were similar to my guitar-playing skills (FYI: I don't play guitar, I just play air guitar). As any good mentor should do, he saw an opportunity for me to improve, so we paired up, and had about 3 different 1-2 hours long working sessions, designing a new solution together, applying some design patterns here and there.

After reaching a much better solution than the original, I really liked what we had done, and I saw a lot of potential in this technique. A code that already worked, now was much easier to understand and modify when needed.

Last year, I felt that I definitely could keep improving my skills, so after searching for book recommendations, I found one very well known: "Refactoring" by Martin Fowler. After reading it, I can understand why it's so often recommended. This topic I became interested long ago, now made much more sense to me.

For those interested in the origin of things, refactoring wasn’t invented by Martin Fowler as some people might think. He shared that he learned this technique from Kent Beck and a group of developers of a community of Smalltalk language back in the 90s, and during that time there were just a few articles and thesis about refactoring, but there were no books.

So, enough introduction, this is about what I learned from that book.

1) WHY IS REFACTORING IMPORTANT?

Maybe the most important question to ask yourself before doing anything, is why should you do it, meaning what value does it give in return.

These are some of the main reasons why doing refactoring is recommended:

2) WHEN TO DO REFACTORING?

Refactoring isn't a special task that will show up in a project plan, so when should you do it?

Conclusion: Refactoring is a part of day-to-day programming 📆

Probably you’ve heard about code smells, and for sure you have already seen tons of them. Let’s see their characteristics.

Below is an example written in Ruby (it should be simple enough for anyone to follow). Don't look at the image yet! I know the gray boxes already grab much attention, just cover them with your hand and look at the code for no more than 10 seconds, thinking of the code smells that you can find. Then uncover the boxes. 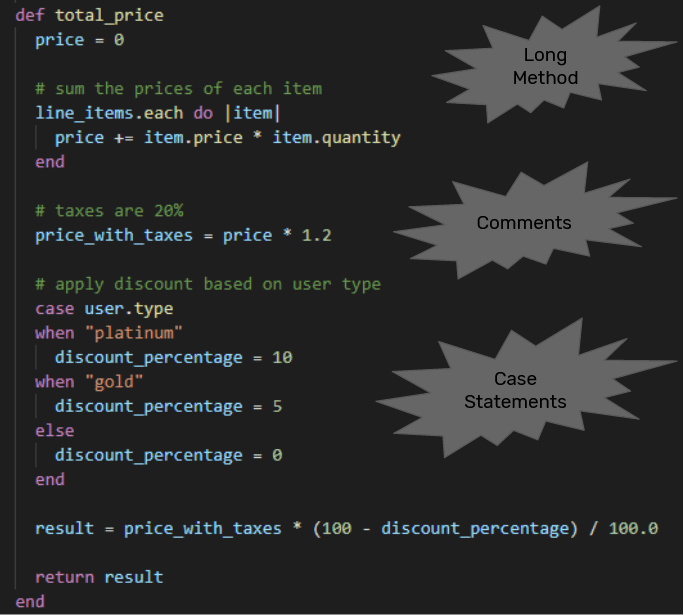 I’m quite sure that in that amount of time you could find the same code smells (or even more). What I’m trying to show, is exactly what code smells are, they are something very quick to spot, and they are not a problem by themselves (think that this code works perfectly fine).

Here you can find a catalog of code smells, defined mainly by Martin Fowler and Kent Beck.

I highly recommend reading, understanding, and memorizing them. If you do, whenever you are doing code review to another person, or just reviewing your code, you will see much more easily the possible improvements.

Conclusion: Pay attention to code smells. They might be whispering (or even shouting!) asking for a better solution ⚠️ 👀

By definition, refactoring is the process of changing the code structure, without altering its behavior.

You may be asking other things like whether it's better to have more unit tests or integration tests, or if it's necessary to have near 100% code coverage on tests.

As a short answer, take this quote from Dijkstra: "Program testing can be used to show the presence of bugs, but never to show their absence." It means that there is no specific technique or condition to be met, in order to be sure that your program works exactly as expected without any errors.

So test the way you prefer, and try to cover as much as possible without adding unnecessary duplicated tests. Keep in mind that this will allow you to apply refactoring with much more confidence.

Conclusion: Having tests is a precondition for refactoring, unless you want to take the risk of breaking things 🐛

5) MECHANICS OF A REFACTORING

After this long introduction, we are finally reaching the part where I present a couple of examples. Before doing that, I would like to mention that the refactorings as described by Martin Fowler in his book, they have a format, and they have a mechanics.

Format of a refactoring:

Mechanics of a refactoring:

In the book they are presented within 6 different categories which may not be worth it to explain them in this article. Here you can find a catalog of refactorings.

Conclusion: There is no conclusion here 😅

If you read up to here, first thank you, and second, now you have to finish it.

I will present just 2 simple refactorings as examples. I don’t think the purpose of this article should be for you to learn many of them or learning some complex ones. I believe that is something you can learn by yourself somewhere else, but you will do it only if you feel enough motivation to do it.

First Example - Decompose Conditional Expression:
You have a complicated conditional (if-then-else) statement.
→ Extract methods from the condition, “then” part, and “else” part. 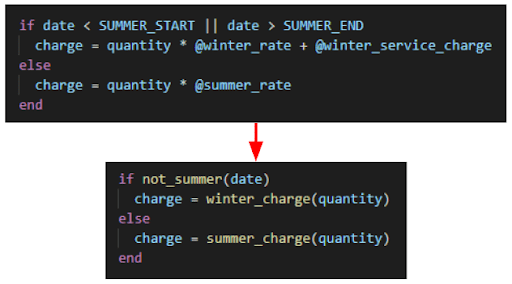 Second Example - Extract Class:
You have one class doing work that should be done by two.
→ Create a new class and move the relevant fields and methods from the old class into the new class. 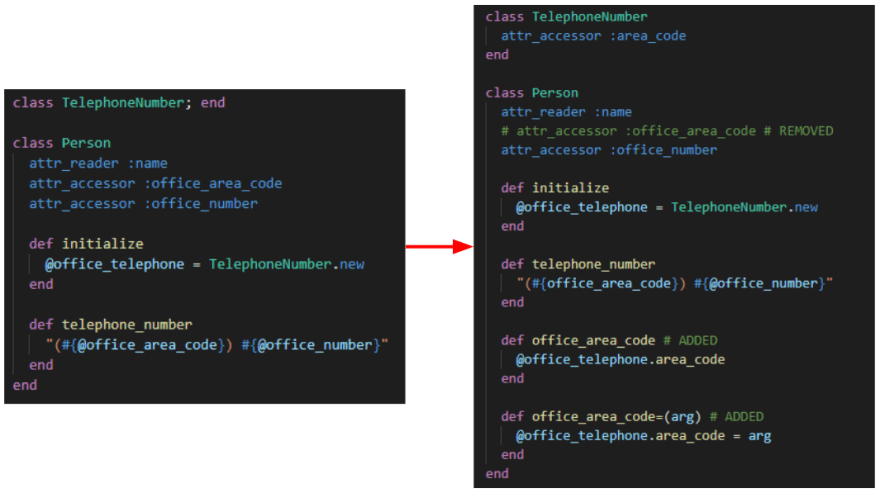 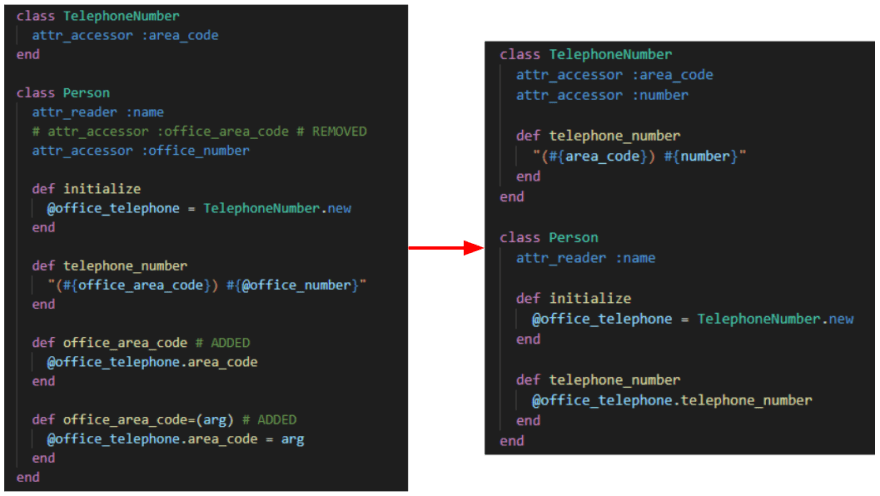 In my own experience as a software engineer, I have seen many projects grow a lot over time, and as a result, their code became harder to understand, harder to maintain, harder to work with, and more prone to introducing bugs. And I know for as long as I work in this industry, I will continue to see this happen.

There is no magic trick for that. However, so far I have also seen that refactoring the code as part of your daily programming, is probably the best technique you and your team can apply to counter those undesired effects.

Give it a chance, and practice it until it just becomes a habit. I can assure you that you will experience the benefits of it.

How to improve your code: tips and reflections

Sebastian Herrera
I built a React app generator.
#react #news #productivity #javascript
What was your win this week?
#discuss #weeklyretro
What are the most annoying things in the work of a developer?
#career #productivity #webdev
Forem Open with the Forem app