Ok, what do we have here. It's the new entrant and yet very promising project Solpad.

They offer 3 major services as shown below, let's take a look at each of them. 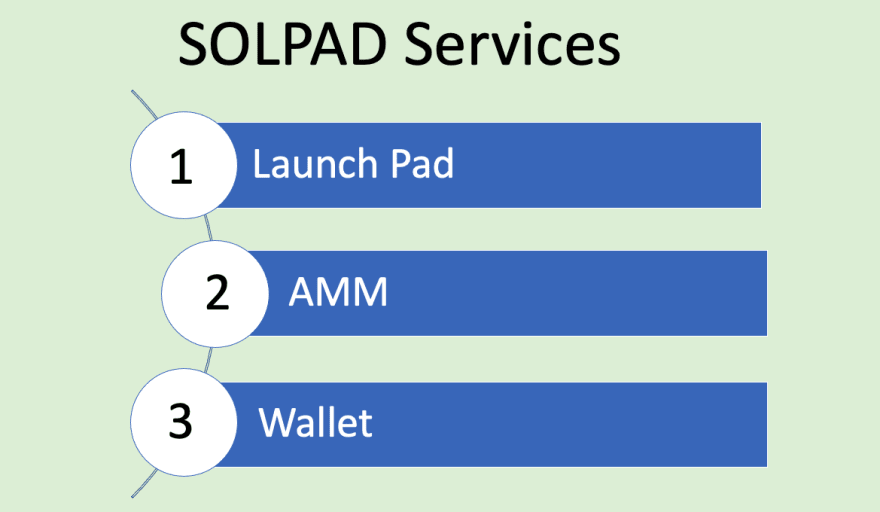 There are a number of launch pads these days and yet Solpad is something that's interesting to watch out for. Why? read below

48 tokens will be allocated to the whales' pool. To be a part of the whales pool you must have at least 280,000 PAD (solpad tokens).

Take a look at the various tiers that are available.

No matter how many whales are there the maximum that they can get is 48 and the distribution is amongst the whales not the ones in other tiers.

Of course, they can be part of the other pools too, but hey! at least we are given a fair chance.

Maybe the shrimp pool will be crowded. Crabs can have less than whales, anything can happen.

You formulate your own strategy to give yourself the best chance.

Everybody gets a chance is all I am trying to say.

Solpad is built on Solana but its wings spread far and white to even other blockchain ecosystems.

Needless to say, they are no one-trick pony!

Currently supported: Solana
In the near future: BSC and Ethereum

The number of blockchains that they will support will constantly increase.

You can get more data from this official link 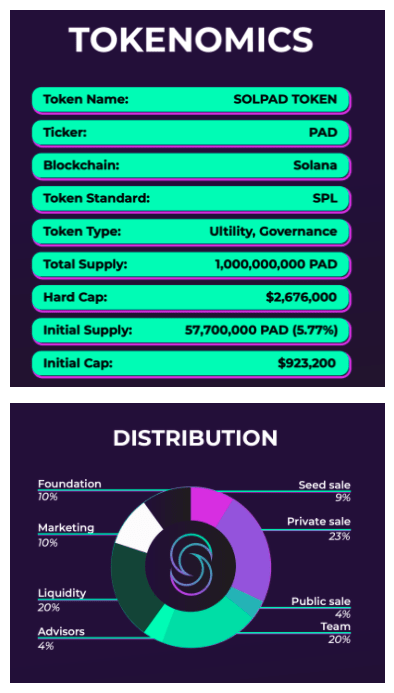 The initial liquidity will start at 57.7M PAD tokens and from then on it will increase based on the schedule published here

We have depicted our understanding below

What makes Solpad stand out from the rest of the fundraising platforms is the token utility.

PAD token holders apart from being able to participate in the ICO's based on the number of tokens held can also vote in the DAO with the tokens.

This gives PAD token holders the ability to decide how the platform moves forward like deciding the number of tokens needed for tiers, which IDO's will be conducted in the platform by voting in the governance proposals.

The next obvious question is after I buy tokens on Solpad how can we trade the tokens. Let's take a look

Let's say you have participated in the IDO sale for project Y from the Solpad IDO.

Usually to trade them you will have to wait until the tokens are listed on exchanges or on decentralized exchanges like Uniswap and wait for the teams to provide sufficient liquidity to be able to trade them. But in Solpad its different

This is where SOLSWAP comes in.

SOLSWAP is the multichain DEX and will connect between Solana and other platforms. Projects which conduct their IDO on Solpad will be instantly listed on SOLSWAP.

This means you will be able to trade instantly on SOLSWAP

Solswap will also act as a bridge between different blockchains for example between the Solana and BSC chain where the tokens can be instantly swapped between the chains and solswap will take care of the burning the tokens in one chain and minting them in another to maintain the total supply constant.

Liquidity mining is one of the major components of the Defi space but it comes with its own risk called Impermenant loss.

To put it in a few words Impermanent loss happens when you provide liquidity to a liquidity pool, and the price of your deposited assets changes compared to when you deposited them.

So to protect token holders from Impermanent loss, liquidity providers of PAD tokens will be rewarded with PAD tokens so they don't lose tokens in case of price appreciation of PAD.

This provides a good incentive for token holders to provide liquidity

Sol wallet will allow storing tokens belonging to multiple tokens in the same wallet. Not only storing them but you can also swap the tokens between chains using the swap that will be implemented in the SOl wallet.

ONE WALLET TO STORE THEM ALL

Below are some of the features offered

There is an impressive list of investors who have backed this project big time. Here are a few

Building a CI Server with TeamCity

Once suspended, simplystaking will not be able to comment or publish posts until their suspension is removed.

Once unsuspended, simplystaking will be able to comment and publish posts again.

Once unpublished, all posts by simplystaking will become hidden and only accessible to themselves.

If simplystaking is not suspended, they can still re-publish their posts from their dashboard.

Once unpublished, this post will become invisible to the public and only accessible to Staking7pc.

Thanks for keeping DEV Community 👩‍💻👨‍💻 safe. Here is what you can do to flag simplystaking:

Unflagging simplystaking will restore default visibility to their posts.