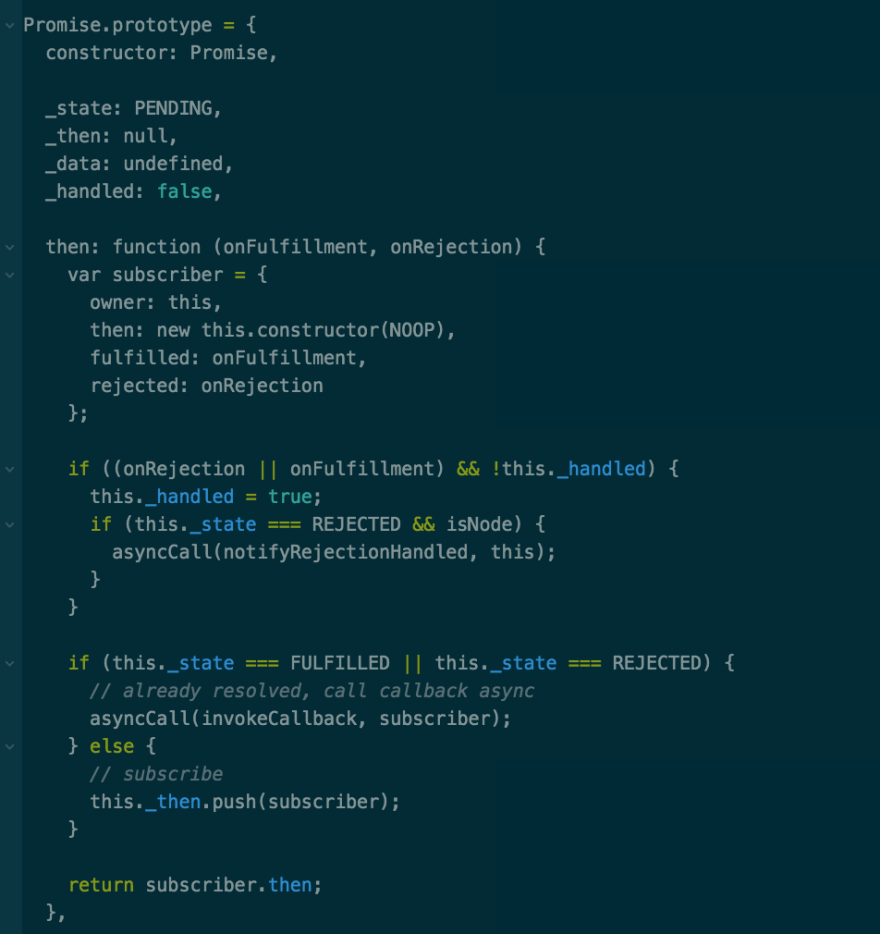 The Promise object represents the eventual completion (or failure) of an asynchronous operation and its resulting value.

Put simply[1], it is a means to reorganize asynchronous (concurrently executing) code to reduce nesting among other reasons.

Over the next couple of posts, I'm going to give a brief primer on what a promise is and how to use it but the main purpose of this article is to understand how a Promise library is implemented. I was poking through the source code of Pinkie not too long ago and it seemed like a great article candidate.

Without going into too much detail, they are used to avoid "Callback Hell" as well as create a more familiar code-flow (the try/catch). pattern. Here's a contrived but pseudo real-world example:

A promise allows us to restructure the code as such as this:

There appears to be more code in the later version because, I suppose, there is. The use of a promise doesn't reduce code. It makes the flow more obvious. And I do believe that is achieved here. You now see the order of execution more clearly. Each then statement must be completed before the previous then statement and should an error occur, the catch(function(er){}) will intercede to allow you to handle the error gracefully.

Promises in JavaScript has become quite ubiquitous. Should you want to see more examples or practical uses of Promises, the pg-promise library has excellent up-to-date examples that are both clear and real-world. The library itself is a PostgreSQL interface for Node.

In the next post, we'll look at how promise libraries are implemented by dissecting the implementation by Floatdrop called Pinkie. A small ES2015 Promise implementation.

Once suspended, theopensourceu will not be able to comment or publish posts until their suspension is removed.

Once unsuspended, theopensourceu will be able to comment and publish posts again.

Once unpublished, all posts by theopensourceu will become hidden and only accessible to themselves.

If theopensourceu is not suspended, they can still re-publish their posts from their dashboard.

Once unpublished, this post will become invisible to the public and only accessible to Frank@theOpenSourceU.org.

Thanks for keeping DEV Community safe. Here is what you can do to flag theopensourceu:

Unflagging theopensourceu will restore default visibility to their posts.