Let's assume you have a web application that's running on multiple servers. To help speed up queries, you add a cache to store data accessed often by your application. Before calling the database for a piece of information, you first check if it exists in the cache. As you gain more users, one cache instance is too small to provide a significant performance boost. In this case, you add more cache instances to your server to cache more information.

But now, you have to check every cache instance to see if it contains a key. It would be easier if you knew which cache instance has the key beforehand.

Consistent hashing works by imagining a circle. Each key and cache instance is assigned a corresponding point on this circle. To determine which cache instance to add a key to, we map the key to the closest cache on the circle going in a clockwise direction. 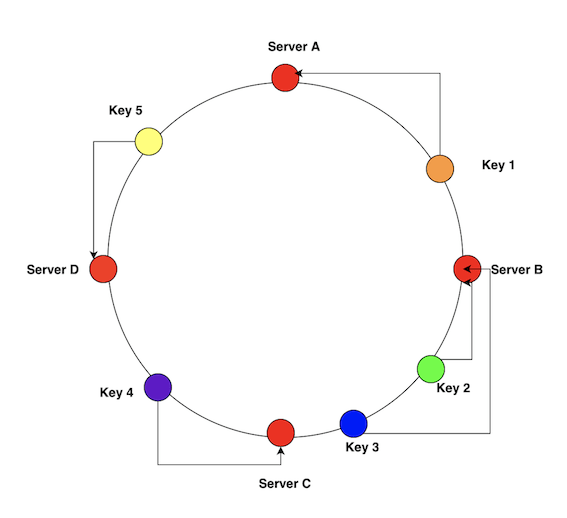 Programmatically, consistent hashing is simple to implement. We map each of our cache servers to some integer using a hash function. Here, the hash represents the point on the circle for the cache.

In the code above, we keep track of the mapping of hashes to nodes in hash_to_node.

In closest_node_hash(key), we sort the cache instance hashes. Then we do a binary search (bsearch) to find the integer with a value greater than our hashed key.

If a value is not found, we return the first cache in the list. This emulates a circle since we "wrap" around to the beginning of the list.

Once we have the hash that is greater than the key, we get the corresponding cache instance. This is the cache we should add the key to.

We now have a consistent way to map our keys to cache instances.

Now let's test what happens when you add or remove a cache instance. Let's run this code on a set of keys to see what the mapping looks like:

As you can see, the keys are distributed among the three cache instances.

Now, let's add a node to our list and run it again.

When we add a server, only a small subset of keys get remapped to the new instance. Thus, only a small subset of keys will experience a cache miss as they get moved to a new cache. This is because the mapping depends on which node is "closest" to the key. When you add a new server, the closest server does not change for most keys. Thus the mapping for most of the keys remains consistent.

Now, let's remove server:B from the list and see what happens.

Only keys that mapped to server:B need to be remapped. All the other keys remain the same as their "closest" server has not changed.

As you can see, consistent hashing makes scaling our cache instances easier. Cache instances can be added and removed without having to remap all the keys.

I used caches in this blog post for a practical application of this hashing strategy. However, consistent hashing can be applied anytime you want to divide a set of keys across multiple nodes. For example, in peer-to-peer networks or a load balancer. My favorite part of learning about consistent hashing was seeing how a hash table can be modified to work in a more distributed way.

You can find the complete implementation of the consistent hashing code on Github.

Advent of Code (in MiniScript), Day 4

Once suspended, veerpalb will not be able to comment or publish posts until their suspension is removed.

Once unsuspended, veerpalb will be able to comment and publish posts again.

Once unpublished, all posts by veerpalb will become hidden and only accessible to themselves.

If veerpalb is not suspended, they can still re-publish their posts from their dashboard.

Once unpublished, this post will become invisible to the public and only accessible to Veerpal.

Thanks for keeping DEV Community 👩‍💻👨‍💻 safe. Here is what you can do to flag veerpalb:

Unflagging veerpalb will restore default visibility to their posts.