Previously, we learnt about how do we validate the MZ signature, which tells us that the file is very likely, a Portable Executable (PE) file. or a MS DOS Executable.

Now, lets proceed to navigate to another structure within the PE called the NT_HEADERS aka PE HEADERS.

The NT_HEADERS consist of 3 main subsections. 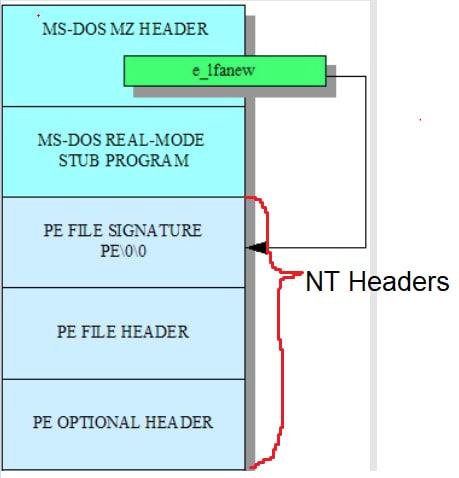 Today we will validate the NT Signature.

Continuing with our previous article, let's relook at the PE image above and the definition of the IMAGE_DOS_HEADER.

We can see that there is a property e_lfanew. It contains a Relative Virtual Address (RVA) whose offset leads us to the PIMAGE_NT_HEADER.

e_lfanew simply means the long file address of the new executable header , kinda saying the IMAGE_DOS_HEADER is old as its for MS-DOS.

The code below shows how to do that.

Let's break it down.

As imageDosHeader is of a type pointer to IMAGE_DOS_HEADER, we cant do pointer arithmetic byte-wise. Meaning we want to shift the pointer byte by byte as the RVA is the offset in bytes.

Hence we casted it to a (unsigned char*) which allows the pointer to move byte by byte as a char is 1 byte.

Next we moved the pointer by imageDosHeader->e_lfanew number of bytes.

Now we can easily get our signature from PIMAGE_NT_HEADERS and compare it with the macro IMAGE_NT_SIGNATURE.

IMAGE_NT_SIGNATURE is a macro found in winnt.h which defines the PE signature to be PE\0\0 which ends with 2 null bytes.

Hence overall, our code would look like the following.

I did not expect my antivirus to catch up very quickly that what I am trying to do might be suspicious. Many malwares have similar type of function calls to perform DLL Injection. We might discuss that in the future.

I have temporarily disabled it.

In this exercise, I learnt how to navigate from the DOS HEADER to the PE HEADER via the e_lfanew property. Following that, I successfully verfied the PE Header. Interestingly, we also saw my Antivirus going off and suspecting my code to be malicious.

The 7 assumptions about strings you probably have

7 things you should know about CYBERSECURITY for 2022