Once upon a time, about three years ago, I had a great idea; I wanted to implement an auto-deployment infrastructure across a bunch of servers that I was running. When a commit was pushed into GitLab/GitHub, if the branch that received the commit was deployed on one of the servers that I was managing, the repository on that server should pull the changes, and then optionally there would be a post-update hook that could be invoked to complete the local deployment.

The deploy hooks for both GitLab and GitHub attach the repository URL to the payload, so what I decided that I needed was a simple way to drop a database onto a given system that could track the git repositories on that system. Ideally, it would be something fast, and something simple enough that it did not require any real ongoing management or resources.

Enter git-index. This is a simple Ruby app that maintains a local SQLite database of git repositories, providing a command-line interface to add, list, query, or remove entries.

One of the things that I like about Crystal is that as a compiled language, one can build single binaries for utilities without depending on having the entire installed language at one's disposal. I figured that it might be an interesting exercise to take an hour or two to translate git-index from Ruby to Crystal.

Crystal has a Ruby-inspired syntax, and on a small scale, a lot of Ruby code is also valid Crystal, but there are some notable differences.

One of the first things that one will encounter when porting Ruby to Crystal is how typing changes the way empty arrays and hashes are declared. In Ruby, one does a simple assignment:

This will result in an error in Crystal, however:

Fortunately, the exception is clear about the problem, and the solution:

The implementation of this change is basically identical to how one would do it in Ruby, so I won't go into details there, but there is an important detail to consider in regard to instance variables.

Failing to do so may reward one with the following type of error:

In the Ruby version of the code, the following was a fine way to initialize an instance variable for the first time:

In Crystal, that initialization must occur earlier.

There are a few different options. One is to specify the typing information of the instance variable at the class level:

That works great and has the advantage that the instance variables that exist in the object definition are all clearly visible. And because the initialization can occur at the class level, there isn't even a need to provide an #initialize method.

There is an alternative, where the initialization is done in the argument specification of the #initialize method. The actual initialization code only differs from the code above by where it is placed:

This approach combines the argument specification for the constructor with assignment to the instance variable. I like this approach because it allows the code to have a default configuration handling path, but it also allows someone to circumvent that and to provide a Config instance themselves just by changing the location of the initialization.

The only other significant stumbling block to porting this utility to Crystal was porting the code that interacts with the database.

Ruby has a variety of different gems that can be used for database access, with varying levels of abstraction from gems that offer direct low level access to a database, to gems which offer a high level ORM, like ActiveRecord or Sequel, and which typically implement their own mid level abstraction layer.

In the original code, I used the SQLite3 gem directly, which offers a simple API. After creating an instance of the class, one can use #execute to run SQL and to perform queries in general.

Also, because of the very dynamic nature of Ruby, the return set of a database query can be iterated over simply as a set of arrays. Because Crystal is typed, however, and Arrays have to be typed, there is a little more work that has to be done on the Crystal side. So, as an example, this code in the Ruby version:

The Crystal is a little more verbose for two reasons. First, a query returns a result set that must itself be iterated over to access each of the rows in the result set, and second, each field must be read with typing information provided. Similar changes have to be made in each of the methods that queried data from the database.

You can access the source code, or download a prebuilt Linux x86_64 binary via the GitHub project:

If you have Crystal installed locally, you can build it: 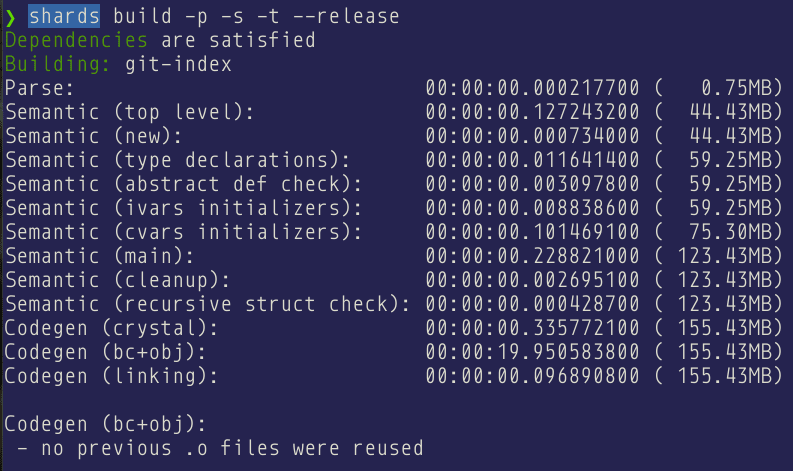 While the runtime resource usage of a CLI tool like this isn't super important, it is interesting to illustrate the difference between the Ruby version and the nearly identical Crystal version.

On a real server with 53 indexed repositories, the Ruby version's time information when executing git-index -l is:

time -v can be used to capture memory usage while running, as well:

The Crystal version, on the same machine, with the same data:

Crystal is a great language to port your Ruby CLI tools into!

I stream on Twitch for The Relicans. Stop by and follow me at https://www.twitch.tv/wyhaines, and feel free to drop in any time. In addition to whatever I happen to be working on that day, I'm always happy to field questions or to talk about anything that I may have written.

Once suspended, wyhaines will not be able to comment or publish posts until their suspension is removed.

Once unsuspended, wyhaines will be able to comment and publish posts again.

Once unpublished, all posts by wyhaines will become hidden and only accessible to themselves.

If wyhaines is not suspended, they can still re-publish their posts from their dashboard.