There’s one single thing that I find truly frustrating when dealing with multiple 3D-related software : making them exchange 3D assets.

You don’t have much warranty that what has been put out of one software will look the same into something else (e.g. a Game Engine. You may work with meters, and find out that Unreal works in centimeters. They could use different conversations for texturing, material definitions may just “not work”…)

All of this is generally dealt with a huge and horrible mess of import/export scripts. And the more of these you need to run in your toolchain, the worst it gets

Still, there are a number of file formats that are more or less standardized in this industry, but none of them does really fit all the use cases for real time rendering/video games (and by extension, VR).

Most of them are way better suited as “authoring” format: Files for 3D modeling programs, like Autodesk’s FBX or Collada from the khronos group. They are complex, and they generally are too-flexible in how they can be implemented and how they can represent a specific thing, and just contain “too much data” for what you would want to use from a programming stand point.

FBX seems to be a de-factor standard, especially in the video game industry, because of the predominance of Autodesk software as modeling animation tools. When they aren’t using 3Ds Max, they are using Maya… ! ;-)

Generally, what you would want to do is to transform theses assets into serialized binary files that can be loaded quickly into a game engine. This is generally done on a per-engine basis. For what I can tell, the general workflow of “putting thing inside Unity” generally involve putting (for example) .FBX files into the project directory, and when Unity will build your game it will convert every resources in formats optimized for the target platform.

Still, this approach of reinventing the wheel and reinventing one “transmission format” for each and every target application of 3D assets doesn’t seems to be the right thing.

In the 2D world, this problem was fixed when the whole industry basically standardized around the JPEG file format for 2D pictures. Evey single camera out there is (special cases or advanced users aside) outputting JPEG encoded and compressed image files.

Obviously, a JPEG file doesn’t have all the details that a Photoshop “project” (a PSD) file would contain, but JPEG is not intended for authoring images, it’s intended for sharing them.

What we need is a “JPEG for 3D”, and that’s exactly what the Khronos group, with an open community effort, developed, and released as the “OpenGL Transmission Format”, and version 2.0 of the specification was released in June 2017. 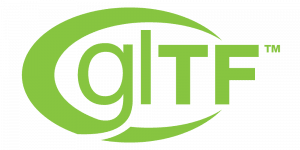 This format permit to describe 3D objects (and even whole scenes with lights and camera, and animations) in a standard format. A contrario to Collada for example, there is no room to interpretation, and not 2 ways of describing the same thing in glTF

glTF represent model data as simple binary buffer. “Accessors” permit to interpret that data contextually. This is particularly adapted to loading theses files in OpenGL, where you could load each buffer into the GPU with glBufferData, then parse each accessor with glVertexAttribPointer to bind in to the location of each vertex element you have in a buffer.

glTF is based on a simple scene graph description, written in JSON, and a number of raw resources that are the binary buffers and texture data as images.

The standard is generally easy to understand in it’s plain text, but some of the notions used are simpler to understand with some drawings. Thankfully, there’s this awesome “What the Duck is glTF?” on the official repository: 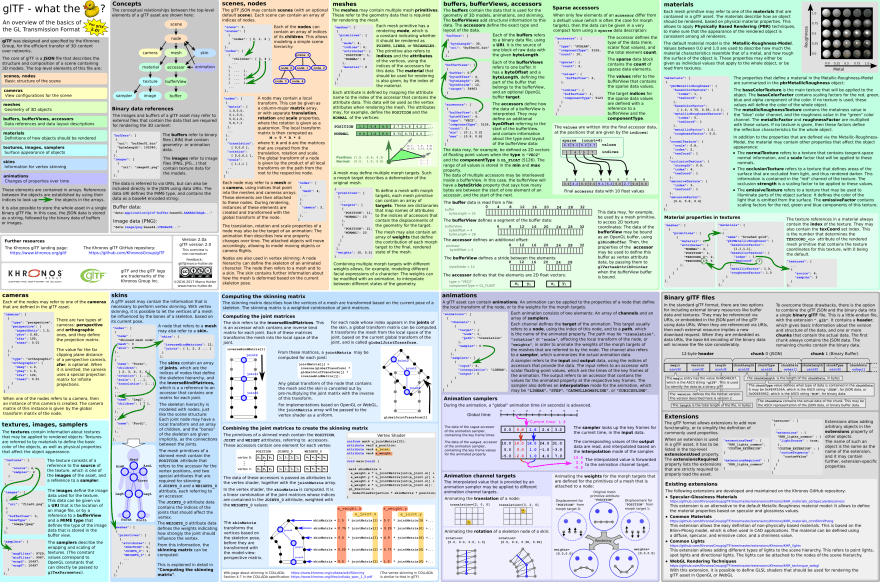 There are currently a ton of software, tools and libraries that now support glTF. and I hope they will be even more in the future.

This format is developed by the khronos group, alongside an official implementation of an exporter for blender, and it already has a lot of support form the industry

The glTF NASCAR jacked has some really imporant sponsors!

I don’t think I really need to develop more why I think every effort going towards having more support for glTF will be beneficial for the whole industry/comunity, but supporting glTF today should be your go to option.

In my next post, I will relate what it took to write a glTF import plugin in C++ for the popular open-source Ogre rendering engine. It is currently a work in progress project, but It starting to become usable, and can be found here

1B+ Downloaded Docker Images on Dockerhub