TiKV is a distributed key-value storage engine, which is based on the designs of Google Spanner, F1, and HBase. However, TiKV is much simpler to manage because it does not depend on a distributed file system.

As introduced in A Deep Dive into TiKV and How TiKV Reads and Writes, TiKV applies a 2-phase commit (2PC) algorithm inspired by Google Percolator to support distributed transactions. These two phases are Prewrite and Commit.

In this article, I'll explore the execution workflow of a TiKV request in the prewrite phase, and give a top-down description of how the prewrite request of an optimistic transaction is executed within the multiple modules of the Region leader. This information will help you clarify the resource usage of TiKV requests and learn about the related source code in TiKV. 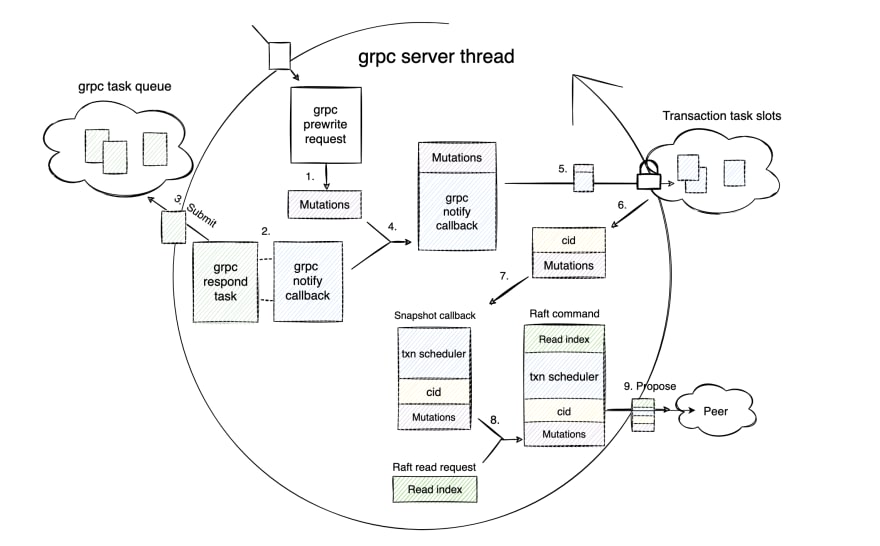 It may not be easy to understand just by looking at the figure, so below I will describe exactly what the gRPC thread does step by step. The number of each step links to the corresponding source code:

The gRPC thread has completed its mission. The rest of the story will continue in the raftstore thread.

Before I introduce this phase, I'd like to talk about the batch system. It is the cornerstone of TiKV's multi-raft implementation.

In TiKV, the raftstore thread and the apply thread are instances of the batch system. These two worker threads also operate in a fixed loop pattern, which is in line with the work model mentioned above.

Now, let's come back to the story. 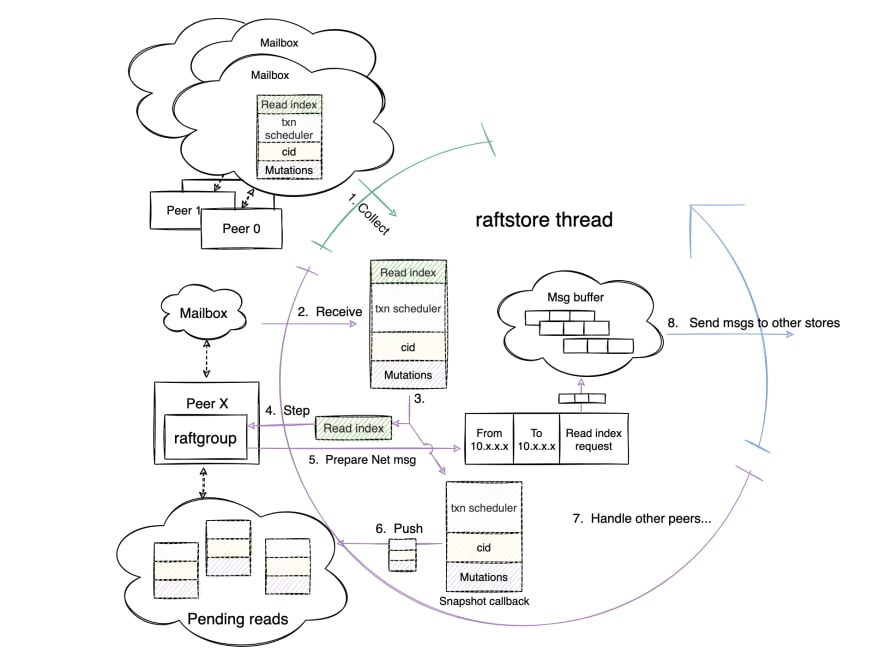 In this prewrite request example, the Raft command with the Raft Read Index request is stored in the peer's mailbox. After a raftstore thread collects the peer at step 1, the raftstore thread enters the handle messages phase.

The following are the corresponding steps that the raftstore thread performs in the handle message phase:

After the raftstore thread processes all the peers' messages, it comes to the last phase of a single loop: the process I/O phase (the blue part of the circle). In this phase, the raftstore thread sends network messages stored in the message buffer to the other TiKV nodes of the cluster via the network interface at step 8.

This concludes the Read Propose phase. Before the prewrite request can make progress, it must wait for other TiKV nodes to respond.

After a "long" wait (a few milliseconds are actually long for a computer), the TiKV node that sends the network message finally receives responses from other follower nodes, and saves the reply messages in the peer's mailbox. Now the prewrite request enters the Read Apply phase. The following figure shows the workflow in this phase: 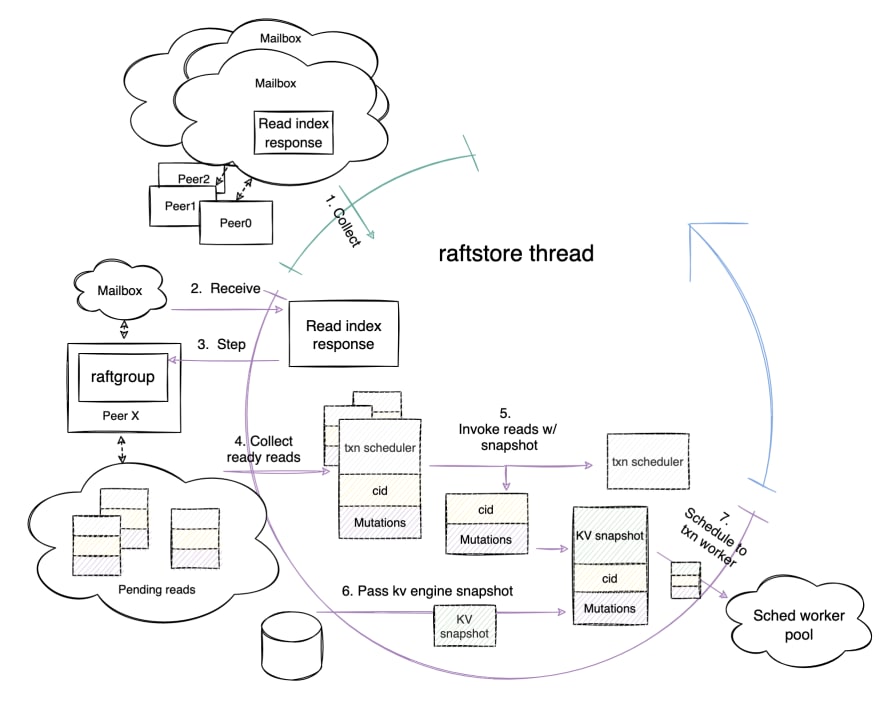 The hardworking raftstore thread notices that there is a message waiting to be processed in this peer's mailbox, so the thread's behavior in this phase is as follows:

This concludes the Read Apply phase. Next, it's the transaction worker's turn.

In this phase, when a transaction worker in the schedule worker pool receives the task sent by the raftstore thread at step 1, the worker starts processing the task at step 2 by splitting the task into the KV snapshot, the Mutations, and the cid. 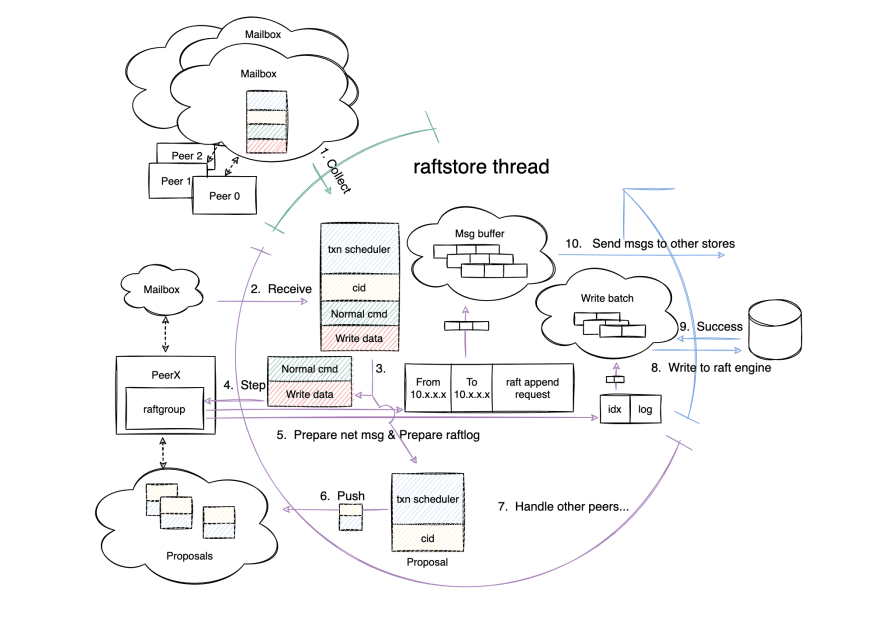 The first three steps in this phase are the same as those in the previous sections. I won't repeat them here. Let's go through the remaining steps:

The Write Propose phase is over. Now, as with the end of the Read Propose phase, the leader node must wait for responses from other TiKV nodes before it moves on to the next phase.

After another "long" wait, follower nodes respond to the Leader node and bring the prewrite request to the Write Commit phase. 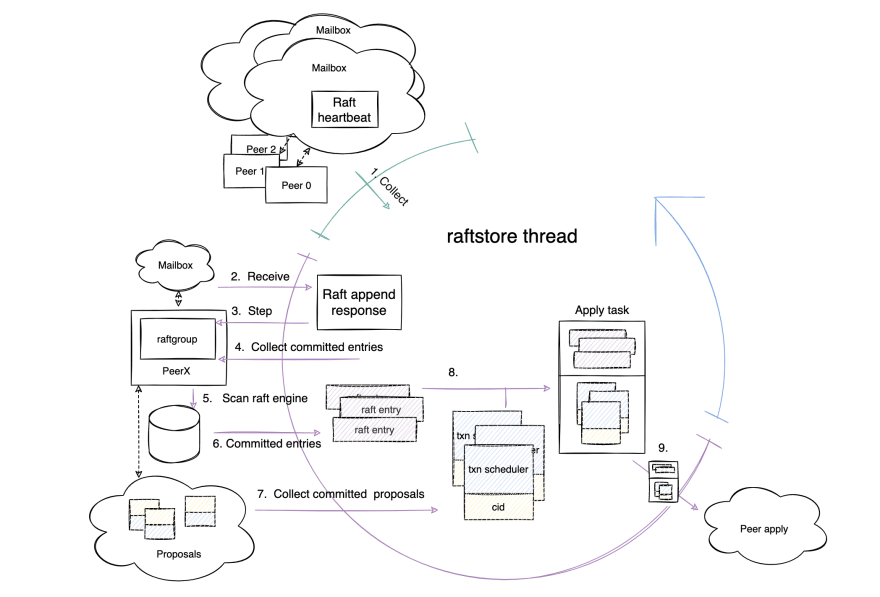 With the Write Commit phase coming to an end, the raftstore thread completes all its tasks. Next, the baton is handed over to the apply thread.

This is the most critical phase for a prewrite request, in which the thread actually writes to the KV engine. 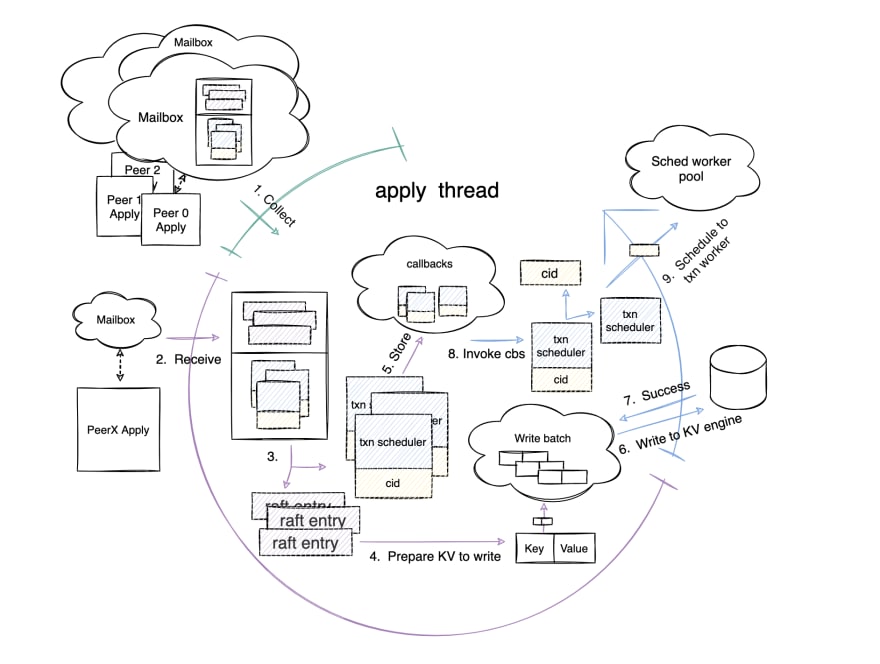 After the apply thread receives the apply task sent by the raftstore thread at steps 1 and 2, it continues with the following steps in the handle messages phase (the purple part of the circle):

Then, in the next phase (process I/O), the apply thread takes the following steps:

The workflow in this phase is mainly performed by the transaction worker:

This article introduces the eight phases of a successful prewrite request and focuses on the workflow within each phase. I hope this post can help you clarify the resource usage of TiKV requests and give you a deeper understanding of TiKV.

For more TiKV implementation details, see the TiKV documentation and deep dive. If you have any questions or ideas, feel free to join the TiKV Transaction SIG and share them with us!

Originally published at www.pingcap.com on June 29, 2021