In open source, we feel strongly that to really do something well, you have to get a lot of people involved.
Linus Torvalds

Heya Amigos !!
Hope everyone is building something great.

This is Abhijit Tripathy, a sophomore of Computer Science and Engineering from India. I am a python lover and an aspiring Machine Learning Engineer.

Most importantly, I am active Open Source Contributor 😍

Everything related to me can be found here - My Portfolio

Today I will be sharing my journey of Open Source and as I have completed the hacktoberfest 2020 challenge, I will be telling about some of my open-source projects in which you may contribute.

My open-source journey started with the three-month-long open-source competition organized by SCI. I was a part of the project named "Survival Analysis", which is a statistical model used for analyzing and predicting survivals in business, churning of customers, the survival of patients in clinical trials and much more. I have worked on the EDA(Exploratory Data Analysis) part of the model as well as managed to write a python script for the Nelson Aaelan Estimator, that's used for the hazard function in survival analysis. Also, I have worked in building some scripts with the dash module of python for the deployment of the project.
This was my first involvement as a contributor to any open-source project in a group and I was selected as the top 25 winners of the competition as well.
The project can be viewed here - Survival Analysis

This was 2.5 months-long open-source project competition organized by Letsupgrad, where I was able to ideate a project named "Algorithmic Treasure", and contributed as a Project Manager & Mentor for the same. The project is a long term association of developers in order to prepare a website having good resources for the interview preparing candidates. A group of 10-12 developers came together in order to build the primary version of this website.
The project can be viewed here - Algorithmic Treasure

I have got an opportunity to be a mentor for this open-source program, where I have contributed to one of the participating projects. Mentoring is a great opportunity to refine the skills and help others getting started with open-source. In this program, I have been chosen as the top 5 mentors.
The project can be viewed here - neoAlgo

This October 2020, I have got a chance to be the part of Hacktoberfest 2020, as an organizer, maintainer and participant. As I am a part of three global communities namely Developer Student Clubs,GGV,Codecademy Campus Chapter &Mozilla Student Developers,GGV, I have got a chance to organize two speaker sessions from industry professionals and achievers in explaining the basics of git & GitHub to my college people as well as giving them a chance to dive into opensource.
I have my python software package named eduAlgo participating in the hacktoberfest 2020 as an open-source project. Also, I have completed the challenge by submitting 4 PRs (three to DSC repositories, that included two Django beginner projects and a flask implemented car price, prediction model). Cheers !!! 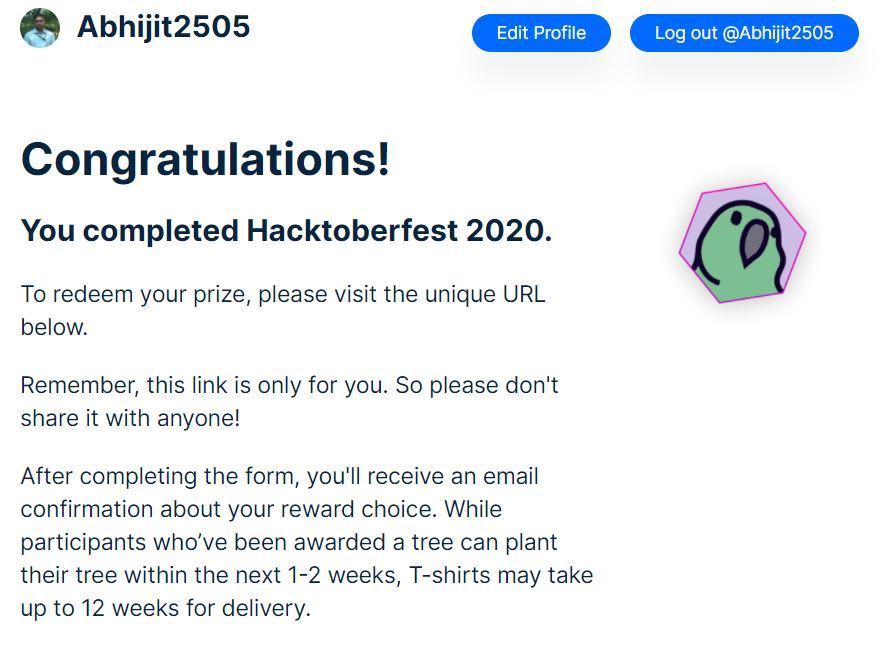 Recently I have got a chance to be a contributor for AOS20 organized by sanscript. This is an ongoing open-source project competition.

I have only one project opted for the Hacktoberfest2020.

In real open source, you have the right to control your own destiny.
Linus Torvalds

Once suspended, abhijit2505 will not be able to comment or publish posts until their suspension is removed.

Once unsuspended, abhijit2505 will be able to comment and publish posts again.

Once unpublished, all posts by abhijit2505 will become hidden and only accessible to themselves.

If abhijit2505 is not suspended, they can still re-publish their posts from their dashboard.

Once unpublished, this post will become invisible to the public and only accessible to Abhijit Tripathy.

Thanks for keeping DEV Community 👩‍💻👨‍💻 safe. Here is what you can do to flag abhijit2505:

Unflagging abhijit2505 will restore default visibility to their posts.