As someone who works in data, my relationship with Microsoft is mixed.

It's like having a grumpy mean father, but has never missed a ballet recital and was there for you that one time you did the thing with the golf ball that your mother can never hear about.

The tools Microsoft have provided to the field have been plentiful, some have even gone on to become staples of the data community, however, some of these are for better and some have been for worst.

It's been in the top three in terms of DB-ranking, since 2013 and the truth is, if you have a production transactional database built anytime in the past 10 years, It's probably T-SQL.

And while it looks to be slowly loosing ground to other products and new ways of crunching data, it's definitely not going anywhere, new versions and more modern variants are available. Those in the Azure cloud will find several reasons to use the latest SQL Server.

For many of us, Microsoft Excel is our first exposure to analysis. It taught us some fundamental stuff like tables, vlookups, pivot tables, graphs, and maybe a touch of VBA.

However, Excel is the awesome party guest who has overstayed their welcome. Cool at the beginning, but now they really need to leave.

My problem with Excel is that for many people and companies they never move on to other tools. They very much, double down on making Excel perform tasks it was never built to do. Choosing to learn and build suites of VBA plugins and hacky work-around's to do things other analytical tools can natively do in seconds.

It's a case of the training wheels that never came off.

Too many analysts are being robbed of the opportunity to take those training wheels off, and the blame lies in two distinct camps.

Camp number one, is the customer. The customers who are themselves only familiar with Excel, it's come pre-installed on just about every computer they have ever touched. They also don't trust insights that they can't personally inspect the raw data of. In this age of big data, we are still hearing 'Can I see it in Excel?' at an alarming frequency. 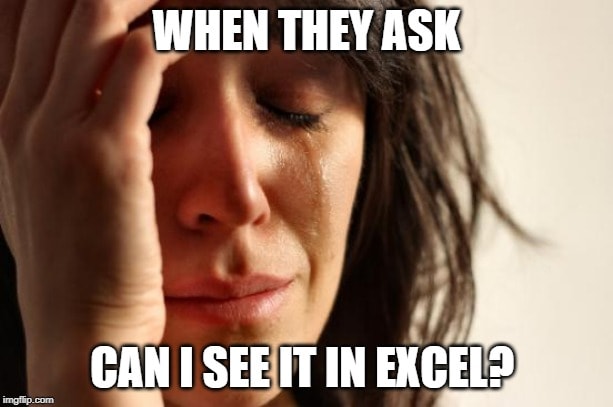 Camp number two, is that Excel is a desert island. Analysts are stranded on this island, unsure which Island they should travel to next. The islands of Python, R, SQL are too far off in the distance, but closer are all the 'Excel Plugin' islands promising fresh water and tasty mango's. It's very easy to see how some very good analysts never make it to Python island and instead spend the rest of their lives searching stack overflow for answers to VBA questions.

Microsoft Access is the child who tried to help but instead ruined everything, it's not the child's fault, their heart was in the right place, however the results are disastrous.

And that is what makes Microsoft Access the Ugly. It always ends in disaster.

Billed as "Babies first Database" it's easy to pick up and administer.

However nine times out of ten what ends up happening is that the Access Database quickly becomes a business critical piece of software being run off a random employees local machine.

This quickly becomes a major security and data risk, often requiring the Data Warehouse team to quickly consume the access database to negate the risks it posed and to keep the fancy executives who had begun to rely on it at bay.

It's often like fighting a hydra as for every one access database that is dealt with, two more pop up randomly amongst the business. It is for that exact reason that many companies running the Microsoft Suite do not allow Access to be installed at all.

Avoiding hotspots in pgbench on 🐘or🚀

Alex Antra
Data Professional All views expressed here are my own.
Data abstinence in the name of being an ethical data company is not a sound operating model
#data
Doing the Impossible, using ASSISTANT to make a SQL Linter (and how you can make it lint whatever you want)
#sql #vscode #tutorial #productivity
What they don’t tell you about being an analyst
#data #analysis #sql #database

Once suspended, alexantra will not be able to comment or publish posts until their suspension is removed.

Once unsuspended, alexantra will be able to comment and publish posts again.

Once unpublished, all posts by alexantra will become hidden and only accessible to themselves.

If alexantra is not suspended, they can still re-publish their posts from their dashboard.

Once unpublished, this post will become invisible to the public and only accessible to Alex Antra.

Thanks for keeping DEV Community safe. Here is what you can do to flag alexantra:

Unflagging alexantra will restore default visibility to their posts.