During a recent diagnostic analysis exercise I needed to identify if there was additional "work" being done based on a single option being changed. As Ruby offers numerous productivity tools for developers it should come as no surprise that a mechanism to easily produce a full call stack for one to many operations exists.

The code below is using the MongoDB Ruby Driver and Mongoid ODM to $sample a single document with a Read Preference passed in from the command line. The collection likely won't exist however the goal of this analysis was simply to see what differences changes the read preference would expose.

For the purposes of my analysis I wanted to produce a diff of two call stacks to try and see "where" there may be a difference in the amount of "work" being performed. To do this the first step was to introduce instrumentation via a TracePoint.

The above will trace all Ruby method calls executed within the block and push them in to an array. By running the above script twice with different options and feeding the results into a diff tool (such as icdiff) a visual representation of how the call stacks differ can be generated. 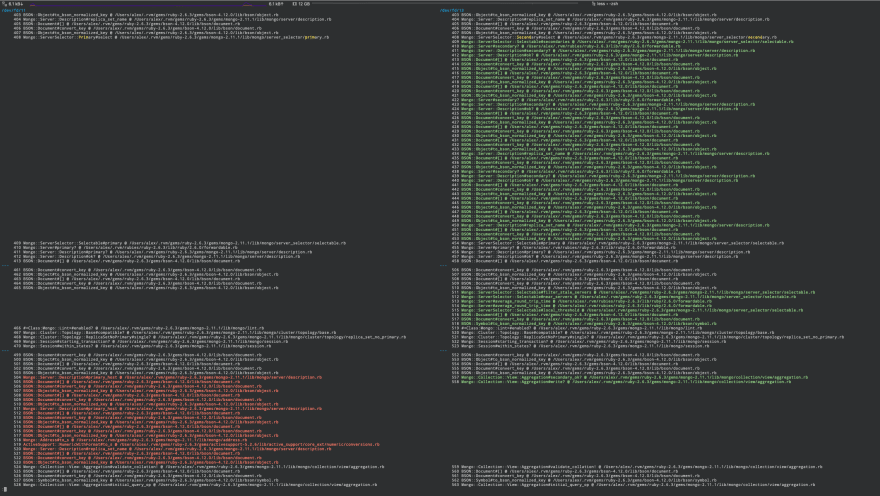 (Open screenshot in a new tab to get a better look)

The with_tracepoint helper method in the script above is only filtering on :calls, however can easily be modified to filter based on your particular needs (see TracePoint Events for the full list).

Let me know if this approach helped you troubleshoot a particular issue or identify an interesting defect.

Once suspended, alexbevi will not be able to comment or publish posts until their suspension is removed.

Once unsuspended, alexbevi will be able to comment and publish posts again.

Once unpublished, all posts by alexbevi will become hidden and only accessible to themselves.

If alexbevi is not suspended, they can still re-publish their posts from their dashboard.

Once unpublished, this post will become invisible to the public and only accessible to Alex Bevilacqua.

Thanks for keeping DEV Community safe. Here is what you can do to flag alexbevi:

Unflagging alexbevi will restore default visibility to their posts.