Kafka is an excellent tool for data processing in streaming mode. It can help build great tools, especially when we need to analyze some streaming data (like user analytics, some events, etc. Kafka as storage with Kafka streams will help process even some data with the name "big data".

However, this article will describe only one use case where Kafka can be used as well.

This task has the name "message queue". It is an essential part of every project I was involved. People try to solve this task in different ways:

Kafka pretends to be used as a designed tool for this specific task and provides incredible guarantees. Therefore, we will review only this part. I hope it will help us to understand Kafka is the right tool for the next project.

Also, we will skip the partitions1 part.

Before the review the implementation of the pattern in Kafka, let's overview it is in general.

If we want to guarantee that message was processed at least once, we need to introduce some acknowledge method to our message processing pattern. Let's add the commit method:

As a result, we will have three methods for our message queue:

Example with the simple flow with one message: 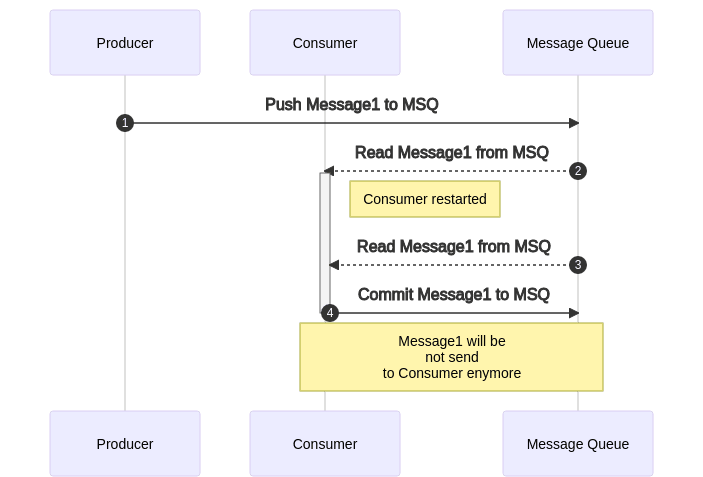 First of all, let's overview the main features you will deal with when you choose Kafka as a message queue.

With this information, we need to understand the main concepts we will work with. We will not only deal with event publishing and consumption. There are more things we will deal with.

Message queue in Kafka builds over Kafka message stream. Actually, the message stream is just storage with all messages sequentially persisted. Data from the storage can be read by batches of them with a specific size in bytes.

Kafka can be used as a storage to read the data and build some decisions on top of it.
This solution is usually used in Data Science.
If we need to speed up calculation over the data, we can use Kafka Streams2.

When we want to use Kafka as a message queue. We read a batch of messages[^read_batch_message] with some shifts, parse them and start to process.

This article should not focus on the partitions feature in Kafka, but unfortunately, it's impossible to skip the topic in a consumer/producer context.

Warn: All messages with the same key (for example, user_uuid) will be sent to the same partition.

When we create a topic, we can specify the number of partitions (for example, 3). Then, base on the message key (usually generated UUIDv4) Kafka client will choose one of the partitions and send a message to this partition.

The diagram above shows an idea of how Kafka client sort messages between partitions.
Partitions from topics used for Kafka distribution (add new nodes to a cluster) and consumer distribution as well see consumer paragraph.

The producer works most simply. We just produce message3 (send it to Kafka). Nothing special we want to discuss.

As we agreed before, we will not review the part of the partition. In this stage, we will work only with group readers.

Kafka provides consumer groups feature. Group ID should be provided4 by a consumer that reads from a topic.

Two consumers from the same group will not receive the same message. Instead, every consumer will follow their specific partition(s) and receive a message from them.

If we use user_uuid as a message key, then all messages from the same user will always be sent to the same partition and processed the same consumer 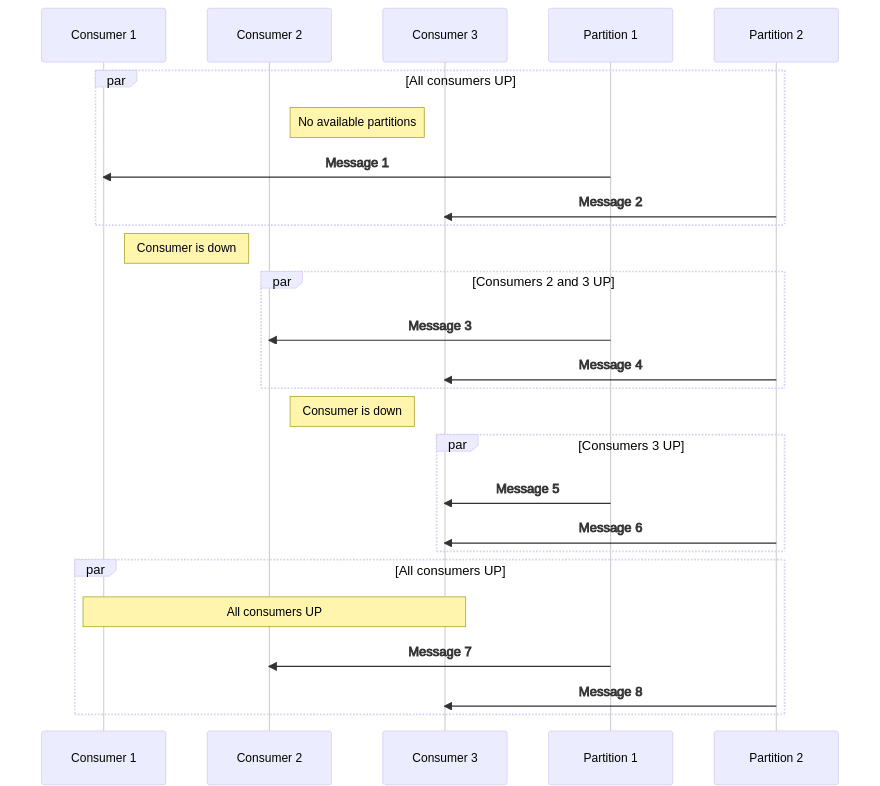 As we can see on the diagram, consumers automatically assign between partitions while they are running.

Warn: If we have more consumers than partitions, some of them will idle. 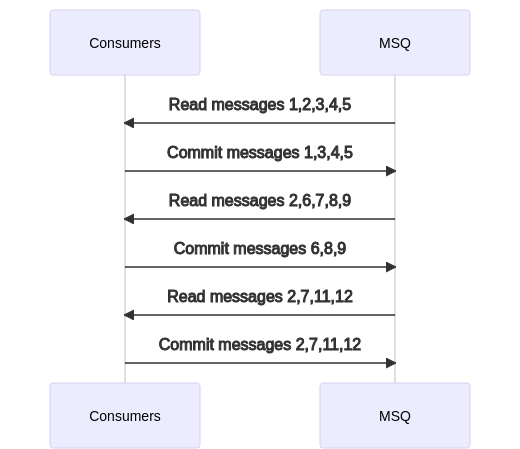 In the diagram above, we can see the example of our expectations. If we do not commit some individual message, we will receive it again soon, but it will not stop processing for the following messages.

As we discussed, Kafka does not provide an API to work with messages individually, so we will shift our pointer of reading messages.
If we skip one message and do not want to commit it, we cannot move forward, and we need to wait until this message is processed or ignored to shift our pointer and move forward to the next batch. 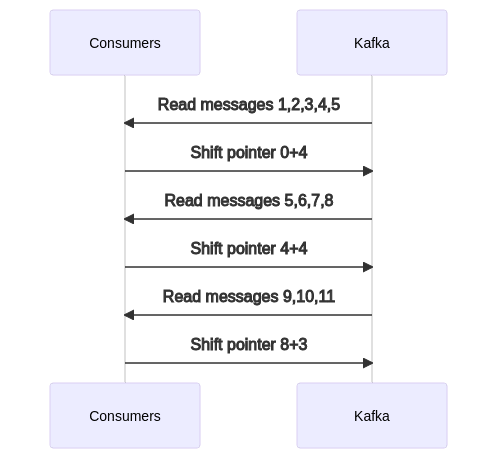 Follow the diagram, we can see that we have to process all messages in any way if we want to move forward.

Warn: Kafka will not solve our individual message processing task. We have to think about a use case when a message cannot be processed.

Kafka is a powerful tool for message processing, but it has some limitations as with any other tool.
It can solve a task with billions of messages, and it's a fast solution, and it's a solution with fault-tolerance out of the box. Unfortunately, however, we have to pay for these great features by increased complexity.

When we choose Kafka for the message queue task, instead of, for example, RabbitMQ, let's remember about limitations and architecture decisions to cover edge cases in our code itself to make our product the best.

The main point I would like to highlight one more time:

I hope this article will help someone to avoid the main mistakes while working with Kafka at first.

How I Set Up Wifi In Debian 11

Getting started with data visualization with Dash and recent search counts

Anton Ohorodnyk
How do you manage your emails?
#watercooler #career #productivity
Should I use SQLite, PostgreSQL, or MySQL?
#sql #database #webdev #discuss
No estimations
#agile #productivity #discuss #career