Tooltips in our app were taking >80ms. And during this time, the main thread was blocked, you couldn’t interact with anything.

Other components like modal, popover, dropdown had similar performance issues. In some cases, a modal took more than 1 second to appear while making the UI unresponsive. 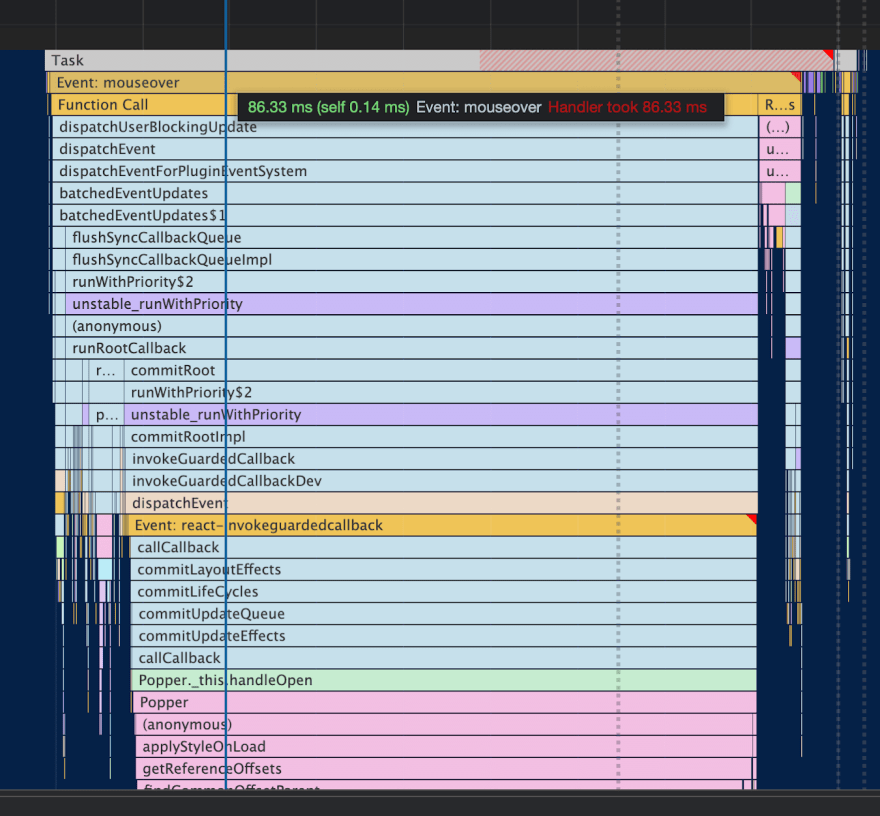 The main reason for the slowness of Tooltip was Recalculate Style being called at the end of mouseover event call stack which takes a lot of time.

I noticed the tooltip performance was inversely proportional to number of DOM nodes currently in document. 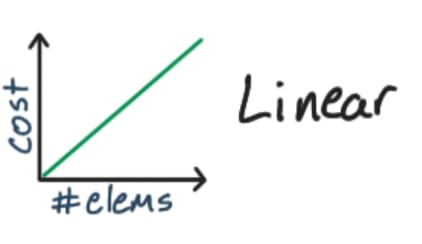 Before diving deep into the investigation, we’ll talk about some prerequisites.

How browser works at page load

The browser creates a DOM tree from the HTML string.

You can see it as Parse HTML in the performance timeline in Chrome DevTools.

Then the CSS is parsed and browser creates the CSSOM (CSS Object Model). 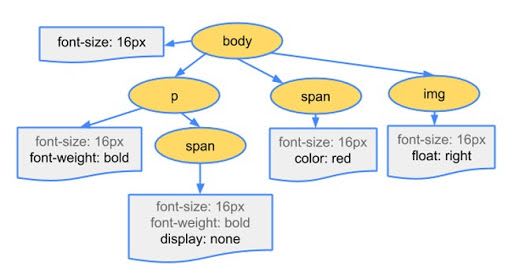 Then the browser combines the DOM and CSSOM to create the render tree.

Important: render tree is invalidated when we modify DOM or change styles of any element.

Next step is layout. Layout is calculating the size and positions of elements of the render tree, to know where we have to draw exactly. This is referred to as Layout in the performance timeline.

Layout may need to be done again whenever there is a change in size/position of an element which affects the position of all the elements in the page. Layout is also known as Reflow.

Next steps are paint and composting but we won’t talk about them here as they are not important for explanation of this topic.

How browser handles rendering during runtime

To render a frame in a browser, we go in this order: JavaScript runs, then there are style calculation, then layout. Ignore Paint and Composite for now.

When we access any layout property like offsetWidth, offsetParent, width etc, the browser returns the value from previously calculated layout calculations, which is not expensive as the calculation was done earlier in the previous frame and now we are just reading it.

But what happens when we change a style on an element or modify the DOM? Then the browser has its own heuristics and is smart enough to know if the browser needs to Recalculate Style/Layout in the current frame or defer it for later.

You can see it as Schedule Style Recalculation in timeline.

The problem happens when we try to access a layout property just after we change style/modify DOM. Then the browser has to force Recalculate Style/Layout because browser has to return the current value, it cannot give you a stale value from the previous frame. This causes the problem known as Layout Thrashing.

Here we are first changing the style and then immediately reading offsetHeight property which causes a Synchronous Forced Layout. 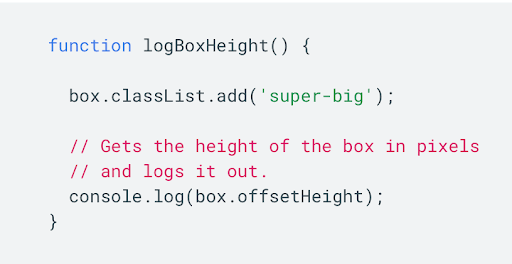 You’ll see this warning in browser when this happens:

This is fine because we are first reading the layout property offsetHeight which is not expensive as we are just reading the value from the previous frame’s layout calculation. Then we change the style later which is ok, the layout might still happen but it is up to browser when to do it, it is not forced. 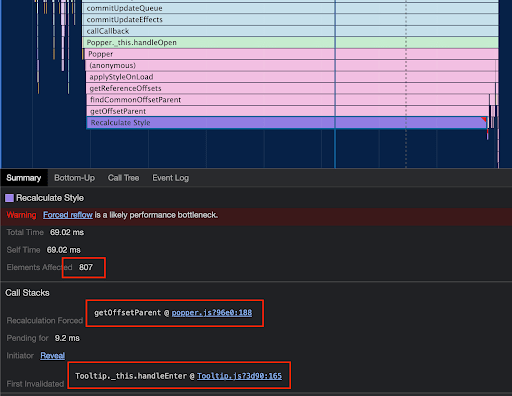 Here we can see a lot of elements (807) are affected by the Recalculate Style event which is the reason this event takes a lot of time.

The Call Stacks detail gives us important information to debug this issue. The field Recalculation Forced shows the value getOffsetParent @ popper.js:188 which is this code in popper.js@1.15.0:

The First Invalidation shows where in code, the render tree was first invalidated which later caused Forced Reflow because of Recalculation Forced code.

Doing setAttribute on an element in DOM is invalidating the render tree, and then accessing the offsetParent causes a Forced Synchronous Layout.

Had this been done in the opposite direction it wouldn’t be a problem.

I tried commenting the setAttribute code and again ran the performance timeline. But the issue was still there but the invalidation was happening somewhere else. 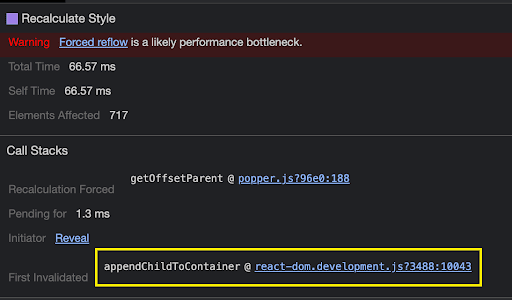 The invalidation is now happening when the tooltip is added to the body, which invalidates the render tree.

But all this is not in our control as the code is in the third party library popper.js.

Now, what can we do?

Next, I created a separate container in the body where the tooltip would always be attached.

And instructed the popper to be rendered in this container.

Now, the performance was greatly improved, the Recalculate Style still happened but its cost was less than before. 0.79ms down from 66.57ms: 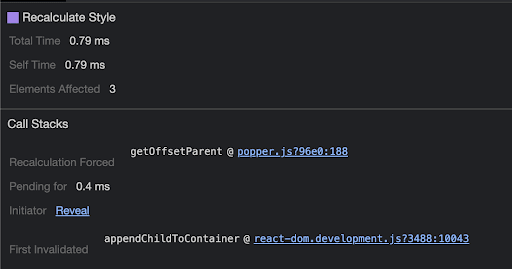 The Element Affected is 3 which is the number of nodes inside our tooltip container.

The ideal case would be to not access the offsetParent property in DOM after attaching it, but it is needed for popper.js to calculate where to render the tooltip.

The mouseover event in our tooltip finishes much quickly and does not cause jank in the experience. 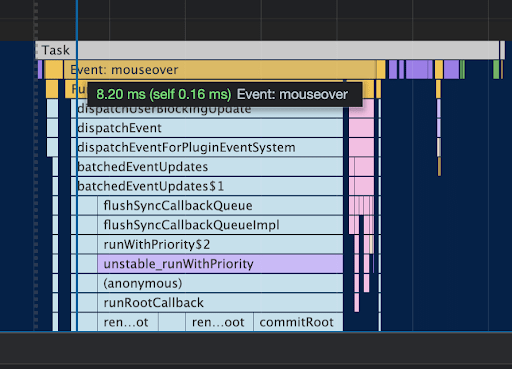 Once suspended, atfzl will not be able to comment or publish posts until their suspension is removed.

Once unsuspended, atfzl will be able to comment and publish posts again.

Once unpublished, all posts by atfzl will become hidden and only accessible to themselves.

If atfzl is not suspended, they can still re-publish their posts from their dashboard.

Once unpublished, this post will become invisible to the public and only accessible to Atif Afzal.

Thanks for keeping DEV Community 👩‍💻👨‍💻 safe. Here is what you can do to flag atfzl:

Unflagging atfzl will restore default visibility to their posts.