When there are different environments (development, quality, production) in AWS, and we separate them in many VPC's or AWS accounts, but need access to the same EFS (Elastic File System), we can apply a configuration with VPC Peering.

A VPC peering connection is a networking connection between two VPCs that enables you to route traffic between them using private IPv4 addresses or IPv6 addresses. Instances in either VPC can communicate with each other as if they are within the same network. 2

We have two VPC in the same region with EFS connection using VPC Peering. 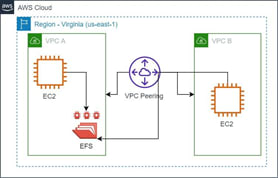 For example, we create VPC Peering with the following network.

2- Later in the previous phase, we configure and create EFS. Here I share guide: https://docs.aws.amazon.com/efs/latest/ug/gs-step-two-create-efs-resources.html

Before this, we create a directory /efs/shared, and we edit file /etc/fstab and add the following line:

We check that it is set up EFS using the command: df -h

Now, we create a file with two lines.

And we repeat the previous step but, now with the instance in VPC 172.3.1.0.0/16 however, for a successful connection, we must make the last command’s.

4- Open a Cloud Shell in the Virginia region, then execute the following command: 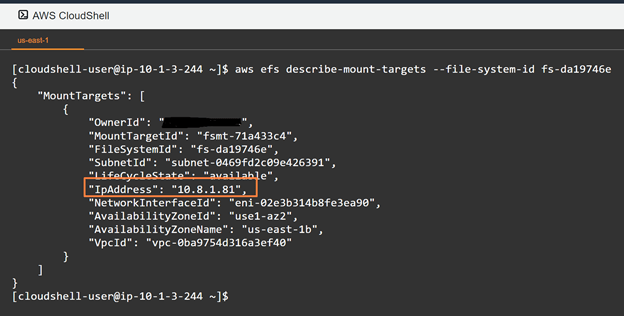 Obtain the interface IP of the EFS and write the following command in the instance EC2 the VPC 172.31.0.0/16

Later, we execute the same process and create directory /efs-shared and add it, then set up the disk in /etc/fstab the instance EC2 with the following command: mount /efs/shared. Finally, we verify if there is a file with the name "test".

With these steps, now we have obtained EFS access in the different VPC no matter where EFS are configured.

● Verify that the security group is attached to the EFS and available open port TCP:2049.

● VPC Peering has route tables that associate the connection with the EC2 instances.

● For this example, we use a network interface, the EFS, but you can use more interfaces in different subnets associated with the VPC.

● You can connect VPC Peering with different AWS accounts and other regions in the same account; however, it is important that the networks are not the same because VPC Peering doesn't accept the equal networks.

Once unpublished, this post will become invisible to the public and only accessible to Víctor Pérez Pereira.