note: this is a cross-post originally written on my blog

Outlier detection can be achieved through some very simple, but powerful algorithms. All the examples here are either density or distance measurements. The code here is non-optimized as more often than not, optimized code is hard to read code. Additionally, these measurements make heavy use of K-Nearest-Neighbors. Consequently, they not be as useful at higher dimensions.

First, lets generate some data with some random outliers. 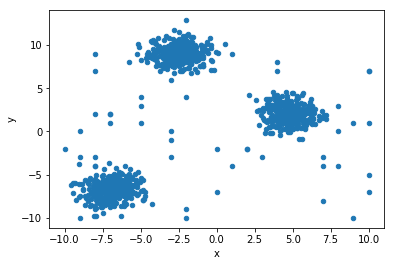 Four separate algorithms are shown below:

This is a very intuitive measure. How far away are you from your Kth neighbor? The farther away, the more likely you are to be an outlier from the set. 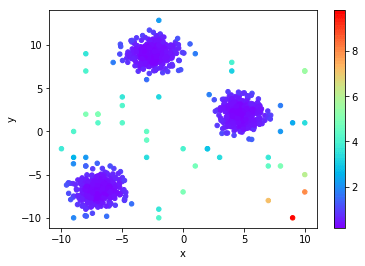 Very similar to KthNN, but we average out all the distances to the K nearest neighbors. Since KthNN only takes a single neighbor into consideration, it may miss certain outliers that TNN finds.

Notice the point in the upper-right corner, TNN determines that it is more likely an outlier due to how far it is from all its neighbors. 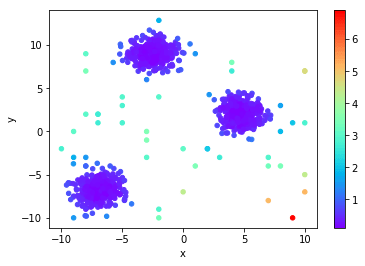 This algorithm is slightly more complicated, though not by much.

The paper explaining it in depth is here.

Here is the simplified version.

We have already calculated one part of this algorithm through TNN. Lets call keep this value as TNN(x), for some point x.

The other part is what the paper calls the "KNN inner distance". This is the average of all the distances between all the points in the set of K nearest neighbors, referred to here as KNN(x).

You can notice the effect of the "cloud" idea. All the points between the clusters are marked with a much lower probability of being an outlier, while those outside the cloud have a much higher likelihood. 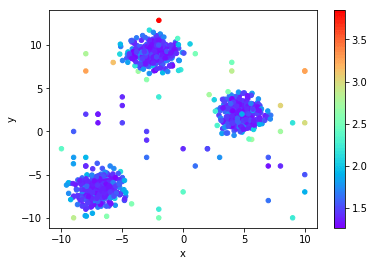 This makes reachability_distance asymmetrical. Since A and B have a different set of K nearest neighbors, their own distances to their Kth neighbor will differ.

Using reachability_distance we can calculate the local_reach_density to point's neighborhood density.

For some point x, its local_reach_density is 1 divided by the average of all the reachability_distance(x, y) for all y in KNN(x), i.e. the set of x's K nearest neighbors.

Armed with this, we can then compare point x's local_reach_density to that of its neighbors to get the LoF(x).

The wikipedia article on lof gives an excellent, succinct mathematical and visual explanation. 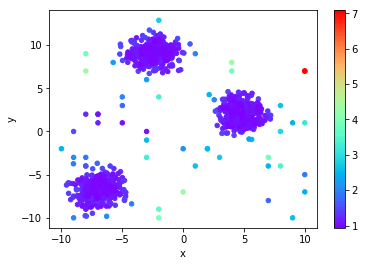