as a long time windows user and php developer, i can only say: do not use DIRECTORY_SEPARATOR! it has no real benefit but really can break things.

use /. it is the better choice nearly every time. 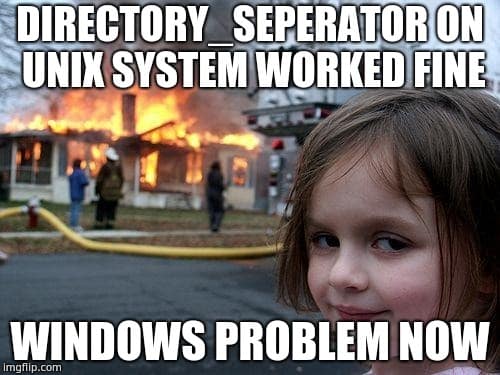 if you use DIRECTORY_SEPARATOR, which resolves to \ on windows, things tend to break. For example:\ gets converted to %5C in urls.

if DIRECTORY_SEPARATOR is used, it easily happens that the (relative) path, which will contain a backslash on windows, is passed to something which should be a url. assuming that most of the php developers are using linux or mac (i personally don't know many people who develop php on windows), they don't notice that in a windows environment a backslash is passed to the url and gets escaped as %5C which leads to urls like in the example above.

windows and php on windows are capable of opening files with the path foo/bar\example/test.txt
so DIRECTORY_SEPARATOR is of no real use except for easily detecting windows or for example if you export a path for a file list where a windows user would be confused to see / instead of \

How to Implement Laravel Modules Structure with Nwidart Package

Add a CLI interpreter for PHPStorm in MontereyOS

How Install MySQL and Workbench on Windows