In our previous article, we explained the vision behind GitOps 2.0 and the features we expect to be covered by GitOps 2.0 tools.

In this article, we will see how the new Codefresh GitOps dashboard is the first step towards this vision and more specifically in the area of observability and traceability.

Getting visibility into deployments

Deploying a new release into production is an important milestone for all project stakeholders. The developers write the code, the operators deploy the new artifact and product owners can finally mark a feature as “shipped”.

The reason behind this dichotomy is probably that each role needs access to different information. This might be true in a historical context but goes against the ideas and principles of DevOps (bringing all team members together).

Ideally, deploying a release should be so easy to perform/monitor/rollback that any team member can handle a deployment event and still have access to all critical information such as which Git commit was deployed and what new features are now available.

Deployment value comes from features and not Git hashes

In the GitOps 2.0 article, we outlined the gap that exists today between the low-level deployment information (i.e. the Git hash) and the value it brings after a deployment (i.e the actual features).

Product value is not measured in Git hashes, but instead in the number and significance of new features that are deployed to production. New features are typically recorded in an issue management system (e.g. JIRA) and have their own lifecycle according to what the organization desires.

As a first step towards the vision of GitOps, we have decided to address this information gap and solve the observability problem by combining these two kinds of information (git hashes and features) in a single cohesive view.

You can now use the new Codefresh dashboard and correlate extra information on top of a single Git hash.

Our new GitOps dashboard provides a single pane where instead of looking for simple Git hashes, you can now see: 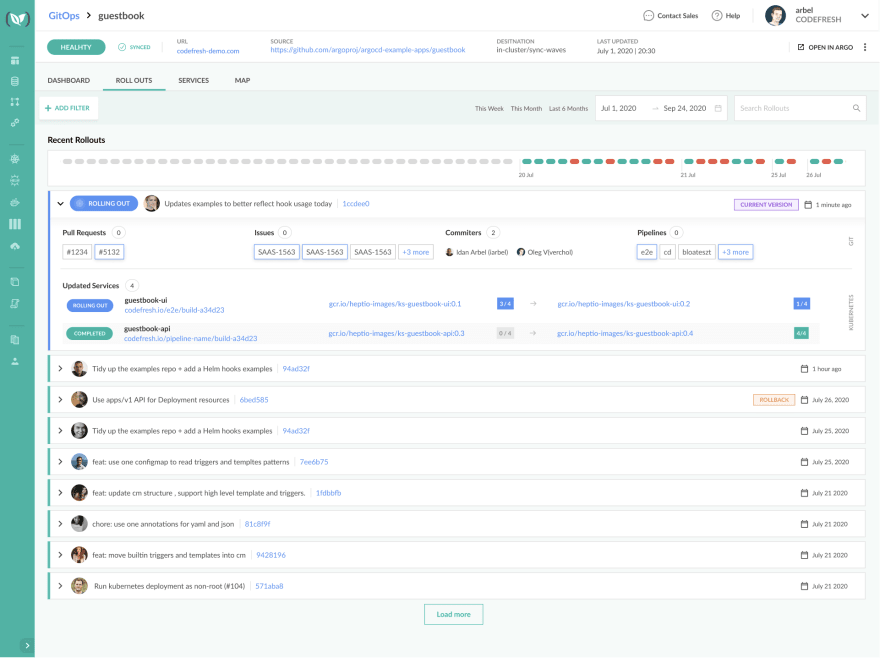 With our new GitOps 2.0 dashboard, we are addressing the visibility and observability problems that plague existing GitOps tools.

Now you can finally get an overview of GitOps deployments in the context of features instead of just Git hashes. In addition, you can rollback to a specific feature (and/or pull request) in addition to a Git hash.

Using the dashboard you will be able to answer questions such as:

These are just a few examples of the capabilities you gain with the new GitOps 2.0 dashboard in its initial release. We have several other enhancements on our roadmap and we also welcome any additional feedback that you have regarding the structure and functionality of the dashboard.

Instead of re-inventing the wheel, the new GitOps dashboard is powered by Argo CD, the popular deployment solution that can manage Kubernetes applications using a pull mechanism.

To take advantage of the Argo integration, you simply install our agent in the same namespace as the Argo services. Installation is as simple as running a single command via the Codefresh CLI:

Once the agent is installed, Codefresh has two-way communication with Argo CD via its API. For example, Codefresh will automatically mark an application as out-of-sync if the cluster configuration no longer matches the Git repository, which holds the manifests file that describes the application.

With the Argo CD integration in place, you can also define GitOps application right inside the Codefresh UI, with the same options available to Argo CD 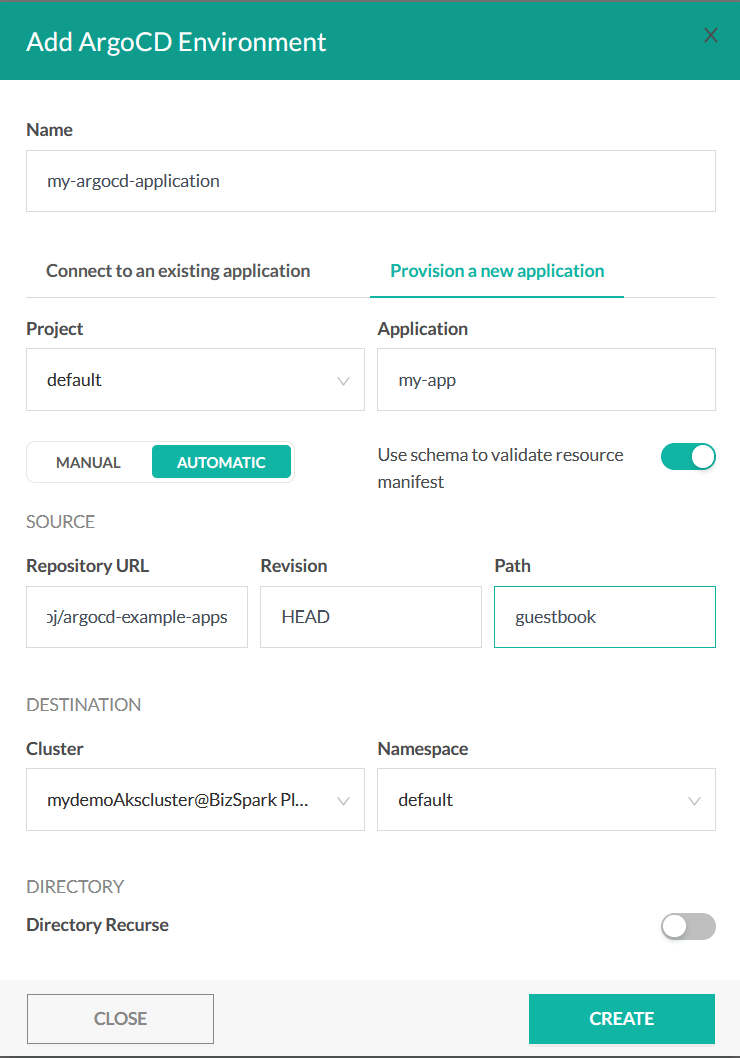 It is important to notice that at all times you can still use the Argo CD user interface in addition to the Codefresh UI.

With the Integration of Codefresh and Argo, you now have a full CI/CD solution at your disposal.
Argo CD is a great deployment tool on its own, but it can only handle the last step in a pipeline created for GitOps deployment (the sync part).

A full deployment platform also needs the ability to compile applications, run unit tests, perform security scans, etc. These capabilities are out of scope for Argo, but are perfectly possible with Codefresh.

On the other hand, Codefresh already has strong CD foundations, but they are based on the push-model (deploying Helm packages on a cluster). With the addition of Argo, our customers can now create GitOps pipelines if they prefer.

This means that one can now create complete GitOps pipelines that are not possible by using Argo on its own.

For example, a very popular pattern for deployments is to have pre-sync and post-sync steps in a deployment pipeline. 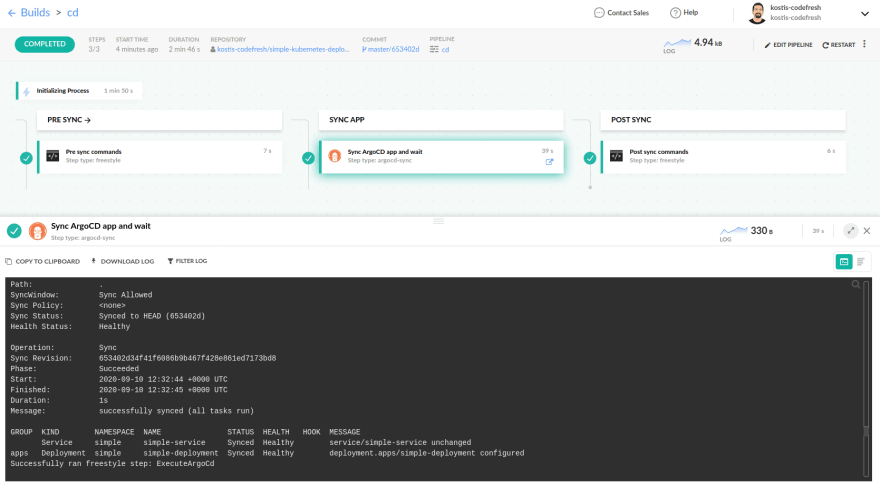 A possible scenario for a pre-sync step is to send a message to your monitoring solution that a deployment is about to take place. This way your monitor solution can place a “marker” on your time-based metrics to evaluate the health of the deployment (and possibly rollback automatically if the metrics are not healthy).

A possible scenario for a post-sync step is to perform smoke testing on the deployment that was just synced. Codefresh has great support for both unit and integration tests both of which require the capabilities of a full CI/CD platform.

As a more advanced scenario, Codefresh can actually orchestrate a single deployment pipeline that follows the GitOps paradigm as it is possible to automatically perform a Git commit inside a pipeline (as well as a replacement on the manifests).

The example above is a single pipeline that:

Of course, a pipeline like this can be easily enriched with additional steps for testing, linting, security scanning, etc.

It is important to note that the existing CD capabilities of Codefresh (and all dashboards such as the Helm promotion one) are still available to companies that wish to continue using them even if you don’t want to follow the GitOps paradigm.

Getting started with GitOps 2.0

With the marriage between Argo and Codefresh, you get a full CI/CD platform that combines the ideas of GitOps, along with an extensible model of pipeline building that can match any possible deployment scenario.

To get started you can now open a free account with Codefresh and then follow our documentation guide for GitOps deployments.

How do you merge millions of small files in a S3 bucket to larger single files to a separate bucket daily?