While there is some overlap in the technologies used by developers and non-developers involved in VR, none of them have a strong appeal for both audiences. The Oculus technology suite comes closest to being the go-to platform for both developers and non-developers, with over 35% of each audience using the platform. Playstation VR, Windows 10 Mixed Reality & Google Daydream all attract a good proportion of non-developers (36%, 28% and 26% respectively), but fail to appeal to VR developers. This landscape creates an opportunity for a technology vendor willing to invest in widening support and access for one (or both!) audiences, as a unified tech stack would provide large efficiency benefits to integrated teams by integrating with other tools and platforms, streamlining training needs and reducing the variety of tools being used. 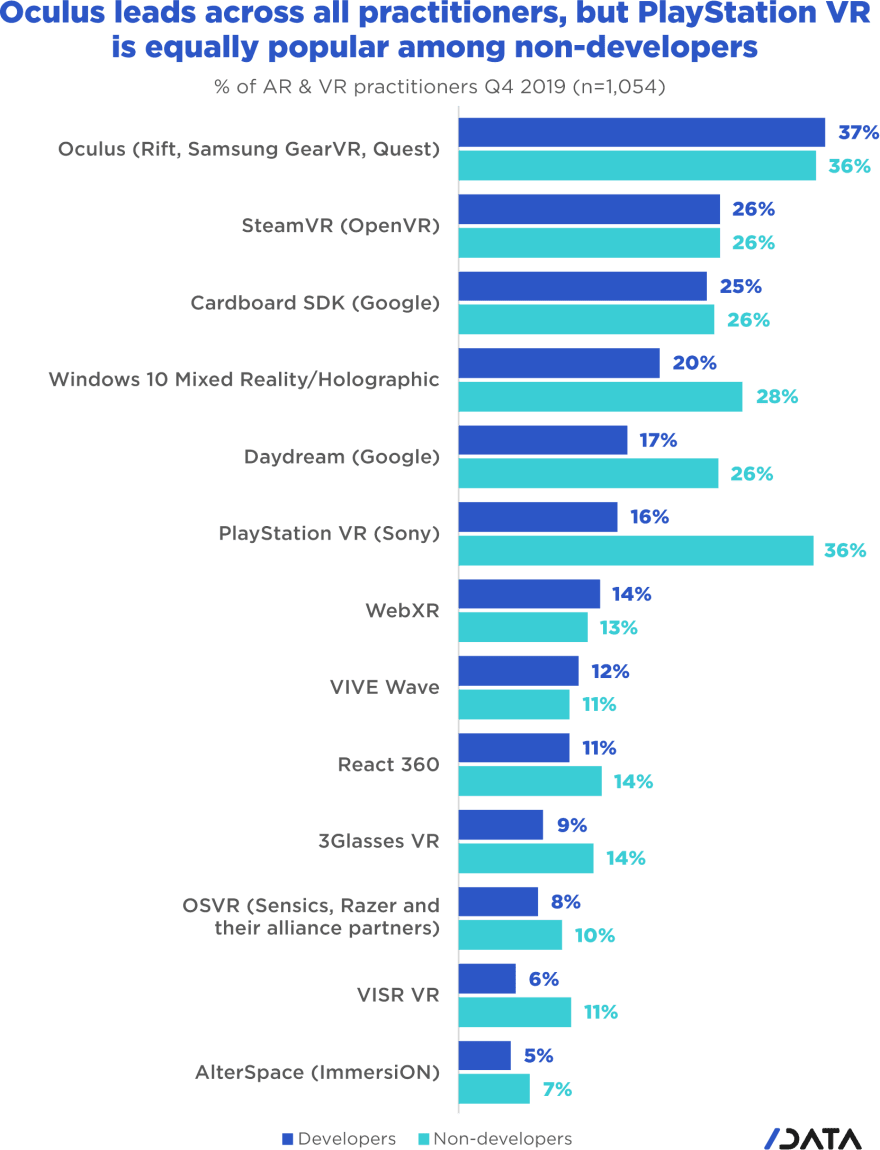 Unity Mobile AR, AR Core and AR Kit lead the pack of software tools for people creating AR products, but all of these tools are favoured more by developers than by non-developers. This suggests that there is space in the AR software market for a tool which allows non-developers to more easily realise their creative vision. 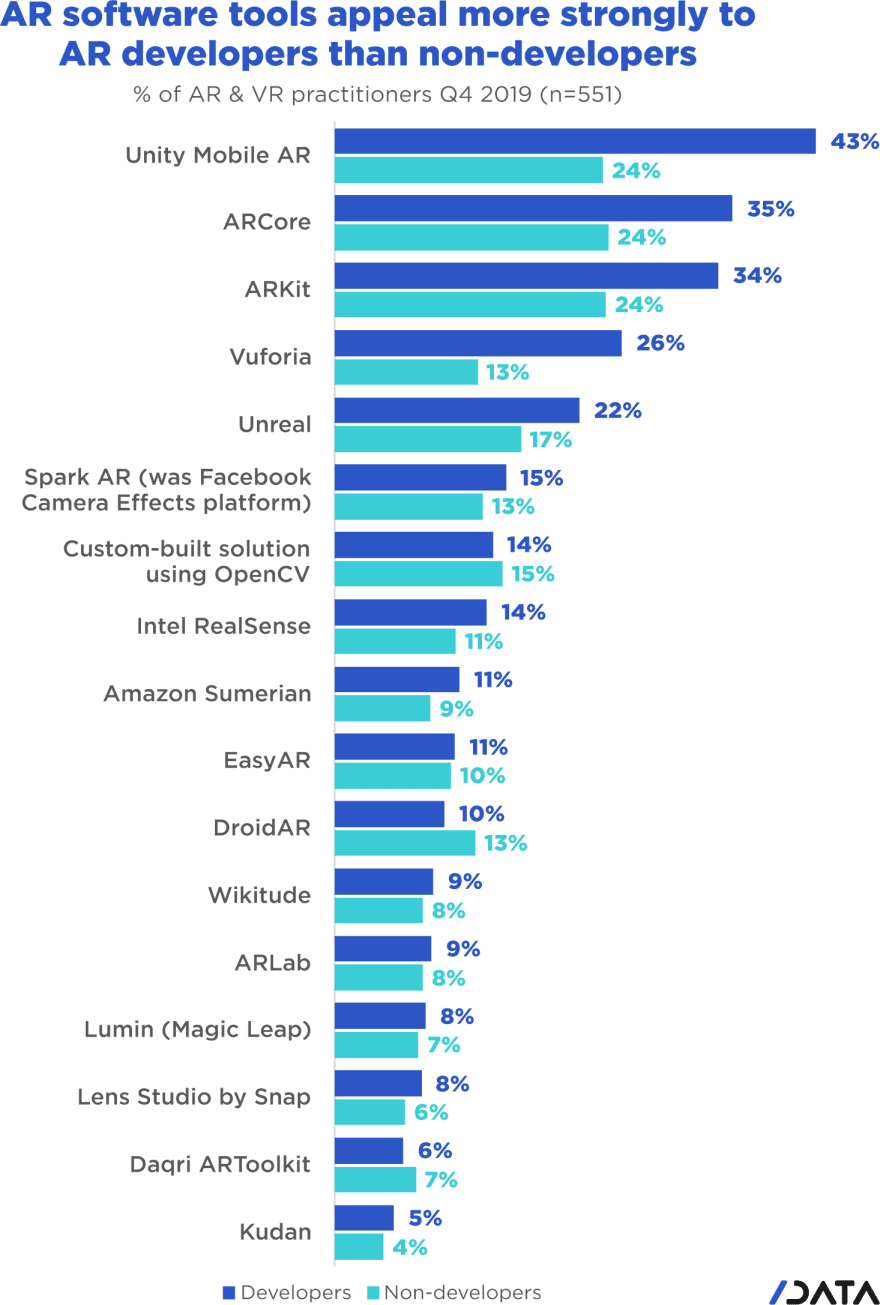 Over half of developers use game engines and 48% use 3D modelling and rendering software. The high uptake of these technologies amongst AR/VR developers is testament to the powerful efficiency gains available from the abstraction they offer, as well as that AR, and especially VR, lend themselves to game development.

Over 50% of AR & VR developers use game engines 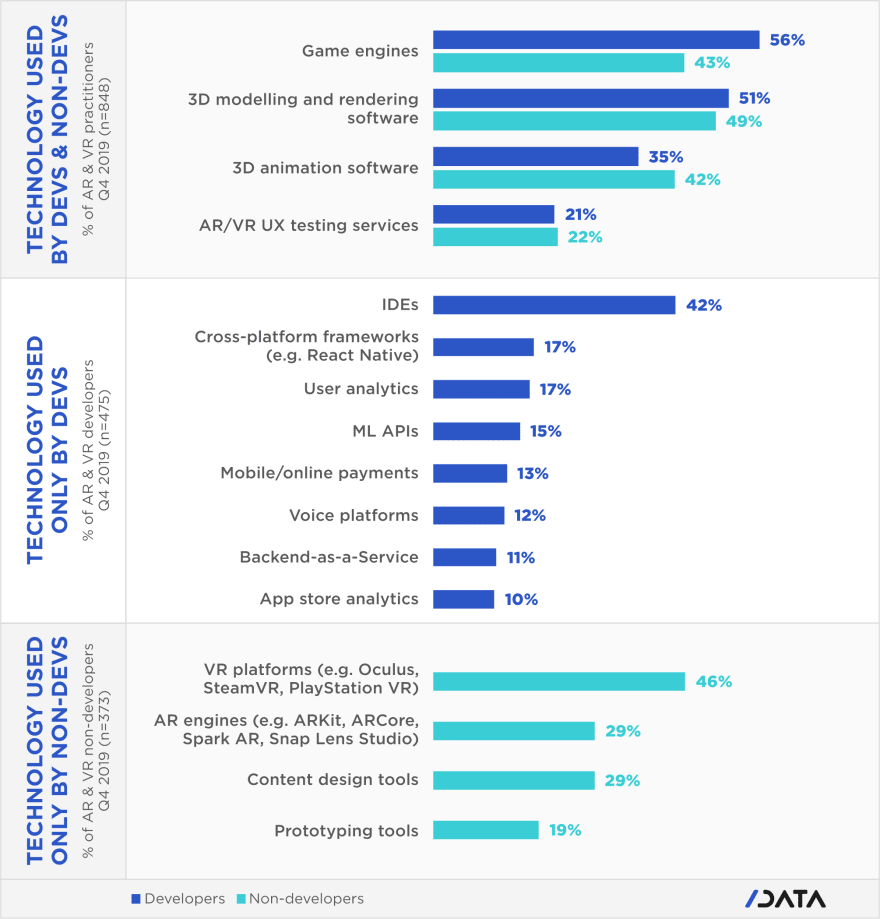 We see some overlap in the tools used by non-developers; 49% use 3D modelling and rendering software, 43% use game engines and 42% use 3D animation software. The high usage rates of the more artistic technologies is to be expected, given that these people are, by definition, not developers.

This is the third post in our AR & VR practitioner series. You can view our earlier post here. In our next post we'll be addressing how many non-developers are learning to code. Be sure to follow us to be notified when it's live.

Got something to say about AR/VR? Share your thoughts below.

Our State of the AR/VR survey is live. Spend less than 10 minutes and shape the future of Augmented and Virtual Reality. We have some awesome prizes up for grabs - an Oculus Quest, iPhone 11, VR Ninjas mat, and licenses to be used with Vuforia, Sketchfab and OctaneRender Studio.

Developer Nation
Our mission is to champion a global collective of software creators who are confident in their technology choices and feel included in the conversation about the future of the ecosystem.
Where do game developers run their code?
#gamedev #analysis
AR Engines, tools and SDKs
#arvr #ar #engine #resources
[SERIES] Did you know? Games is the most popular app category for developers and non-developers alike?
#gamedev #game #ar #arvr