Leave Me Alone was featured in Lifehacker and recommended in a newsletter with 28k subscribers within the space of 5 days. This post is a breakdown of the traffic, sales, and other statistics from this crazy period.

On Sunday 22nd September we were getting ready to go to sleep when Leave Me Alone started receiving an unusually high number of pageviews and payments. We couldn’t tell where they were coming from, but there were several referrals from gm.android.google.com which is the Gmail Android app. This meant that it was probably a mailing list, but we didn’t know which one. 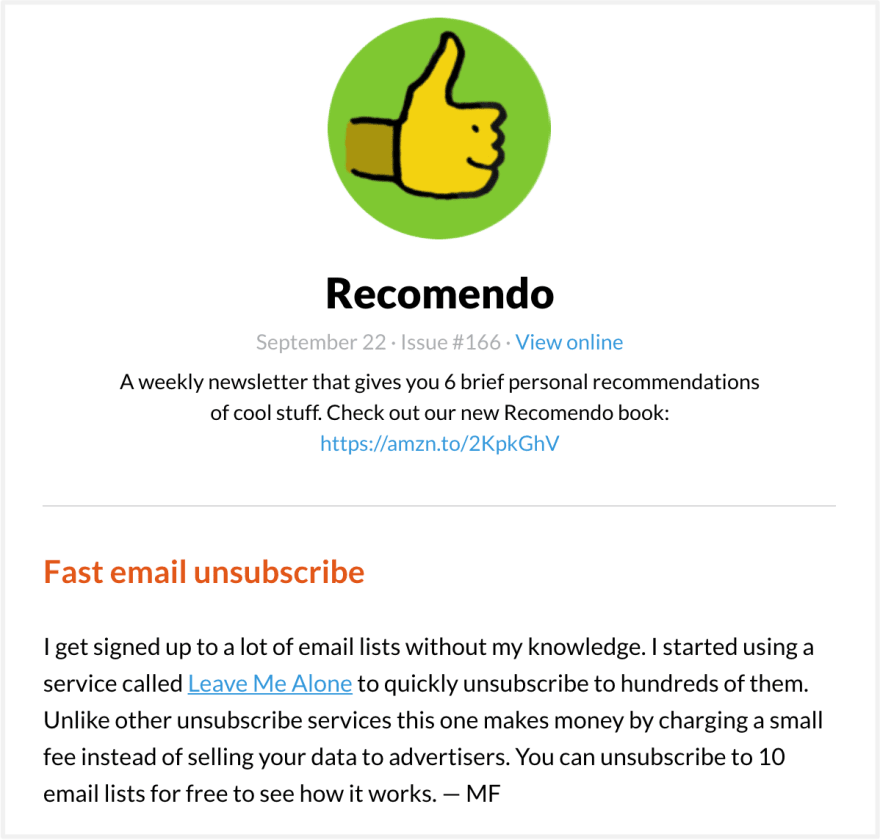 After digging into some of our own referral stats we found that it was this newsletter from Recomendo, and that they had nearly thirty thousand subscribers! The quality of the traffic must have been really high, because we went to sleep and 12 hours later woke up to 624 visitors, 271 signups (43%), and 24 sales (8% of signups or 3% visit to sale). We also scanned almost 2 million emails and unsubscribed people from 6,521 of them!

We had another spike of traffic and sales on Monday evening (in Bali) and we assume that is because our Western friends in San Francisco were waking up and checking their emails from the weekend! Overall for the 2 days combined we got 498 signups, 62 sales (12.5% of signups), $378.9 revenue, and 1 new teams customer. Plus, we scanned 2.9 million emails and unsubscribed people from 9,835 of them!

The irony of a newsletter driving traffic and sales to Leave Me Alone is not lost on us, but we are not against newsletters, we only want to help people clear out unwanted ones! Not all newsletters are bad, in fact I am subscribed to several which I enjoy receiving and reading, but I need a good clear out fairly often because the ones I’ve lost interest in just pile up.

Leave Me Alone was Featured in Lifehacker!

Two days later, during another late night for us we saw another spike in traffic. It wasn’t coming from the newsletter this time, we had been featured in Lifehacker!!! 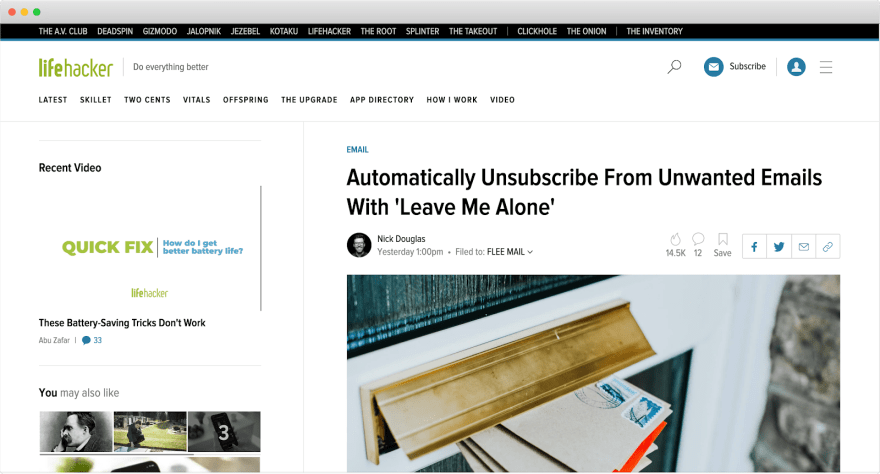 We weren’t sure if we should go to sleep just in case anything went wrong, and it turns out we were right to have concerns! Lifehacker had given us the “hug of death”. We awoke to find our server had fallen over and people couldn’t access the website.

One of our processes randomly span up to 100% CPU for an extended period of time and the server stopped accepting connections. Unfortunately, this effect cascaded down to the web server. It was fixed in 20 seconds with a reboot once we woke up that morning.

After some investigation we think it was caused by a single rogue mailing list. When someone tried to unsubscribe from that list, it created an infinite loop, and refused to die. We have now deployed some tweaks to our unsubscribe bot so it hopefully it shouldn't happen again.

The server started slowing down at around 4:30am, and we woke up and rebooted it at about 7am, so this wasn’t great but Leave Me Alone wasn’t down for long. 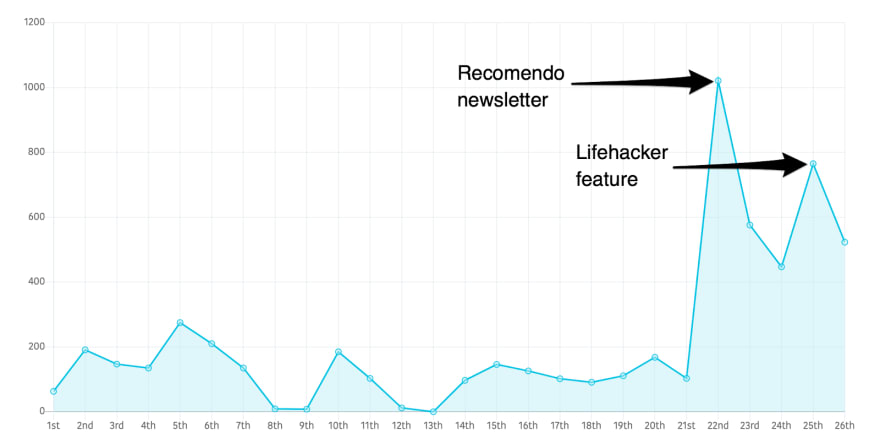 The Lifehacker spike is actually lower than the Recomendo newsletter. This could be because the audience from the newsletter was already more qualified, or that 2 1/2 hours of downtime lost us a chunk of Lifehacker traffic - it would have been prime afternoon time in San Francisco, or more Lifehacker readers have trackers disabled. We received more signups and sales following our feature, so I guess we will never know!

That said, the traffic kept coming. I can’t separate the stats for Recomendo and Lifehacker precisely, but my best guess for the Lifehacker feature is 559 signups, 85 sales (15% of signups), $507 revenue, and 2 new teams customers. Plus, 3 million emails scanned and we unsubscribed people from 9,779 of them.

That brings the grand total for 5 incredible days to 1,057 signups, 147 sales (14% of signups), $862 revenue, and 3 new team customers. We scanned a total of 6 million emails and unsubscribed people from a huge 19,614 mailing lists. I can’t believe that in 5 days our customers unsubscribed from nearly 20 thousand emails!

I analysed some of these numbers and found some interesting stats. For each of these values, the average number per user has remained consistent.

The average number of unsubscribes per user is 19, which is probably related to the number of free credits we give away. 20 credits can be earned for free fairly easily by connecting additional accounts, setting a reminder, and tweeting about us. We are not changing this, we are happy with our decision with this.

Free credits for connecting additional accounts encourages users to scan more of their email addresses in one place, setting a reminder increases returning customer rates, and tweeting about us helps to spread the word about Leave Me Alone.

For this period revenue per user is much higher at $0.84 than on our open page which shows the all-time average. This is really good for us and our growth moving forward. We think this has increased since we changed our pricing to credit-based, since we demonstrate more initial value to the user, they are more likely to purchase a package. We are going to add revenue per user to the open page as a graph, so that we can track this stat historically, and hopefully see an upward trend!

Just before both of these feature happened we changed signing up to our teams plan so that it is now possible via self-serve, and we got 3 new subscription customers from this press!

We initially thought that Leave Me Alone for Teams needed a manual onboarding process for people to understand how it worked, but we added a team specific onboarding process, and we haven’t had any questions or support requests so far!

Growing our monthly recurring revenue is important moving forward, since it is a more sustainable form of income for us, that means we can continue to work on improving Leave Me Alone for all of our customers.

Just a stroke of luck

We didn’t reach out to Lifehacker, we think they picked us up from a combination of the Recomendo newsletter, Indie Hackers, and social media.

These features, and previous ones in Fast Company, the Register, and Makermag, have really helped us. The best part is that the traffic and sales increased at the same rate, so we just need to find a way to get more traffic, and our revenue will continue to grow.

Popular publications featuring your product should be a nice boost, but it wont help in the long run if the product isn’t something people want to use and pay for. This week has been an absolute whirlwind of emotions! There have been very few support requests, the server only died once, and people are sharing our product!

We hope that this will continue. Thank you to every single one of you for following our journey and making articles like this possible!

Once suspended, dinkydani21 will not be able to comment or publish posts until their suspension is removed.

Once unsuspended, dinkydani21 will be able to comment and publish posts again.

Once unpublished, all posts by dinkydani21 will become hidden and only accessible to themselves.

If dinkydani21 is not suspended, they can still re-publish their posts from their dashboard.

Once unpublished, this post will become invisible to the public and only accessible to Danielle.

Thanks for keeping DEV Community safe. Here is what you can do to flag dinkydani21:

Unflagging dinkydani21 will restore default visibility to their posts.