Normally, beginning your journey with CSS entails a steep learning curve. However, mastering CSS is hard since it is such a broad topic in itself. The field of applications is diverse, thus understanding the basics helps you to become a more productive developer.

As a reminder, take a look at the structure of a CSS rule.

If several CSS rules target the same HTML element and these rules constitute definitions with one or more mutual CSS properties, which styles are applied by the browser in the end? This is where CSS precedence comes into play.

Examples help to make complex situations more understandable. Take a look at the following code snippets (or play around with the Codepen).

Several interesting things happened here. There is no selector that explicitly target a h2 element to assign a font color. However, the red color of the sidebar title was inherited by its parent element (aside). The second CSS font-family declaration (h2 selector) was not applied by the subline element because the .subline selector was considered as more specific by the browser.

All these aspects are considered to determine which CSS declarations for every DOM element have to be applied. If multiple CSS declarations (e.g., font-family: serif; and font-family: sans-serif;) with the same CSS property (color) are found to target a particular DOM element (e.g., the sidebar title), the browser creates a precedence order. Thereby, the property value with the highest precedence gets applied.

As you can see from this simple example, many aspects play a role in the browser process of determining the actual CSS styles. To be more specific, the following concepts are part of the precedence algorithm:

Take a look at the following CSS snippet. It shows a bunch of selectors to style li elements.

The corresponding HTML elements are shown next.

If you specify multiple selectors to target the same HTML element, the browser picks the selector with the highest specificity value.

The Specificity Calculator is a nice online tool constituting a visual way to understand this concept. 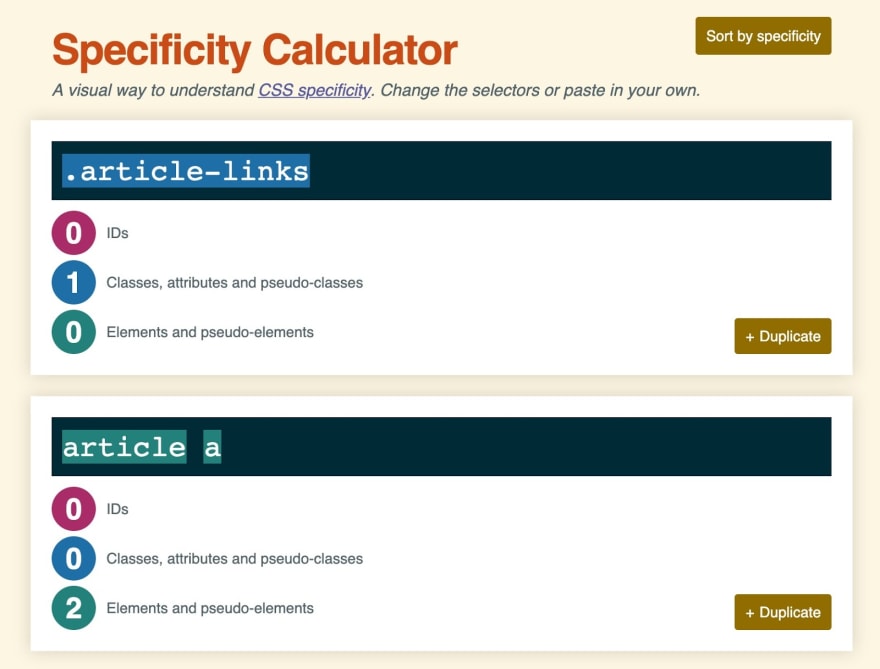 The first selector has a higher specificity because classes are more specific than elements.

You can think of selector specificity as a row vector of 4 elements as depicted by the illustration of CSS Tricks. 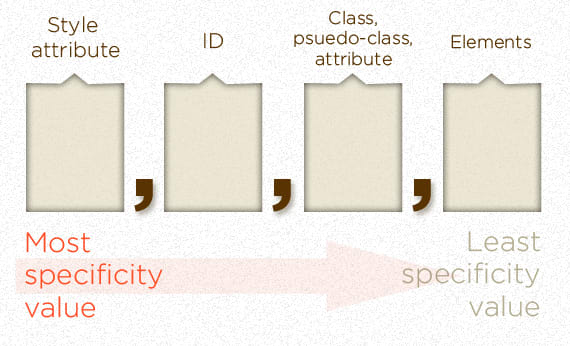 Take a look at the following example that consist of two special cases.

The universal selector (*) has a specificity of (0,0,0,0). The !important keyword beats everything, thus use it with care (or better don't use it). In the example, every h1 element has a green color, even the element with the id title. To override such a declaration, your only chance is to specify another declaration with !important, so order is relevant. 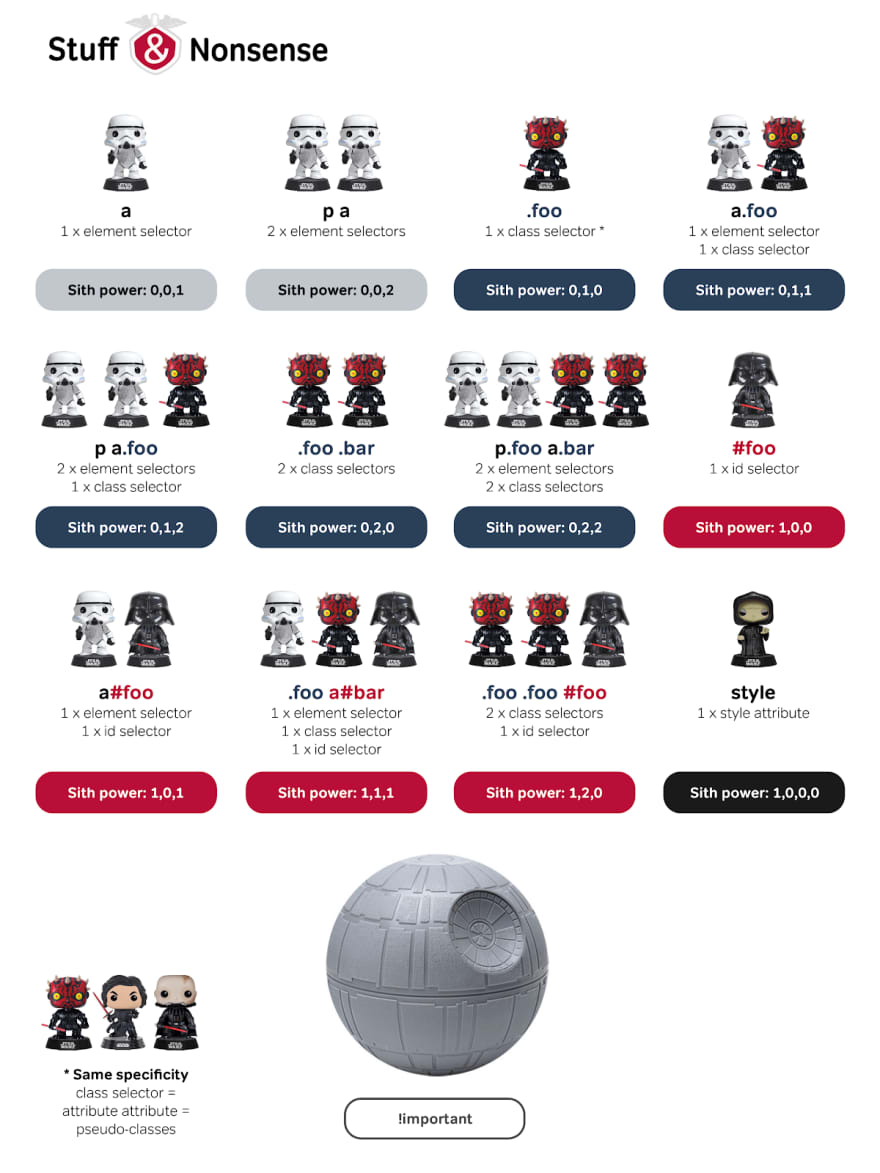 It is a fun way to learn the concept of specificity. I also recommend Emma Wedekind's in-depth explanation of CSS specificity. 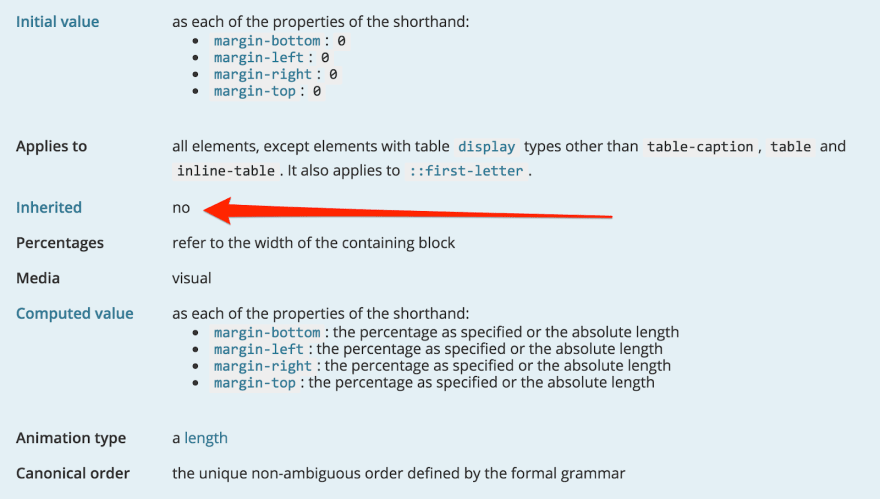 A comprehensive list of all CSS properties with information about inheritance provides W3C. 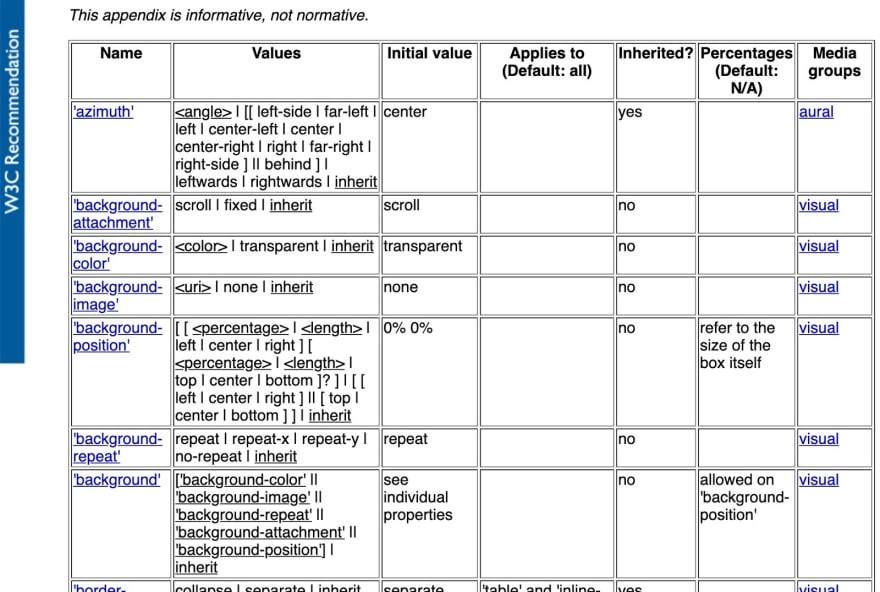 By using the inherit keyword, the margin property value of the article element gets propagated to the p element. In contrast, the h2 element does not inherit the margin value of its parent since margin does not get inherited by default.

CSS stands for Cascading Style Sheets, so it is not surprising that the cascade plays an important role. This algorithm calculates the above explained precedence for all CSS declarations. Thereby, it also considers specificity and inheritance to determine which styles are applied to every HTML element of your HTML document.

The simplified algorithm looks like this (for complete details refer W3C specification). The algorithm is executed for every HTML element:

The following illustration explains the algorithm in a nutshell. 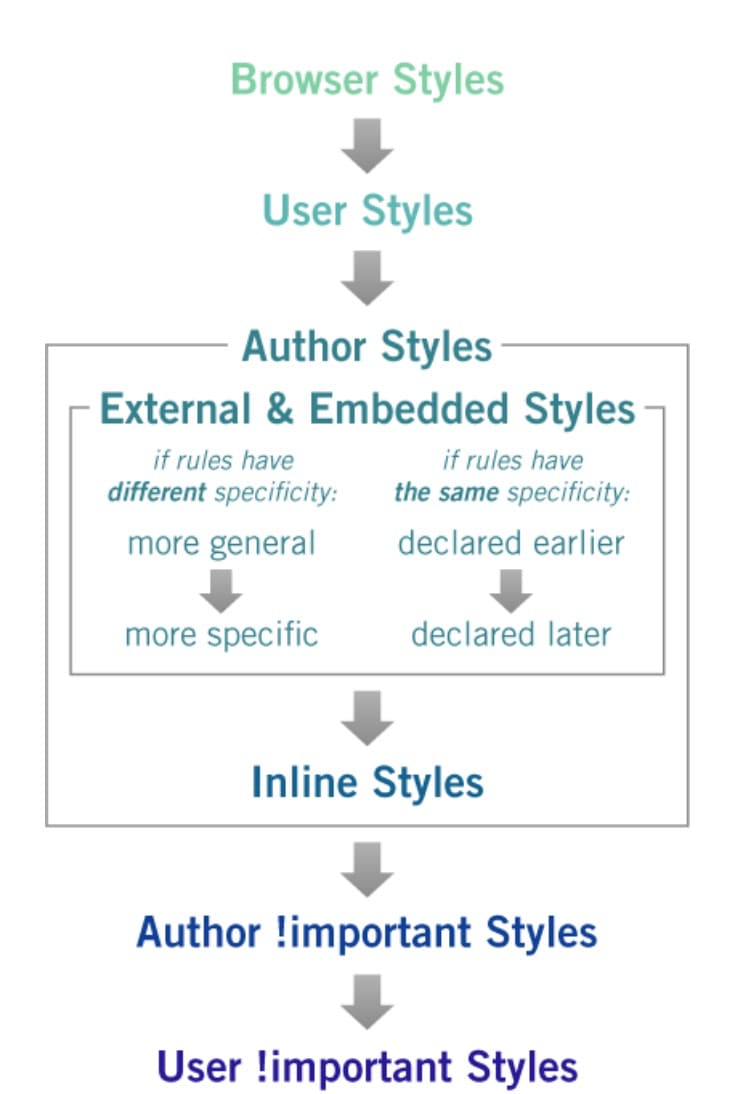 Let's briefly discuss how the cascade effects on inheritance. What happens if you have two ancestors of an element with the same properties that gets propagated down the document tree due to inheritance? Ultimately, the property values of the ancestor that is closest to the element are applied.

If you would like to have another perspective on the cascade, I recommend Benjamin Johnson's article.

Developer tools of modern browsers are very helpful to grasp the concept explained in this article. The next annotated screenshot shows how information regarding inheritance and precedence (crossed out declarations, origin of styles, etc.) are visualized by Chrome dev tools.

This picture constitutes a screenshot of a Codepen with annotations to show why which CSS declaration is applied or not applied by the algorithm. Concrete, the annotations represent the analysis for the <h2 class=”subline”>Subline</h2> element (marked by blue arrow).

The cascade is the system managing styles from multiple sources and determines what declarations take precedence in case of conflicts. The cascade algorithm considers styles that are directly applied to HTML elements as well as styles for HTML elements that are not explicitly defined (i.e., inherited styles).

Especially for beginners, it might not be clear that the cascade "collect" styles from different sources: explicit defined, inherited, default styles, etc.

IMHO a solid understanding of the cascade algorithm is the key for becoming a better Web developer. If you understand how the browser applies styles to HTML elements, you can avoid frustration in development projects (e.g., unwanted applied styles or side effects).

It turns out that the cascade algorithm is actually easy to understand and memorize. Most of the time, you only deal with author styles so the number of rules to remember is not that large. If you are familiar with specificity and inheritance you are good to go. Further, if you have a good CSS design you do not have to think much about document flow because you most likely do not spread styles all over your stylesheet files.

How to create a Preloader in NextJS

The css chrome dev tool you didnt know of