Where I work at (a small-medium startup called Spot.IM) we use Webpack to bundle our products. After about 4 years and who knows how many hands contributing to the source code, our main product's build time reached a staggering 90 seconds for initial build and 14 seconds for re-build.

That's 14 seconds you had to wait every time you hit save.

Applying some easy wins which anyone can introduce to their stack we were able to slice those numbers down to 20 seconds for build and 1 second for re-build.

In this post I will go through some simple changes you can make to improve your bundle's build time.

Note: If you are using Create React App (or any other fancy app generator) this post probably won't matter that much to you, if not it might help a lot, so keep reading!

Before we do anything, let's set up a way to measure our improvement. To do that we'll use a tool called speed-measure-webpack-plugin:

We wrap the Webpack config file with SMP (which we enable through an environment variable), later we pass that config object to Webpack, which will then print a nice report specifying each loader's processing time per each build. This way we win in two frontiers, one is that we get immediate feedback to our optimization attempts and the other is that we instantly get a full report of how long each loader (or actually "chain of loaders") took: 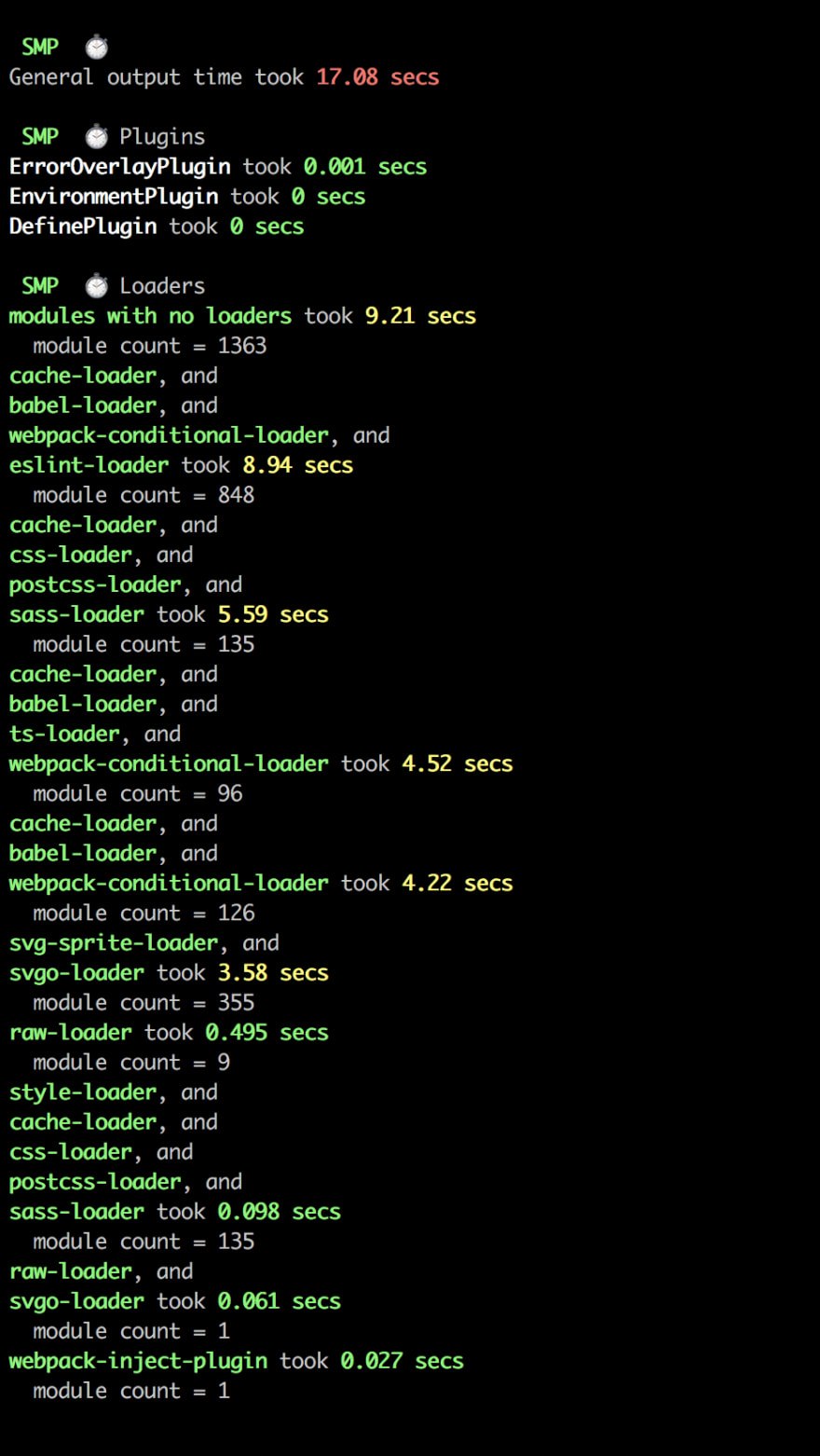 After setting up SMP, we can start seeing how our build time changes as we make improvements, the first thing we'll tackle is the initial build time (i.e., the time it takes for Webpack to bundle our package since it has been initialized), we'll use a loader called cache-loader to do that.

Cache-loader is a Webpack loader that caches the results of loaders preceding it on disk (or database). Meaning the next time you run Webpack you'll (hopefully) see a significant improvement.

Adding it before css-loader (for CSS) and before babel-loader (for JS) we were able to shave off around 75 seconds from the initial build time.

Now let's tackle the re-build time, to do that we'll modify a property called devtool.

Within Webpack's configuration you'll find something called devtool, which according to the docs lets you:

Choose a style of source mapping to enhance the debugging process. These values can affect build and rebuild speed dramatically.

In other words, modifying it will change what type of source maps you'll get, and more importantly, how long you'll have to wait until you get it.

Playing with this one was a life changing experience. I really can't emphasize this enough. We changed it from source-map (which is possibly the slowest one) to eval-source-map and were able to improve our re-build time from 14 seconds down to 3.5 seconds.

There are 12 different variants, Create React App uses cheap-module-source-map, so play with it and see what's good for your needs.

What you lose here is the quality of the source maps generated, and you feel the degradation once you start debugging the code. Luckily, browsers right now are keeping up the pace with TC39, so (at least while developing) you don't really need to transpile a lot of your code. If you set Babel up so that it will transpile Javascript to the latest browser version (as CRA does) you should be fine, as the source maps won't be too far off from the code itself.

Here's how your babel.config.js should look like should you want to transpile to the latest browser versions:

And that's it. 3 simple steps and our build time decreased significantly. Next time I will share how we later added Hot Module Replacement, a configuration that helped save precious time and improve the feedback loop we experience while developing.

Learn From The Best

When approaching such a task, the first idea that comes to mind is to delve in Webpack's docs and see what we could find. But it's not the only one.

A different approach I found, that has really proven itself, was to go through webpack.config files of existing open source projects. Specifically, Create React App's one. There's a lot you can learn from it.

I will definitely keep this approach, of learning from the best, in mind in future tasks.

We were able to slice 2.5 more seconds, but it was by making a bunch of changes that were very domain specific, where the domain I refer to is our (Spot.IM's) needs. So sharing them down here just doesn't make much sense.

How to minify CSS files via CopyWebpackPlugin for Webpack5

Eldad Bercovici
Continue using GitHub Copilot?
#github #copilot #discuss
What project are you most proud of?
#productivity #programming #discuss #webdev
Side Project Sunday! What do you have going on?
#showdev #sideprojects #discuss #watercooler