This story is cross-posted on Medium as well.

Interested in serverless computing but don’t want to use some newfangled programming language like Python, JavaScript, or Go? Then why not write your serverless web app in Pascal? Let’s go back to the 1970s by taking a Pascal program from the definitive Pascal User Manual and Report, published in 1974, and deploy it to the Google Cloud Run serverless platform. Oh, and here’s a 1970s background music playlist to get you focused.

What’s that? You don’t have a need to run serverless Pascal? Then maybe you have some other legacy software in only executable form, or a language not widely supported by serverless platforms, or built out of several different apps. The techniques shown here can solve those problems, too.

Google Cloud Functions and similar serverless solutions make it extremely easy to deploy functionality to the cloud. You just write your application code, upload it to the service, and they handle deployment, provisioning, infrastructure, scaling, logging, and security for you. They’re wonderful, but require a trade-off. They will only accept a single program written in one of their supported languages. And Pascal is not (yet?) one of those supported languages.

But Cloud Run provides similar capabilities with a slightly different trade-off. You can use other languages (like Pascal!), executable files, or multiple programs but you need to provide a container, not just source code. That’s a little more work, but less than you might think, because Cloud Build will do it for you. And you get all the normal serverless benefits like automatic scaling (even to zero when your code isn’t running). Let’s see how.

The sample project repository is on GitHub. Take a look at it. The README file is displayed and there’s a big button near the top of it:

If you have a Google Cloud account, such as a Gmail account, you can click that button, answer any prompts it displays, and in a few minutes you will have a running web service built from the Pascal program in the repository. The URL will be displayed when the service is deployed.

You can fork this repository and change it to run your own Pascal code (or, with a little more tweaking, any other code) and launch your own new service the same way. It’s even possible to make the service run at a URL on your own domain.

I’ve taken a Pascal program and deployed it to Cloud Run as a web service. It takes a number and returns the same number, but in Roman numerals. Want to see what 1974 (the year the program I’m using was published) looks like in Roman numerals? Just call the RESTful service via https://roman.engelke.dev/1974 to find out. Or you can put a different number in the URL to convert it. This program doesn’t use Roman numeral shortcuts (like IX for 9) so there can be four of one letter in a row.

To build this from scratch yourself, first create a new folder to hold all the pieces, or simply clone the GitHub repository to a new folder with the command below: 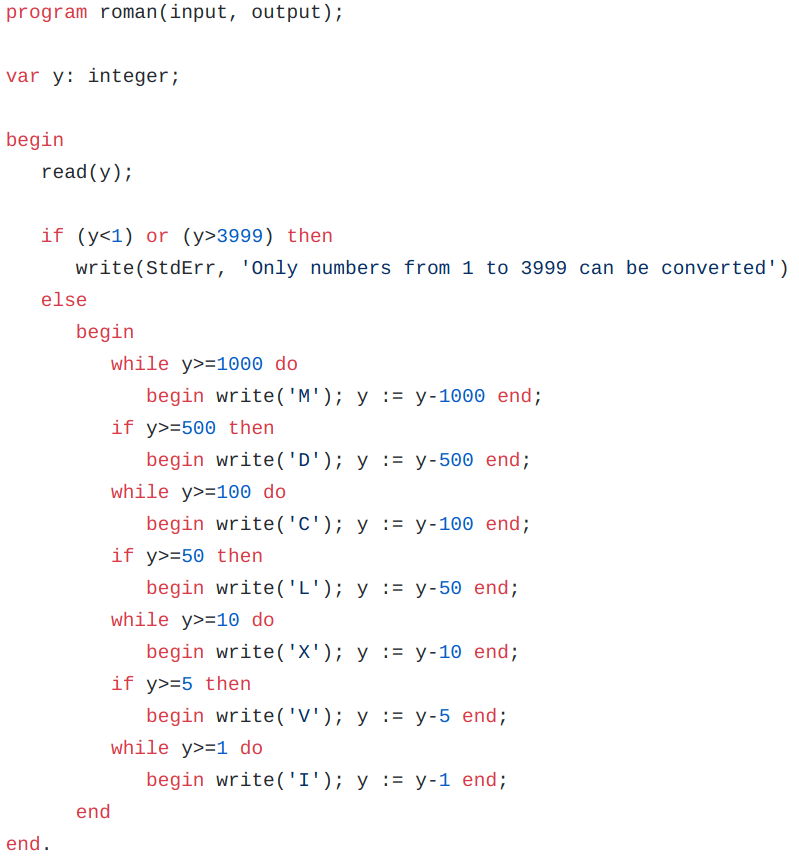 Clean and simple, and look: clauses are separated by semicolons and the program ends with a period! Newer languages aren’t so well punctuated. All this program does is read an integer from standard input and write the Roman numeral equivalent to standard output. No modern web technology is needed for that. Which is good, because Pascal is decades older than the web. It’s even older than the Internet Protocol, IP.

Along with the Python wrapper program there is a requirements.txt file that specifies which Python libraries are needed by the program. Again, this is just needed to wrap around the real program we need to run, which is in Pascal.

The only other thing needed is the Dockerfile, a text file that tells how to build the container. Let’s take a look at it.

If you take a look at a basic Cloud Run quickstart tutorial, you’ll see most of these pieces in it. The only new part, which is needed to run the Pascal code, is the three lines that install and then run the Pascal compiler to turn the Pascal source into an executable file.

Once you’ve created or cloned a folder with the four needed files: roman.pas , app.py , requirements.txt , and Dockerfile , you can deploy it to Cloud Run. You will need a Google account (such as a Gmail account) and you can either install the Google Cloud SDK or your own computer, or use Cloud Shell (which already has the SDK installed) from inside your browser to run the necessary commands.

Ready? Here are the steps:

You now have a 45 year old Pascal program running as a serverless cloud app. Maybe you don’t need that, but some day you might need something else that’s a bit outside what most serverless platforms support, but which you can do in a container. That’s when Cloud Run will pay off for you.

Your deployed app’s URL will be provided by Google, but you might want a friendlier option. You can connect your app to a URL on a domain you own if you’d like. It’s a bit tricky, but if you have set up your own domain it shouldn’t pose a problem. I did it, and my Roman numeral service is available at roman.engelke.dev, e.g., https://roman.engelke.dev/2345.

One of the slowest parts of building the container in this example is installing the Pascal compiler. I could have compiled the Pascal program on my own computer and used the executable instead of the source code in my folder when doing the build. That would let me skip the steps that install the compiler in the container. But since building a container happens rarely, I decided I’d rather be sure that my latest source code was always being used by compiling it as part of that step.

This tutorial uses fully managed Cloud Run, which has Google handle all the work for you. But you can also deploy to Cloud Run on GKE, either on Google Cloud Platform or even on your own premises, if that’s important for your app.

Living with a low profile

Once suspended, engelke will not be able to comment or publish posts until their suspension is removed.

Once unsuspended, engelke will be able to comment and publish posts again.

Once unpublished, all posts by engelke will become hidden and only accessible to themselves.

If engelke is not suspended, they can still re-publish their posts from their dashboard.

Once unpublished, this post will become invisible to the public and only accessible to Charles Engelke.

Thanks for keeping DEV Community safe. Here is what you can do to flag engelke:

Unflagging engelke will restore default visibility to their posts.