It's no secret that Kubernetes has seen a booming interest in the past year or two. It's also known that its learning curve is steep and its complexity remains relatively high. Because of this I've been interested in striking a simpler alternative in Docker Swarm for a while now. The following is my experiment for setting up a Swarm cluster that is able to publish different services using Let's Encrypt SSL certificates with ease.

I'm not going to talk about the good Kubernetes brings to the table (it's actually plenty of good), if interested you can look that up on your own. I'm just going to list a couple of benefits of Docker Swarm since they are the reason I chose to start dabbling on this topic:

Despite these (and probably other reasons) the most important for me is: I want to do less ops. I can't stress this enough, since I'm using this project to host my blog and other side projects. My primary objective is to focus on the development of these services and not on keeping up with state of the art container orchestration.

If "the buzz" is on Kubernetes while Swarm is considered boring technology, then good! That's aligned with my needs, which are clearly not the same as a company with employees working full-time on Ops/DevOps.

Gateway to our inner network of services 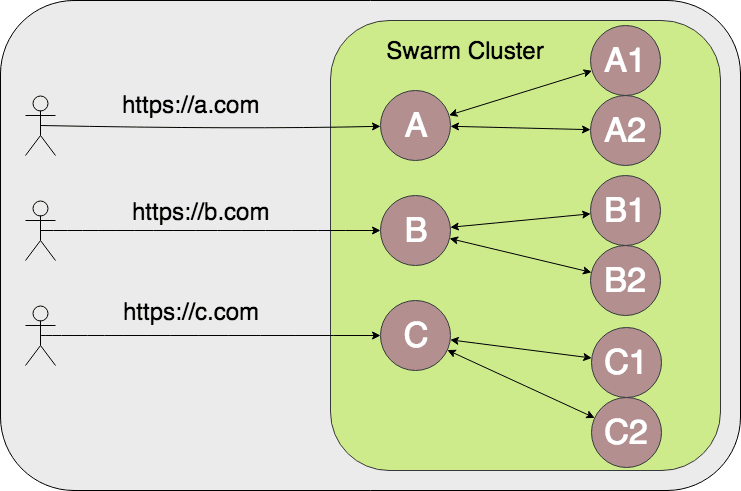 There are many different ways we can achieve this. However, we do want a way to make each domain accessible with HTTPS using Let's Encrypt. Since this wasn't easy (at least I couldn't find it possible) with existing tools I coded a very simple CLI that would help automate this: lecli.

Also, based on a previous attempt I posted a while ago I decided to receive all incoming requests in a small NGINX container. This entrypoint will handle TLS and reverse proxy to the respective A, B, and C service. This would actually make all services private, and the only public facing service with access to ports 80 & 443 would be the reverse proxy.

So, a sample NGINX config snippet file to make this happen would be:

HTTPS requests will be served from port 443 using Let's Encrypt SSL certificates. Since this NGINX proxy will be another container inside our cluster we will need to create it's image from a Dockerfile similar to this:

I know this may seem as plenty of moving parts, bear with me though. At this point we have a Dockerfile to create a reverse proxy that will do 3 things:

We can now proceed by creating a GitHub private repo with the nginx.conf and Dockerfile for versioning. All we need is the support server to periodically renew the certificates (lecli), then build this small reverse proxy container and redeploy it on our cluster.

The support server (on DigitalOcean)

I know this is lazy naming and there could even be a better way to include this server functionality into the cluster without the need of a separate server instance. But this is a nice balance I found between ease of setup and cleanliness after experimenting different approaches (yes, both are subjective).

In the end, plenty of cloud providers will give you instances for $5/month or less so it shouldn't be a big deal... Sign up with this link and get $10 free on DigitalOcean to kickstart your experimenting! (which will help me out too :winkwink:)

Now back to it, this support server will have a cron job that will execute the lecli CLI. Head over to that repo and take a look at the README to understand the basics of how it works. Besides installing it with gem install lecli, you'll need to create a build_proxy.sh script to be executed after lecli has successfully generated new certificates. Something like the following:

What's inside the deploy_stack.sh file? It's just a simple script to redeploy the stack on the Swarm cluster. That means that the new container image will be pulled from ECR and then a new reverse proxy container with the updated Let's Encrypt certificates will be used. deploy_stack.sh can look something like:

Again, this script is run on the Swarm manager which will gain access to ECR (to pull the new container images available) and redeploy the stack defined in the docker-compose.yml file on the cluster.

So far I haven't talked about how to layout your stack, and I won't. You can read the Swarm Docs or my previous post on load balancing on a Swarm cluster for ideas (stick to the docker-compose.yml file section but be aware a newer version syntax is out).

So by now you should have:

You now need the support server to respond to those requests. This can do the trick:

Now just make sure the simple-server containers' volume matches the challenges_relative_path so the lecli CLI tokens are accessible when requested by Let's Encrypt.

That's it! Your cluster's reverse proxy is relaying Let's Encrypt requests to your support server.

I omitted the way IP addresses are pointing to your cluster, because the reverse proxy has to be on a specific IP address and your domain DNS record pointing there. Or does it?

A simple way to make this work would be using the options available for the docker-compose.yml services placement. You could set a single dedicated worker node to host the reverse proxy container. This way you know on which droplet to find that container and use its IP address for your domains' DNS records.

Regardless of the technique to be used there are pros and cons, mostly regarding possible downtime of the droplets used as entrypoint.

Since I don't face heavy traffic on my projects, my solution went towards housing the reverse proxy on the master node. This isn't recommended for important production settings because if your only manager node goes down it will take along with him your only entrypoint. However, this is very easy to setup using the placement constraint from the reverse proxy service as:

The cluster topology would look like the following diagram, with each service in containers distributed throughout worker nodes: 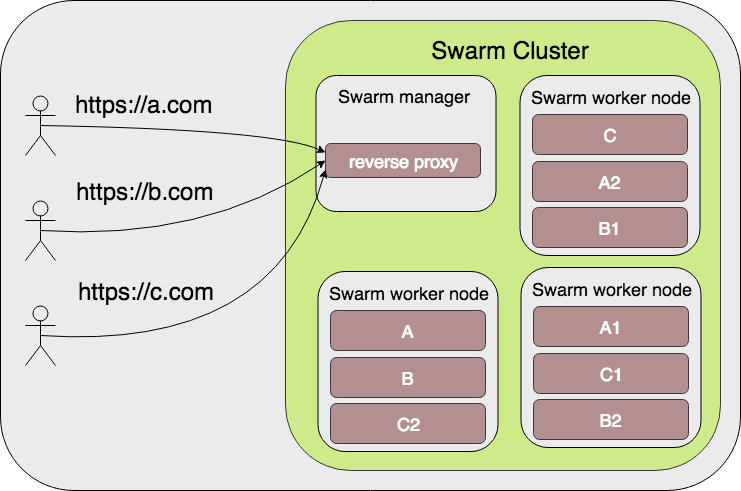 It's not difficult to see the bottleneck or single point of failure here. As stated before, if for whatever reason the manager node fails your entire cluster is out of reach. Under heavy load a single machine would have trouble keeping up, more even being such a crucial part of your infrastructure.

In the end we all strive to have services with millions of users, right? We would be forced to scale our infrastructure to keep up with them as we grow, so I do have a topology that relies on these same principles but will provide a more scalable solution.

As a disclaimer I haven't put this proposed solution to practice so it remains to be tested in a real life scenario. I'm open to suggestions on alternative approaches, but hear me out on this one...

There are certain best practices when implementing high availability on Docker Swarm, like having multiple manager nodes and not placing any workload on them (configurable on docker-compose.yml).

The problem with this solution is we can no longer rely on the DNS record to forward towards all worker nodes' IP addresses. But on DigitalOcean we can use their Load Balancer service (or an alternative like ELB on AWS)

The topology should now resemble the following diagram 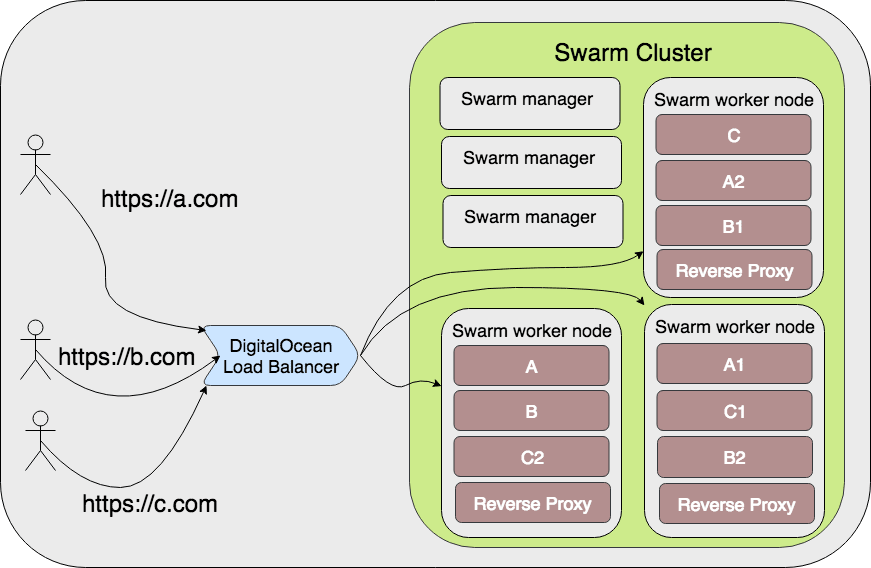 More complex setups could be set in place if certain workloads take over some node's capability to reverse proxy. But the layout and its setup would remain fairly similar, so no need to elaborate on that now.

I don't recommend this for a production system with heavy traffic. There are things that could go wrong and are generally better implemented in Kubernetes. However, for side projects and other smaller implementations it's a relatively easy way to manage a cluster, run your container workloads and host webapps in an efficient way.

There is nothing too scary here for someone with some general SysAdmin/Docker knowledge. Also there's no need to keep up with the fast paced Kubernetes ecosystem. Again, don't get me wrong, Kubernetes is most likely the "best tool for the job" on most cases, just not for everyone and certainly not me (at least for now).

I have my repositories setup with CI/CD using CircleCI and a bit of ducktape (a.k.a. bash). Still relying on the previous topology example: A PR to the service "B1" will trigger CI. Whenever that PR is merged into master a container build is triggered (you guessed it, in our support server) and deployed to the cluster as well. This makes all the effort to setup the "containerized service paradigm" worth it.

A blog post on this (way easier than this cluster setup, all downhill from here I promise) will hopefully come in the near future. Until then it would be great to hear feedback and alternative setups, Pura Vida!