This is the second of a series of posts regarding mobile marketing industry changes presented by iOS 14. Read the first article about the SKAdNetwork framework here.

In my last article I went into detail about the structure of the SKAdNetwork framework. Today I'll continue by explaining how postbacks and conversion tracking work with this new framework. 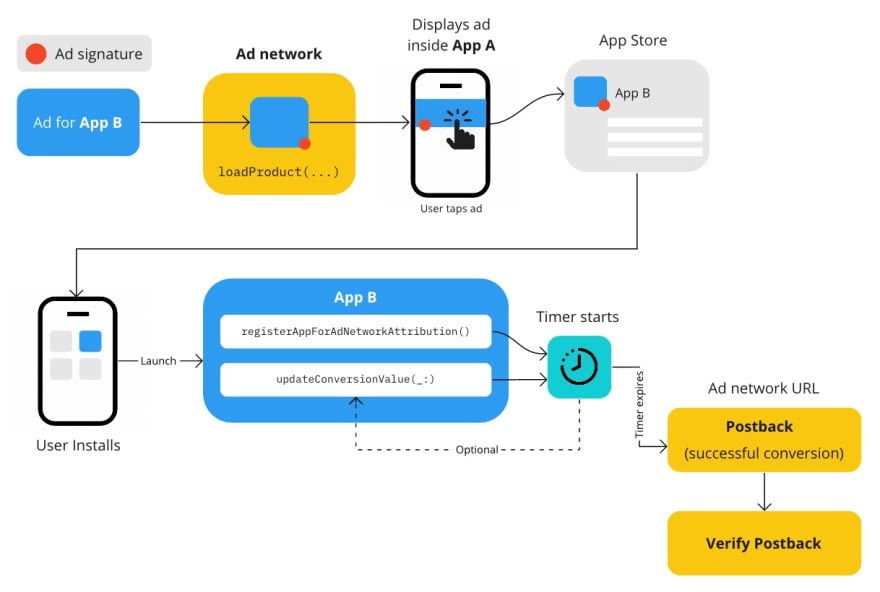 The initial user journey is the same: ads are served by ad networks to users, who click to install an app. The real changes begin when the user actually converts. There are two ways to send conversion postbacks via the SKAdNetwork API:

The first method is recommended for when the user first launches the app. Once the app is launched, an activity window of 24 hours begins and the second method can be used to monitor user activity. SKAdNetwork allows you to attach events to 6-bit integers (numbered 1-64). When these events are triggered by the user, the integer is passed to the second method and the activity window restarts. This continues until 24 hours pass without the user triggering an event with a 6-bit integer value greater than before.

Take a hypothetical gaming app, SKN Games, as an example. In this app, each level is mapped to a 6-bit integer value in SKAdNetwork (level #1 has a value of 1, level #2 has a value of 2, etc.). Whenever a user completes a level (through level 64) it triggers a conversion event. The conversion window would work something like this:

The postback received by the ad network will take the following JSON form:

This shows that for each converted user, the ad networks will only receive:

This new information is fundamentally different from the view-thru attributed data mobile marketers currently have access to. With no IDFA, aspects of campaign structure will need to change to make use of this new information.

But why is the IDFA no longer usable? To understand that, it's important to learn about AppTrackingTransparency, which I will explain in more detail in my next post.

To learn more about Xyla's reporting capabilities under iOS 14, reach out to us.

Is M1 a good choice for developers?

TIL: How to add spaces to the dock on MacOS

Gregory Klein
I am a Co-Founder and the CTO of Incipia & Xyla.
What App Tracking Transparency (ATT) Means for Mobile Marketing Attribution
#ios14 #idfa #apptrackingtransparency #skadnetwork

Once suspended, gklei will not be able to comment or publish posts until their suspension is removed.

Once unsuspended, gklei will be able to comment and publish posts again.

Once unpublished, all posts by gklei will become hidden and only accessible to themselves.

If gklei is not suspended, they can still re-publish their posts from their dashboard.

Once unpublished, this post will become invisible to the public and only accessible to Gregory Klein.

Thanks for keeping DEV Community 👩‍💻👨‍💻 safe. Here is what you can do to flag gklei:

Unflagging gklei will restore default visibility to their posts.