Sometimes in the world of legacy enterprise systems you're tasked with what sounds exactly like a problem on Code Signal or similar platforms. The task I ran into today went a little bit like this:

Given write a query to pull all rows/columns from the tables below where numbers and letters match. If a letter is null include all combinations of colors with shapes in the output.

The first thing that came to mind was a join of the two tables on the letters and number columns:

Hey, the number 1 and letters a and b look good! But where did our number 2's go? Ah yes, the letters are null for 2's in Table1 so they would be dropped when joined to Table2 whose 2's have letters.

So let's try that again, but forget joining on letters: 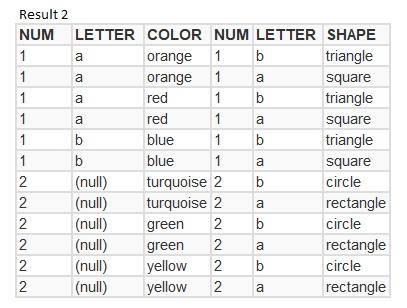 Yea, the 2's are back! Hmmm, we seem to have a lot of rows...looks like every combination of shape, color, and letter which is great for 2's but not so good for 1's.

So what we really need is to join on number and letter for 1's and number only for 2's. Enter the conditional column join.

A conditional column join is a fancy way to let us join to a single column and to two (or more) columns in a single query. We can accomplish this by using a case statement in the on clause of our join. 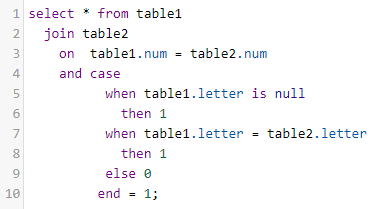 A case statement allows us to test multiple conditions (like an if/else if/else) to produce a single value. It's common to choose 1 or 0 (true/false) as the resulting value.

We then check if the output of the case statement is equal to 1 (the "end = 1" part of the join), if so the join between the two rows takes place, if not the row is dropped.

So in this case :) the case statement does the following:

Which results in our final answer: 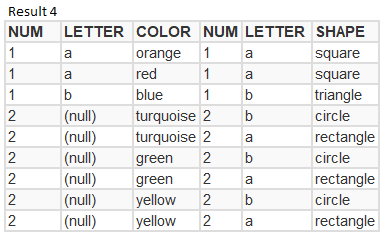 Try it out in SQL Fiddle for some more practice!

9 Common JavaScript Interview Questions You Might Not Know The Answer For.

Once suspended, gschro will not be able to comment or publish posts until their suspension is removed.

Once unsuspended, gschro will be able to comment and publish posts again.

Once unpublished, all posts by gschro will become hidden and only accessible to themselves.

If gschro is not suspended, they can still re-publish their posts from their dashboard.

Once unpublished, this post will become invisible to the public and only accessible to gschro.

Thanks for keeping DEV Community 👩‍💻👨‍💻 safe. Here is what you can do to flag gschro:

Unflagging gschro will restore default visibility to their posts.